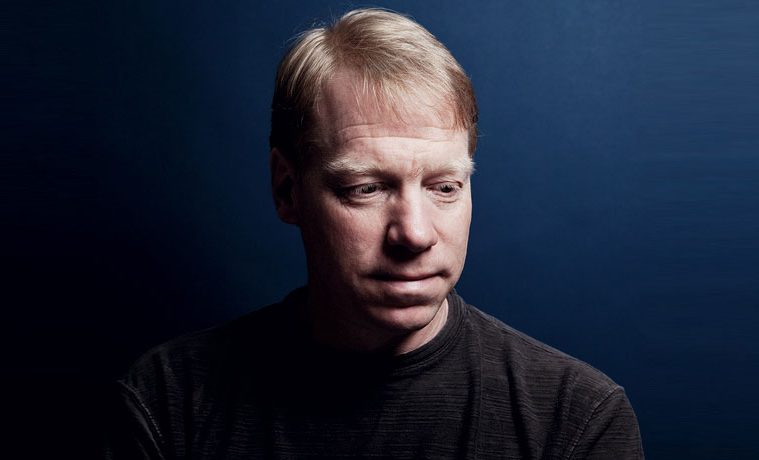 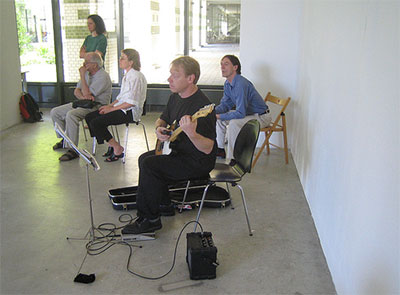 I used to have a rule about not listening to music on trains, but lately I’ve been breaking it. Composer and guitarist Michael Pisaro’s Gravity Wave recordings are almost perfect for commuting. His work mixes field recordings, sine tones, traditional instrumentation, silence, and noise into rich textures that demand attention and defy genre. Hearing Pisaro for the first time felt like hearing Morton Feldman for the first time, or seeing a James Turrell for the first time. It opens me up.

Pisaro is a member of the Wandelweiser composer collective, an experimental composing group that took the tradition of experimental music a la Cage and Wolff and expanded it in radical ways. For Wandelweiser, “experimental” is less a genre than it is a situation full of probabilities, procedures, and possibilities. Pisaro has taught composition at Northwestern University and is currently on faculty at CalArts.

On April 22nd, Pisaro will perform Violet Transmission (Grey Series No. 4) for electric guitar, noise, and sine tones at the James Turrell Twilight Epiphany as part of the Sound Observation concert series, co-presented by Nameless Sound and Rice University’s Shepherd School of Music. The program will also feature Slices of Cello and Prerecorded Orchestra by Alvin Lucier (performed by Charles Curtis) and Steve Reich’s New York Counterpoint (performed by Richie Hawley). I visited with Pisaro prior to his Houston visit.

A+C:  At the moment I’m writing this, I’m listening to your recording Fields Have Ears (6). The windows are open and I can hear the birds chirping and church bells ringing from across the street. The longer I listen, the more they feel like they are a part of the piece. How does the membrane between your work and your environment figure into your practice?

MICHAEL PISARO:  In many different ways. But my general interest is to reexamine ideas of space and time in the light of the sounding world. There are so many borders between what we (think we) make and the sounding world, that it seems each piece can take a slightly different angle on the question.

MP:  It was gradual. But encountering the work of Cage when still a teenager was probably the most crucial stage in that early development. While still in high school, I visited New York and happened upon an outdoor performance of one of Cage’s pieces. Actually, I wasn’t entirely sure if it was a piece, because it wasn’t always clear who was playing and who was a bystander. But sooner or later, it dawned on me that this was a real thing, a concert – and the indiscernibility between what was and was not a part of the piece was a part of its charm, and in retrospect, hugely influential. By the time his A Dip in the Lake was done in Chicago (in 1982, I believe during New Music America), I was complete convert.

A+C:  How important has collaboration been in your music?

MP:  Collaboration at a deep enough level where we can call it an “encounter” is more or less at the core of the way I work (especially if one includes the sound environment as a collaborator – as I certainly do). I have been extremely lucky in the people I’ve had the opportunity to work with. There are the people of Wandelweiser (especially Antoine Beuger, Jürg Frey, Manfred Werder, Marcus Kaiser and Radu Malfatti). And more recently, Greg Stuart, whose practice continues to be an immense source of inspiration for me. We function together as something other than composer/performer – it’s more like a tree that begins its division into roots and branches almost immediately. (Gilles Deleuze adjective for this is perhaps overused, but still appropriate and descriptive: rhizomatic).  The work with Taku Sugimoto, Toshiya Tsunoda, Antoine Beuger, and most recently Miguel Prado – to take recent larger scale projects has moved in this direction as well – with each person in a manner so different from the others as to not be directly comparable.

A+C:  In your essay Hit or Miss, you describe experimental music using a baseball metaphor. Writing about contemporary music almost has to be experimental in a sense, it’s own game of baseball. You pitch some ontology or metaphor and the reader swings at it. You’ve described yourself as a non-professional reader of philosophy. What influence have thinkers like Deleuze and Badiou had in your life? How does philosophy help us understand these things?

MP: That’s a big question! In philosophical terms, I’d have to say that Deleuze, Badiou, and most recently, Quentin Meillassoux have been absolutely critical in helping me to identify the problems that lie at the basis of our work: whether it be political, social (including in relationships with others), scientific or artistic. It has been my repeated experience that these (and of course other) thinkers find words and concepts for important things that would remain relatively unclear without that help. It’s kind of hard to say, exactly, how it works in me, but it definitely does.

Also, I read this stuff because I hope that by “brushing against” this kind of conceptual thinking, I can learn the process by which I can thinking clearly about my own work – at least at the conceptual level.

A+C:  The James Turrell Twilight Epiphany is such a wonderful space to hear music in. How do you go about preparing yourself for different spaces? Is there a special Turrell feel you get walking around in there?

MP: In this case, I came to visit Twilight Epiphany in February with some sketches for ideas I wanted to hear in what I imagined to be that space. But of course, as always, I discovered all kinds of other features that came to play a role. Most crucial, perhaps, was a sense that Twilight Epiphany seemed to be both a filter (of the noise surrounding the structure) and a “cauldron”, which seemed to funnel the intensity of the sky into a relatively tiny space. Both of these found expression in the piece I wrote.

A+C:  You teach at CalArts. What’s your process working with younger composers?

MP: Honestly, I just try to let them teach me about what they are doing. (I know from experience that it can help to have to clarify how you think about what you do to someone else). My knowledge and appreciation of what they do is the foundation of my support for them.

A+C:  One of the things I get caught up in is the divide between work supported by academic institutions and work done outside. I don’t think one is better than the other, but at times it can feel daunting to try and do work without traditional support networks. You seem to move and work fluidly between the two worlds. Do you have any advice for composers and musicians working outside of institutions?

MP: I’ve long thought that the academic world is basically the opposite of the creative world. The academy turns conjecture into knowledge, and creativity turns knowledge into conjecture. But not all academies are the same, some give the people who work and study there more room to follow their idiosyncratic impulses than others. I have nothing but respect for artistic institutions (like Nameless Sound) that focus on both creativity and teaching outside of the normal institutional structures. In the creative world we need them as much if not more than academies.

A+C:  What have you been listening to lately? Anything new and exciting on your radar?

MP: The most amazing disc I’ve heard so far this year has been Ryoko Akama’s Code of Silence: Unearthly electronic compositions that upend notions of stability and instability, peacefulness and upheaval. In general, I have a lot of time for the recent experimental work of younger musicians (there are way too many good ones to list – I started to do it and came up with 30 in about 5 minutes). I’d say it is the strongest generation of experimental musicians since those born in the 1930s. And I continue to find unending richness in the work of Toshiya Tsunoda – who produced three tremendous CDs in 2013.