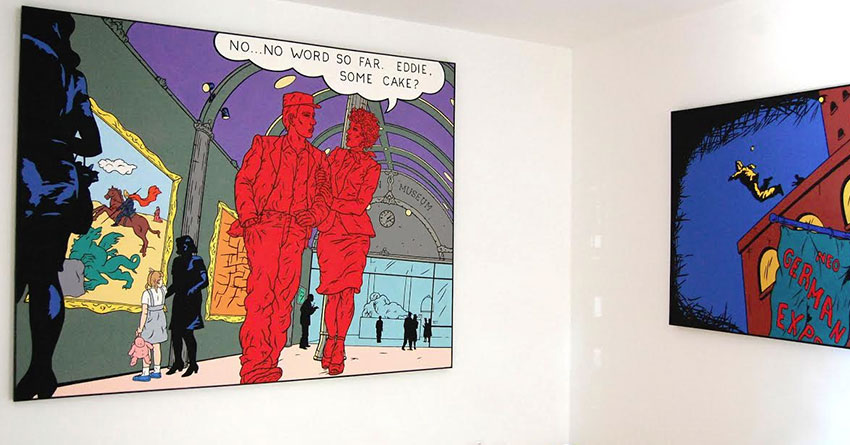 The Timelessness of Political Art 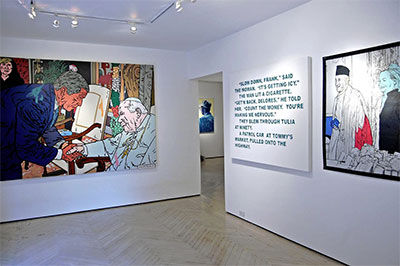 There’s an inherent danger in creating overtly political artwork: that once the germane event has passed into the misty abstraction of history the work could lose its critical potency; become misty by association.  Rudolph BlumeArtScan Gallery’s retrospective of painter Ed Blackburn is a lesson for would be “political” artists everywhere: a well-constructed painting rife with political barbs, interesting formal anomalies and art historical references will stand the test of time. (We don’t have to intimately know the whooshing sound of a guillotine to be moved by David’s Death of Marat, after all.) This show is a survey of thirty-odd years of the painter’s work, revealing an artist whose influences range from the art historical to the pulp. At Blume, the focus is on the political and pop-art influences in the artist’s work, with less attention paid to his broader interest in narrative (including film and biblical tales), but this focus sets up its own story, a slightly distilled version of one arc of Blackburn’s incredibly varied interests.

In this retrospective, passage of time is just another blade in the blender through which Blackburn’s paintings pass.  Elapsed years between a ubiquitous media image (as in Bush [W] meets the Pope), seem to further distort. The two cartoonish figures grow into their stylized and grotesque skins as history unfolds, the butterfly effect of actions taken while in power resonating like a sonic boom in hindsight. 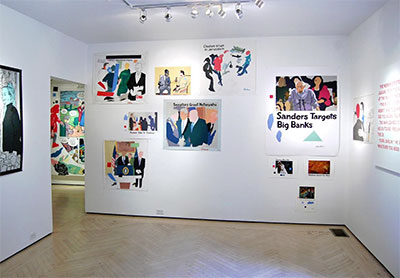 This conceptual power is maintained in the freshness of Blackburn’s saturated palette.  He flattens or illuminates characters in a painting for formal and conceptual effect, as in 2003’s Luncheon on the Grass, which is a direct reference to Seurat’s pointillist masterpiece (he’s even included one of Seurat’s birds flying across the canvas); color, free from it’s natural optical constraints, becomes a drama-heightening tool. Two arm-in-arm figures in No, No Word Yet get the full naphthol-bright treatment against a subdued but tilting background.

Text has a similar effect, especially in older works.  In many cases, we seem to have happened upon a segment of an unfulfilled narrative, a moment in which events might take us to any possible conclusion, down dark and unknown paths.  And yet, the paintings from the 1990’s and early oughts are painstakingly resolved.  It’s as though, in giving us only one frame of a story, Blackburn felt the need to fully render the frame, tack an unfinished story to reality with every square centimeter of black-contour.

But this tendency seems to fall away in the newest works, which are smaller and less-resolved, but certainly no less intriguing. Blackburn riffs on news media images of President Obama and democratic candidates Bernie Sanders and Hillary Clinton. One painting reads as an un-filled-in coloring book, another of Sanders is a dissolving series of soft smudges. Above all, Blackburn’s latest works serve as a reminder that political theater is a relatively small slice of modern life that has outsized implications. Today’s photo-ops and news stories are, in these paintings, the unintelligible forebodings of an uncertain future.  This seems to be the wisdom of a seasoned painter, an earned minimalism that coincides with life’s wryest lesson: the more you learn about the world, the less you realize you actually know.