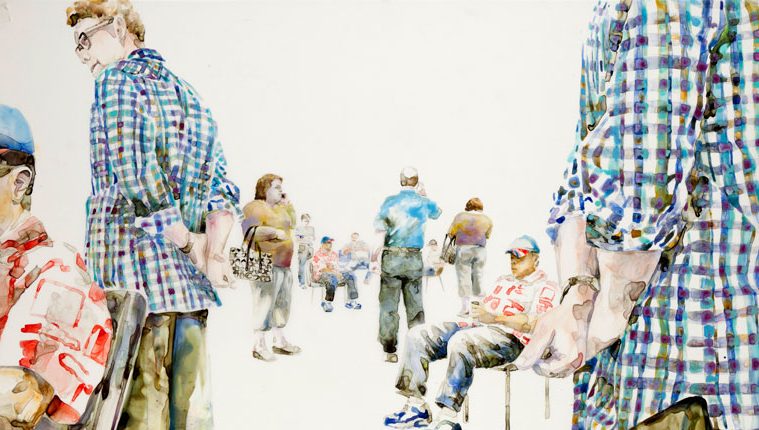 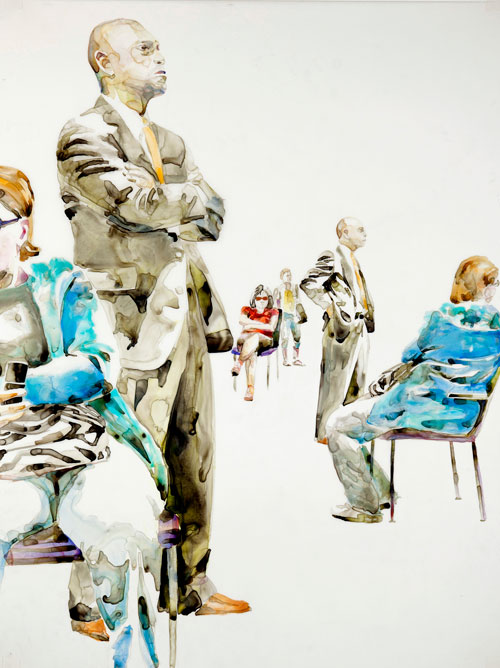 Waiting is an action defined by stagnation, tedium, and boredom – and it is something to which we can all relate. But for Houston artist Lillian Warren, who turns the potentially mind-numbing experience into a creative game, waiting can actually be productive.

“One day I was in an airport, waiting for a delayed flight…” says Warren, reflecting on the motivation behind her most recent paintings.

But wait – what’s so inspiring about the airport?

“I was struck by all the people around me, ignoring me, ignoring each other, each wrapped in a cocoon of isolation,” says Warren.

As she watched people try to pass the time by fiddling with their smart phones and other electronic gadgets, she found herself entertained by a type of waiting that effectively “crowds out” any meaningful introspection or interaction with the outside world. She realized that by checking out while hanging out, we may not even recognize what it is we are waiting for, if and when we see it.

Warren uses this subtle irony as fodder for what she calls “waitscapes,” her newest series of large scale, life size paintings on view in July and August at Anya Tish Gallery. The exhibition, Alone Together, features scenes of carefully constructed groupings of isolated people.

Tinkering with an electronic gadget of her own while waiting, Warren uses a digital camera to capture moments of inspiration whenever and wherever she finds herself waiting among a group of people – at the doctor’s office, at the department of motor vehicles and, of course, at the airport.

Once she is back in her studio, Warren digitally edits out physical background and atmospheric elements in order to visually isolate each figure. She then collages the figures into compositional studies for her paintings that she makes on Mylar which has a surface she adores. She says the fun part of the game begins with the wet paint that, when dry, illustrates a frozen moment of inherent action.

“I use fluid acrylics which pool and run and have a mind of their own on the Mylar. The challenge is to give the paint enough freedom to do interesting things, while still coaxing it to do what I want,” she says. What she wants it to do is depict a disembodied state of human existence inseparable from the passage of time, instead of documenting a “real” event.

And she succeeds. She creates a broken-mirror effect by repeating one or more figures in different poses within the same composition, a tactic that folds perspective in on itself and disrupts any assumed time continuum. Warren also renders the figures beautifully, although not completely. For example, she leaves areas of clothes and skin unpainted so as to left the white of the Mylar show through. The result is a lack of separation between the figure and the ground’s enveloping void.

Arriving late on the scene, we as viewers are uncertain whether this high contrast of white and color is due to the camera flash, the sun shining through the airport windows, or Warren’s own teasing of time and space within the process of painting. 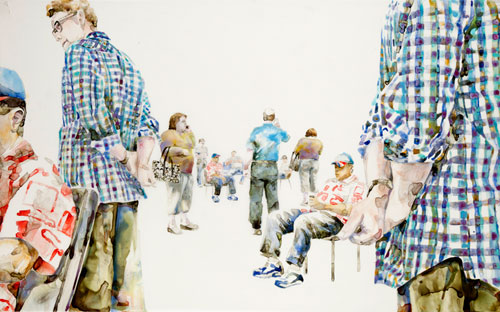 The compositions illustrate the observation process – the figures stand or sit with their backs to Warren as the casual photographer and, eventually, to us, the curious viewers. For those figures who do face forward, their eyes are fixed and glazed, only mildly engaged with whatever gadget or off-stage element is holding their attention. The magic happens when we realize that our viewing experience of these paintings is not unlike Warren’s initial experience of looking, and waiting.

Earlier this year, Warren presented a series of similar figure studies for her solo exhibition at Lawndale Art Center.

“Some of the formal changes since the Lawndale show are the aggressive cropping of figures at the edges, which I’ve done to reinforce the impression of a crowd that goes on without end, and to reflect a haphazard awareness,” she says.

Whether it is a mass of people, buildings, or cars, Warren is interested in that feeling of being alone in a crowd and the anticipation that comes with waiting for something to happen. For several years, she has been painting “empty” but emotional, highly-charged scenes of daily life.

“I had been working with the people-less landscape for quite a while because it spoke to me of the uncomfortable transitory spaces in our lives,” she says. “I realized this was a different manifestation of the same theme. The progression from landscape to trafficscapes to waitscapes seemed logical.”

So, just what is she waiting for?