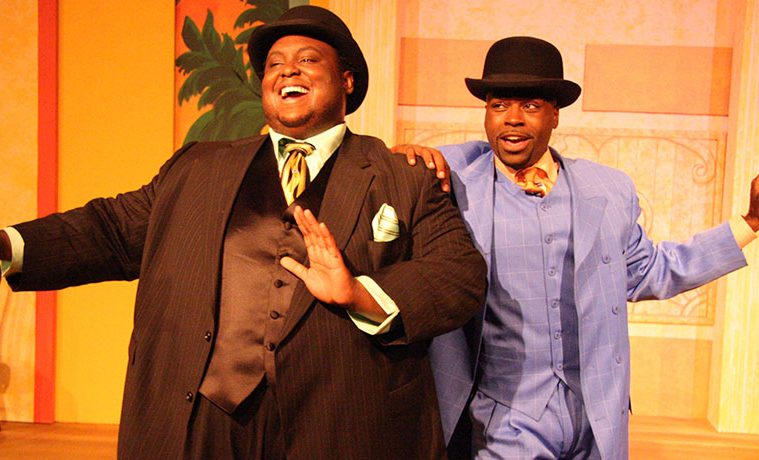 “Let me tell you a little story about August Wilson,” says Tre Garrett, Artistic Director of Fort Worth’s Jubilee Theatre, with a smile on his face I can hear through the phone. At the time of our conversation, in February, Garrett was spending the month at Texas A&M-Prairie View where he directed Wilson’s The Piano Lesson. Since taking his post at in Jubilee in 2010, this kind of community outreach has become one of his priorities.

“I try not to turn down the opportunity to educate students and audiences on the importance of Wilson’s work,” Garrett says. “I was lucky enough to to be inspired by him personally.” 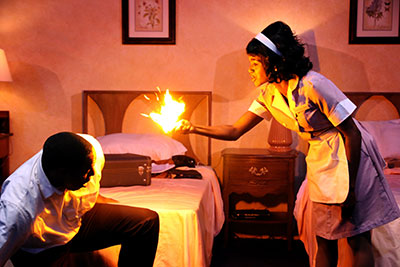 From The Mountaintop, written by Katori Hall.

When Garrett arrived at Jubilee Theatre, the company was in debt, lacked a diverse audience base and wasn’t reaching its potential in terms of the quality of work onstage. The company desperately needed a fresh perspective, and an artistic director with big ideas—which is exactly what they found in Garrett.

At the ripe age of 32, it’s safe to say that Garrett fast-tracked his career. Out of college, he was appointed Director-in-Residence at the John F. Kennedy Center for the Performing Arts, as well as an Allen Lee Hughes fellow with Arena Stage in D.C. He assistant directed Daniel Sullivan’s revival of Julius Caesar on Broadway. Before arriving at Jubilee, he was directing for Walt Disney Entertainment. When he arrived at Jubilee Theatre, not yet 30, he had lofty visions.

“My number one goal was national exposure,” Garrett says. “I wanted to develop relationships around the country, as well as here in Dallas, taking the name of Jubilee with me wherever I go. And I wanted to push the boundaries of what a small, professional theater can do.”

Since taking the reins, he’s pulled the company out of debt, grown the audience by 38%, and grabbed its first National Endowment for the Arts grant, which the company used to develop Black Spurs, a musical about black cowboys. Garrett has also struck up relationships with area theater companies, directing A Raisin in the Sun at Dallas Theater Center. He will collaborate with Second Thought Theatre on a project planned for next year’s season (announcement pending). For Garrett, the company’s regional premiere of Katori Hall’s The Mountaintop spoke volumes to the progress he’s made in his few short years at Jubilee.

“That show goes to the big theaters, the Alleys, the DTCs,” Garrett says. “But we did it at Jubilee, which is exciting for me. Because if it’s buzzing in New York City, L.A., and D.C., I want it to be buzzing in Dallas and Fort Worth. I want to be a part of that conversation so that we’ll be able to look back and say that were part of what was happening in the moment.” 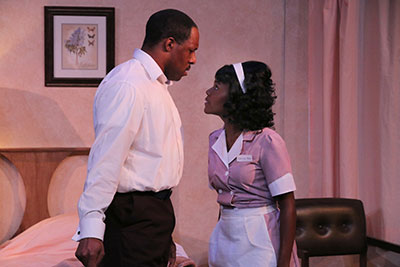 From The Mountaintop, written by Katori Hall.

In each season, Garrett programs new works, alongside the classics. The Mountaintop, which closes on March 3, will be followed by Ain’t Misbehavin’, March 21- April 20, the musical about the advent of swing music and the Harlem Renaissance. For Garrett, it’s about acknowledging the theater as the area’s professional African-American company, but also about expanding and diversifying the audience.

“Jubilee’s mission is to present the works of the African-American experience, but I think it is meant to do that for all audiences,” Garrett says. “That is what will bring us closer and closer to a shared understanding and to encourage tolerance.”

He refers to W. E. B. Dubois to make his point: “The world brightens as it darkens.” And Garrett must be on to something, because at opening night of The Mountaintop the audience was three-fourths white and Hispanic—a rare statistic for an African-American theater. “These stories bring us closer together,” Garrett says. “It’s not about black or white, it’s about shared experiences, like family and heartbreak.”

Oh, back to the story about August Wilson.

When Garrett was in high school, he stormed out of an acting class because he felt out of his element while working on a monologue from The Tempest. He ran to the library where he searched for a Miles Davis album to carry his blues away. Instead, he found himself listening to Ma Rainey’s Black Bottom, lying on the floor of a back room in the library.

“I thought it was going to be a jazz album,” Garrett laughs. “But I lay  there with my eyes shut and heard voices that sounded like people I knew, and it wasn’t something to be laughed at or ashamed of. I thought, ‘Man, I want to be a part of that.’ I started writing [Wilson] letters in the 10th grade.”

In spite of his persistence, he never heard back from Wilson until he was assistant directing Ma Rainey at a theater in Pittsburgh. Wilson walked into the theater. “I said, ‘Mr. Wilson,’ with tears in my eyes. ‘I’m Tre Garrett.’ And he said, ‘Tre, I got all of your letters.’ ”

Don’t miss this season’s production of Ma Rainey’s Black Bottom at Jubilee Theatre in May 9-June 8.