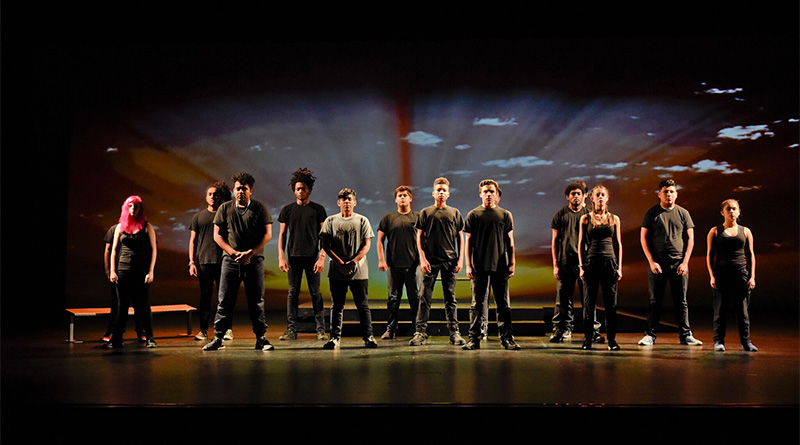 Cast of The (out)Siders Project.
Photo by Karen Almond.

Mara Richards Bim returned to Dallas in 2012, itching for a new opportunity. An Irving native, Bim’s education trajectory took her first to New York University’s Tisch School of the Arts, then to Second City, then back to NYU for a master’s degree in Performance Studies. When she landed back in Texas, she wanted to offer young people something she felt her adolescence had lacked: Edgy, raw theater making.  And thus, Cry Havoc Theater Company was born.

In 2014, the company performed its first piece, The [Out]siders Project. With the guidance of local playwright Shelby Allison Hibbs, students from Dallas high schools wove together their own stories, alongside the story from S.E. Hinton’s novel about two teenage gangs. Since then, the group has performed at the Festival of Independent Theatres and in January, they open a show based on the aftermath of the police shootings in Dallas this summer. Lauren Smart chatted with Bim about working with teenagers, her theatrical model and what’s next.

In many of your projects at Cry Havoc, you rely on the teenagers you work with to develop their personal stories into theater, have you found this comes natural to them?

Part of the reason I created Cry Havoc was so that teenagers would have a voice in the issues that affect their lives. In giving them creative space to express themselves freely, yes, their personal stories and the development of those stories have come naturally. Some are better writers than others, but all welcome being asked how they feel about and see the world. In pieces where we’re devising rather than relying on an existing script, we spend time experimenting, writing and editing. Sometimes, one character’s monologue the audience hears in the final product is a compilation of what several teens have written. Just like anything in life, the more we work with them in this way, the better their writing becomes and the easier it is for them to go out on a limb and experiment in the creation of new work.

What do you think are the common misperceptions about teenagers, specifically as it relates to their seriousness?

Teens occupy a strange space in our society; they aren’t really children and they aren’t quite adults yet. They constantly receive mixed messages from adults as to who they are, what’s expected of them and what they’re capable of. Unfortunately, more often than not, the messages they hear are negative rather than positive. I’ve been shocked at times when they’ve told me some of the things adults in positions of authority have said to them.

Teens are intuitive. They have spent years watching adults navigate the world in good ways and bad. They see the problems facing our society and know that they’re inheriting those problems. Especially now as we see the chaos gripping our country and the outcome of the election, they are terrified by what they see and want to be part of the conversation. Yet, very few adults ask how they feel about all of this. We were in rehearsals this summer for Naomi Iizuka’s Good Kids when the Dallas police shootings happened. The next day, we took time at the end of rehearsals for them to share how they feel about the racial tension in our country and the police shootings. There were tears and anger. One said, “the adults are f-ing everything up for us.” I can’t disagree with them. I wish more adults would take the time to talk with teens about how they are experiencing the world we’re living in.

Did you have experiences as a teenager that made you want to establish Cry Havoc?

I had what was at times a tumultuous childhood. I didn’t feel physically and emotionally safe and I certainly didn’t have a voice in the conservative, Christian community I was surrounded by. That, in turn, made me rebel and lash out in all the unhealthy ways you can imagine. At the same time, I got involved in theater in middle school and continued that through high school. It was my saving grace and gave me a glimpse of something else. I enjoyed pretending to be someone other than myself. But the material we performed was typical of many schools in the Bible belt and didn’t speak to the world we actually lived in.

After high school, I got accepted into NYU for theatre and when I got there, I was thrown in with young people from across the U.S. Many of them, by virtue of growing up in different parts of the country, had performed far more exciting and risky plays in high school—work that inspired them and gave them tools to navigate adulthood better. From that point on, I became interested in what theater with young people was actually capable of both socially and artistically.

Your upcoming project examines the Dallas community in the aftermath of the July police shootings. What is the process for taking interviews with police and community members and turning them into a story?

We started rehearsals on Nov. 20th and our first interviews are in early December. Ruben Carrazana and I are co-directing and we’re following, to a large degree, the model used by Tectonic Theater Project in their creation of The Laramie Project some years ago. We’ve reached out to police, community organizers, protesters, and community members and are inviting them in to be interviewed by the teens. Ruben and I will work with the teens beforehand to come up with the kinds of questions we want to ask of each person.

We’re specifically looking at how these folks experienced race relations here both before and after the shootings and, in some cases, how the shootings directly impacted their lived experience. The teens will also keep journals throughout the process and we’ll give them writing prompts along the way so that we capture how they experience the dialogue on race and how listening to these folks impacted by the shooting affects the teens’ perceptions. We’ll audio-record the interviews with the community and then, with the teens’ input, we’ll weave together the interviews and the teens’ owns words of reflection to create the script. For the final performance, the teens will play both themselves as observers as well as the various people from the community.

Professional directors and designers work alongside the young actors for your productions, do they play an instructional role or have you found the creative exchange goes both ways?

It is a bit of both. The directors definitely play an instructional role and because of that, we choose directors who have had previous experience in some capacity working with teens. We also bring in acting coaches and choreographers who may or may not have had previous experience with teens, but whose roles are both to get professional-quality performances out of them as well as to teach along the way. If you asked the directors, coaches and choreographers, they’d tell you that the creative exchange goes both ways, too. Their work has been impacted by working alongside these young, creative, talented people. All of the professionals we hire care deeply about young people, their futures and how they will impact our future in years to come.