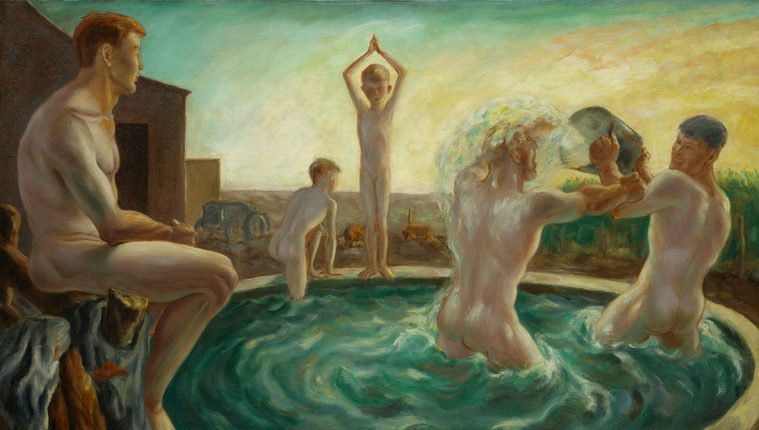 Those Were the Days

Few moments in American cultural history are as readily recognized as the “roaring” twenties — their mere mention conjures dynamic images of flappers, Fords, and skyscraper cities. And yet, American artists responded to this dizzying new modern world with art that evoked stillness, clarity, and order.

“Youth and Beauty: Art of the American Twenties” is the first wide-ranging exploration of American art from the decade whose beginning and end were marked by the aftermath of World War I and the onset of the Great Depression. The exhibition, declared “expansive and exhilarating” by the New York Times, includes over 130 paintings, sculptures, and photographs by over sixty artists and is on view at the Dallas Museum of Art through May 27. Organized by the Brooklyn Museum, “Youth and Beauty” also includes three works from the DMA’s collection by artists Edward Hopper, Yasuo Kuniyoshi, and Gerald Murphy.

“‘Youth and Beauty: Art of the American Twenties’ offers us a window into the conflicting forces at work during this complex decade, and how the response of the nation’s artists to those challenges transformed the face of American art,” said Maxwell L. Anderson, The Eugene McDermott Director of the Dallas Museum of Art.

The works on view, all dating from 1920 to 1929, represent the efforts of sixty-seven painters, sculptors, and photographers to express their individual responses to the cultural upheaval that occurred in the interval framed by the aftermath of the Great War and the onset of the Great Depression. Confronted with a population and an environment that was newly, and permanently, altered by a sweeping wave of mechanization and urbanization, artists coined a lean modern realism to process an overwhelming barrage of stimuli and to create something authentic and grounded. Though long perceived as entirely conventional, this new brand of realism is tellingly inscribed with the dislocations and adaptive struggles of the individual in a profoundly changed world.

One quickly comes to recognize works of American art created during the decade of the 20s. They are objects in which opposites appear to meet and recombine: formal perfection with blunt immediacy; visual clarity with an erasure of detail.

The thorough integration of painting, sculpture, and photography throughout the exhibition, and the critical attention devoted to a broad array of artists, from such leading figures as Georgia O’Keeffe, Thomas Hart Benton, Alfred Stieglitz, Charles Sheeler, Imogen Cunningham, and Man Ray, to lesser-known artists including Margrethe Mather, George Ault, Aaron Douglas, Elsie Driggs, and Peter Blume, will illuminate common themes and shared characteristics. Works of art in the DMA’s collection featured in “Youth and Beauty” include “Lighthouse Hill” by Edward Hopper, “Bather with Cigarette” by Yasuo Kuniyoshi, and “Razor” by Gerald Murphy.

Visitors will be able to explore the exhibition with a smARTphone tour featuring eighteen works and an introduction from DMA Director Maxwell L. Anderson. The Museum will celebrate “Youth and Beauty: Art of the American Twenties” during the April 20 and May 18 Late Nights with 20s-influenced concerts, films, tours, family activities, and more. A weekend of events inspired by the exhibition will be held on Saturday, April 28, and Sunday, April 29, featuring a Silent Movie Marathon and half-price exhibition admission on Saturday, April 28. Additional programs, including lectures and gallery talks, will be scheduled throughout the run of the exhibition. For dates and details, visit DallasMuseumofArt.org.

Accompanying “Youth and Beauty” is an exhibition featuring images of Texas during the 1920s made by Texas artists. Gathering drawings, etchings, prints, and photographs loaned by local collections “Texas in the Twenties: Prints, Drawings, and Photographs from Lone Star Collections” highlights scenes of Texas as well as the transitional time in Dallas history when it was on the verge of becoming one of our nation’s largest and most vibrant cities. Showcasing approximately thirty works by L. O. Griffith, Mary Anita Bonner, and Eugene Omar Goldbeck, “Texas in the Twenties” will be on view March 4 through July 1, 2012.