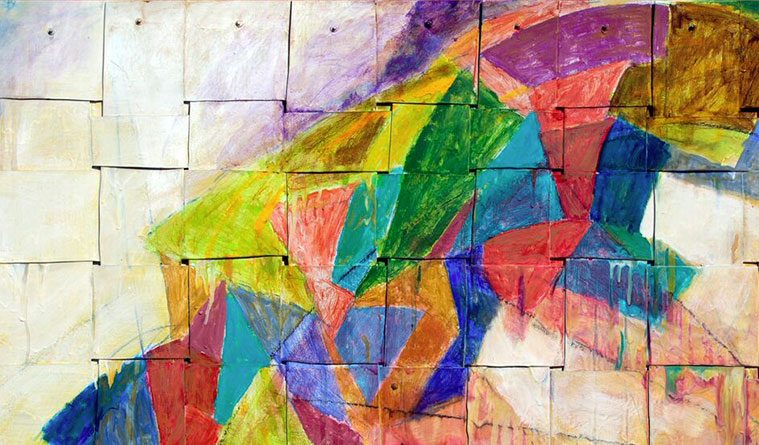 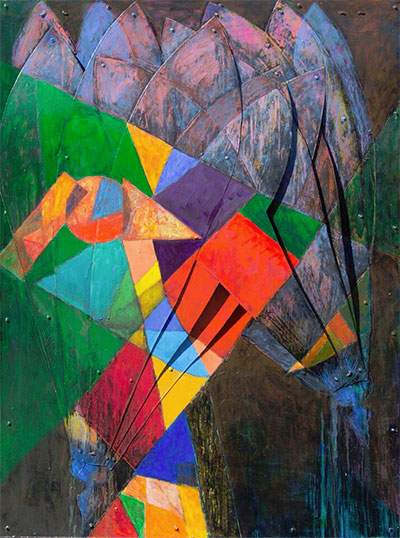 After a two-year hiatus, Tom Holland has returned to Texas for his second solo exhibition at Samuel Lynne Galleries, on view through June 29. Currently residing in California, Holland has enjoyed a successful career spanning roughly six decades and numerous awards including an NEA Grant, Guggenheim Fellowship, and a Fulbright.

Holland studied under David Park while at the University of California, Berkeley, a leading figure in the Bay Area Figurative School, but it was while teaching at UCLA in the late 1960’s, that Holland broke away from traditional oil on canvas and started experimenting with epoxy paint – commonly found on boats, planes, and industrial applications due to its durability and high levels of fire and water resistance – onfiberglass and aluminum. The experimentation brought Holland a great deal of acclaim and determined the trajectory of his career.

As Holland told me while we were slowly walking around the exhibition space, he doesn’t plan his works, nor does he utilize studio assistants. As such, each piece of art serves as a peek into his personal, ever-evolving method of production.

Holland has a tendency to dissolve the distinction between painting and sculpture; much of his work contains characteristics of both art-making methods. He borrows the forms of painting and sculpture, and creates an explicit relationship between the wall installations and “free-standing paintings” – as he identifies them – achieved through an interplay of common materials, rigid shapes, and radiant color, arguably a result of an arthistorically conscious Holland contributing to the popular shift in the 60’s of eschewing frames and traditional canvases.

In Tom Holland: Now…and a little bit of history, recent work is displayed next to work dating from nearly fifty years ago. Everything is more or less on view in a single room of Samuel Lynne’s space, with the intent of “creating a comprehensive view of his artistic maturity,” a decision which threatens to dismantle the harmony of the works on display; it requires careful planning to avoid the feeling that the works are scattershot, something which certainly sabotages the aim of this particular exhibition. 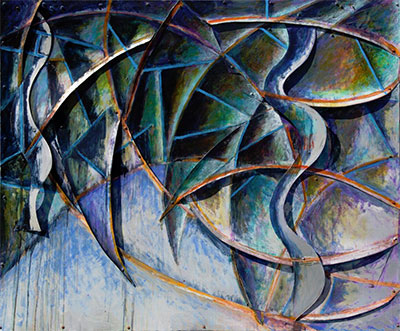 The precise placement of works in the exhibition creates a dialogue between older and newer objects.  For instance, Pope Creek #19, 2014, is flanked by Berkeley Series, 1971, and Ponce, c. 1978.  All three are epoxy on aluminum, with visible rivets and a reflective, luminous effect as a result of the epoxy paint applied to the metal surface. Pope Creek #19, however, suggests a stylistic shift emphasizing the illusion of depth through pronounced, layered geometric shapes, while the two earlier works are characterized bypainted, metal strips cutting through the composition on a solid background, rarely reaching the edge of the aluminum.Through this comparison, and other fairly subtle, but observable alterations in subject matter, the exhibition succeeds in highlighting some progressions Holland has made during his lengthy career.

Much of Holland’s art recalls the strong colors and abstract, geometric shapes of Robert Delaunay, a name that’s virtually synonymous with Orphism, an early 20th century, French movement that blended elements of Analytical Cubism and Fauvism. Fox Tail, one of Holland’s large, free-standing paintings, feels like an opportunity to experience a section of a Delaunay painting in the round.

Holland clearly emphasizes color in his wall installations and free-standing paintings. As he has stated, “the epoxy color application is what truly defines each one,” making the role that color plays in his work similar to that of John Chamberlain.Although Holland’s forms are much more controlled due to radically different methods of construction, both artists share a reliance on paint to transform collections of metal into visually engaging works of art.

Holland has exhibited extensively throughout the country, most notably in California and New York, but has made limited appearances in Texas. Tom Holland: Now…and a little bit of history serves as a reintroduction of an importantcontemporary artist to a Texas audience that may not be familiar with his work, and makes a strong case for his inclusion in a larger conversation about 20th century American art.