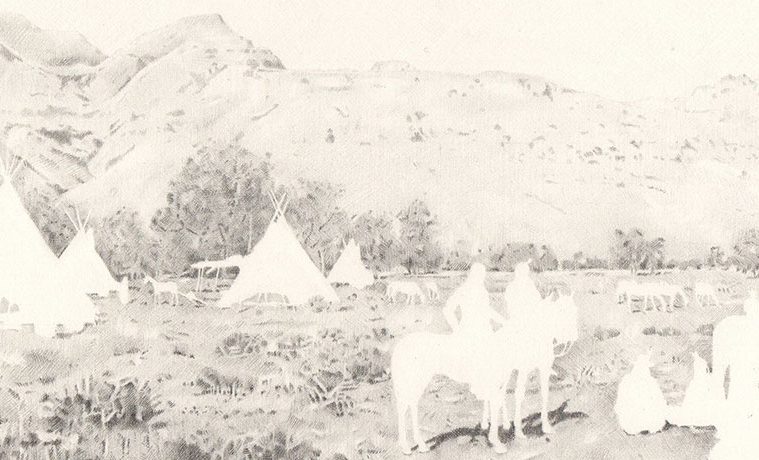 IMAGE ABOVE: Tom Molloy. Native, Council of the Chiefs, 2013. Graphite on paper. Courtesy of the artist and Lora Reynolds Gallery.

Comprised of delicate graphite drawings, photographs and one sculpture, Tom Molloy’s NATIVE—his fifth solo exhibition to date at Lora Reynolds Gallery—represents the artist’s inquiry into the American historical experience, as refracted through the lenses of colonialism and imperialism. 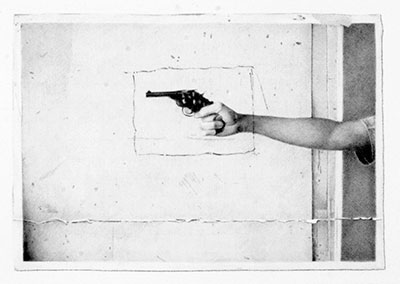 The presentation opens with a drawing entitled Gun that hangs just outside of the main gallery. Molloy created his drawing from the source photograph that Latvian-born artist Vija Celmins used for her painting Gun with Hand #1 (1964), which emerged in the wake of images depicting Vietnam War violence. By referring to Celmins—who claimed representational neutrality for her image—Molloy declares the tone of his own artistic vision.

Entering the gallery itself, the viewer immediately sees Edge, a rectangular pedestal partially covered by a Spanish-language Mercator map. Europe sits on top of the pedestal, with the rest of the world draped on one side—folded along the Atlantic Ocean. The references to the 15th century “flat earth” view of the world and the voyages of discovery that led to European colonization of the Americas are clear.

Molloy pays homage to another artist, the nineteenth century Franco-American painter Henry Farny, in nine drawings of Native Americans that hang in the front half of the main gallery. Where Farny sought to celebrate images of Native American life, Molloy calls attention to the fact of ethnic genocide. He does this by figuring Native Americans and everything associated with them as empty silhouettes or “vanished” Americans.

The back half of the main gallery contains two sets of photographic images. One, entitled Citizen, depicts the artist wearing paper masks representing the faces of four American-born men of Middle Eastern descent killed in US drone attacks. Molloy conveys the horrifically unjust nature of their demise—at the hands of their own government—by picturing each man as happily engaged in ordinary day-to-day activities.

The second set of images, entitled Base, is composed of approximately 600 small aerial photos of American military bases that Molloy found online and reassembled into landmass groupings meant to suggest a world map. The United States, heir to the European imperialist project hinted at in Edge, is most prominent.

The final component of Molloy’s exhibition, Postcard, hangs in the LRG project room. These 12 images, which depict the backs of unsent World Trade Center postcards, leave out key components—in this case, the Twin Towers. Together, they read like artifacts of a more secure time in American history, a time before the traumas of 9/11 and the dangerous racial prejudice (recalled in Citizen) to which that event gave rise.

As objective as Molloy is, he does not leave himself out of the quietly powerful statement he makes about man’s inhumanity to man. Everyone—including an artist from Ireland—is implicated in the ongoing international struggle for power and dominance. All people everywhere share an equal responsibility to humankind to learn to live in peace.