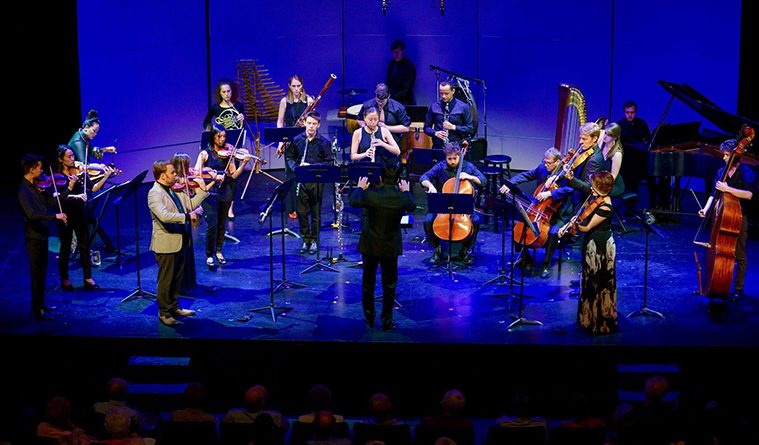 Apollo Chamber Players with members of KINETIC, Loop38, and WindSync as part of Phoenix Ascending, May 19 at the MATCH.
Photos by Ben Doyle. 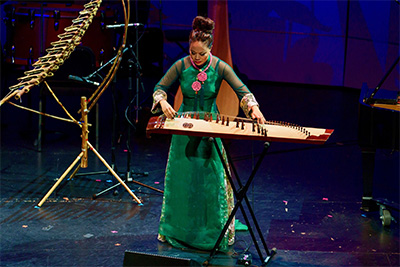 Apollo Chamber Players celebrated the conclusion of its 10th Anniversary Season with a multilayered program (Phoenix Ascending) inspired by the unique sounds, traditions, and experiences of Vietnam. The concert Saturday night (May 19) at the MATCH pulled together many seemingly disparate strands to give the audience a rich musical experience of a country that merely a generation ago we knew mostly through the lens of a horrific war.  The performance featured works by three contemporary composers, the world premiere of Apollo’s 14th 20×2020 commission, the preeminent đàn bầu player Vanessa Võ, and the largest Apollo collaboration to date, involving musicians from WindSync, KINETIC, and Loop38. The content and context of the program reflected the complexity of the past and set out to connect the two cultures through music in the present.

Apollo performed two string quartets by Vietnam War veteran turned composer Kimo Williams on the first half of the program. Both Into the Liquid (2012) and Quartet for Sons of Nam (1990) are autobiographical works, a montage of images and impressions from the composer’s life.

The heart of Into the Liquid is the bittersweet “Veteran’s Lament,” the plaintive melody that weaves through the hymn-like final section, reflecting both the deep sadness of loss and a sense of hope for those who came home. The Apollo players rendered the lament beautifully with their sensitive phrasing, warm tone, and fine-tuned balance.

Rock, jazz, and American folk idioms play heavily in Quartet for the Sons of Nam, perhaps mirroring the coming together of young men from all over the country to go to war. Williams’s first musical hero was Jimi Hendrix. From rock beats played with emphatic punctuation by cellist Matt Dudzik, to the syncopated rhythmic variations, to the solo riffs accompanied by the sound effects of slapping the wood of the instrument, the piece is chock-full of interesting melodic and rhythmic ideas, effective transitions, and unrelenting forward movement. Amidst the buzz of activity, time for reflection came in the heartrending solo passage offered so poignantly by violinist Anabel Ramirez as a “Silent Prayer,” the emotional center of this outwardly exuberant work. 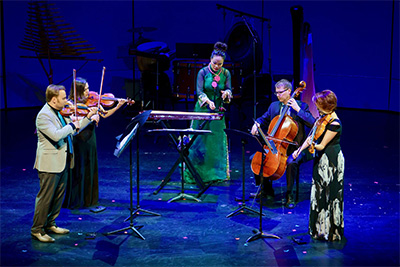 The second half of the concert not only aligned with Apollo’s mission to explore the cultural and folkloric influences in classical music, but also acknowledged the power of music to tell meaningful stories and connect on a very human level. The fascinating back story of how this project came together is an essential part of understanding the context of the music heard.

Alexandra du Bois, a New York City based composer known for her works addressing humanitarian issues, was an early Apollo collaborator in its 20×2020 commissioning project. She met Hanoi-based Vietnamese composer Vũ Nhât Tân in 2010 at the Ascending Dragon Festival, the largest cultural exchange between the two countries since the war, supported by the US State Department. Her piece Within Earth, Wood Grows, for chamber orchestra and đàn bầu, was premiered in Hanoi with an equal number of musicians from both countries. Apollo’s 14th 20×2020 commission features Vũ Nhât Tân’s Mây (Cloud) for đàn bầu and string quartet. The two composers reunited in Houston last week, and both were in the audience Saturday evening. The đàn bầu player Apollo brought to Houston is a superstar in her own right. Vanessa Võ is an Emmy-winning and Grammy-nominated composer and multi-instrumentalist on Vietnamese traditional instruments. She is also featured on the soundtrack of the PBS Burns/Novick Vietnam War series.

When the curtain opened after intermission, the audience was greeted by a trio of traditional Vietnamese instruments, the one stringed đàn bầu, the Vietnamese zither đàn tranh, and the bamboo xylophone, shaped like the houses in the South Highlands of Vietnam. Võ, elegant and poised in a beautiful traditional Vietnamese dress, gave an impromptu demonstration/performance on the instruments, interspersed by moving stories and memories of Vietnam and its people. There were a few surprises, showing that an instrument originating in the 9th century can be equally at ease playing ancient folk melodies, a wistful rendition of “Summertime,” or rocking Jimi Hendrix’s “Purple Haze.” It might seem odd, but whatever Võ plays, she communicates the emotion in the music directly to the audience. She is a powerhouse of free expression.

In Mây, Tân faced a big challenge in writing for the combination of string quartet and đàn bầu. The unique timbre of the melodic instrument (think theremin), along with its own specialized technique of sounding harmonics in the right hand and the wide-ranging bending of tones with the left hand rod, does not blend easily with the traditional sound of a string quartet. Attempts at imitating each other’s characteristic sounds were made throughout the work, but the most successful episodes took advantage of the subtle color variations and bending ability of the đàn bầu. The multi-sectioned work is inspired by the busy sights and sounds of Hanoi, seen from the moving clouds, and different aspects of Vietnamese traditional music. The opening motif, a simple pentatonic melody from a Vietnamese folk song, is layered in harmonically interesting ways. Tân uses extended techniques to great effect to evoke the distinct yet varied sound palette of rain in Vietnam—plucking close to the bridge, over the fingerboard pizzicato for extra resonance, col legno, and lightly pinging the bow on the string. In another episode, we are treated to a sound memory of Ca trù, an ancient chamber music tradition involving sung poetry. Here Võ’s đàn bầu is the soulful, poetic singer, and the quartet acts as the praise drum, marking the phrases and commenting on her performance with the rhythmic slapping of the back of the instruments. There were moments when I was completely lost in the thickness of the intermingling lines. Like the traffic in Hanoi, where buses, motorbikes, cars, bicycles and people fight for their own space, the cacophony in the streets is reflected in the music. Lines overlap, intertwine, and go their own way, yet everything continues to move and flow. The ensemble created a wonderfully complex sound world, bringing Tân’s notes to life vividly.

The evening culminated in Alexandra du Bois’s large scale work for chamber orchestra and đàn bầu,  Within Earth, Wood Grows. Here the đàn bầu is blended into the large ensemble, yet remains a central element in the whole. Du Bois wants the audience to feel the smoke and humidity, the scent of jasmine permeating the thick air, the density of the people living in Hanoi, the moving clouds. The music is spacious, allowing for layers of sound to develop, textures to evolve, images to shift or linger, and the mind to contemplate or wander. The orchestration is subtle and effective, especially in the varied pairings of instruments, creating wondrous tone colors. In its 2010 premiere, these pairings represented the US and Vietnam, as musicians from the two countries were paired together as friends. Conductor Jerry Hou skillfully brought out the rich textural beauty of the work with a fine ear for balance. The ensemble, comprising some of Houston’s best musicians, seemed wholly connected to the music.

Apollo Chamber Players continues to grow through its focus on music of diverse folkloric influences. The content of its programming is rich and layered, and the connections it forges in the community and across the world through music are invaluable. Some may have found the program a bit on the long side and the content too much to absorb in one concert. But sometimes there are so many distinct voices and so many inspiring stories, we have to hear them all.