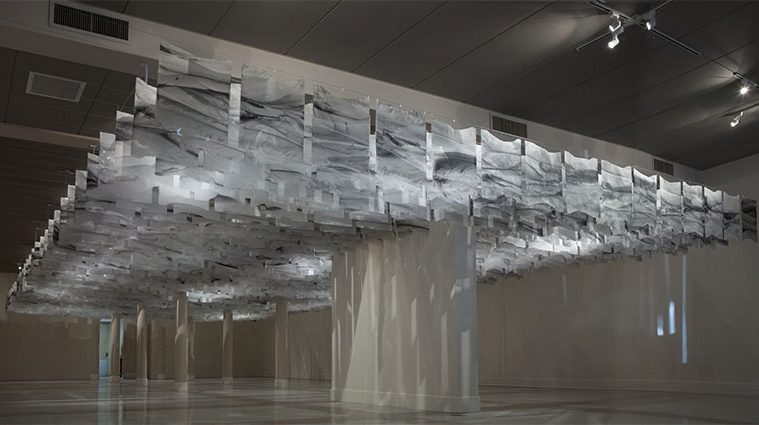 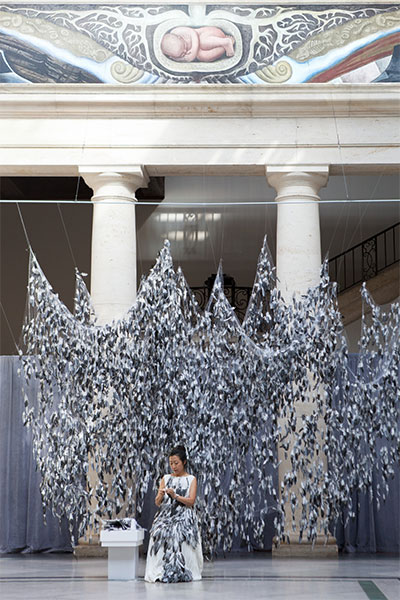 In her installation for the exhibition Tensile Strength at SITE Gallery Houston, Austin-based artist Beili Liu wanted to think about the silo as both a physical space and a metaphor for division. Lian, an installation of white threads strung from the ceiling and a line of granular salt on the floor, is about connection: both the string and the salt draw two silos together. “I wanted to think about the silo mentality,” she says, “both in our personal lives and in the political context. Working against that symbol, I connect the two silos with thread.”

Much of Liu’s recent work uses the act of sewing to think about hopefulness and healing in a world marked by chaos and fear. In After All / Mending the Sky, for example, Liu cites the ancient Chinese fable of Nüwa, goddess and creator of humankind. “The installation draws a parallel between the goddess’s heroic effort and actions and the humble, domestic, women’s tasks of sewing,” Liu writes. The piece consists of nine suspended silk forms, imprinted with cyanotype. The cloud-like shapes hover above the viewer, white threads trailing down from them. At the end of each thread, Liu has tied a sewing needle.
Liu notes that she wasn’t trained as a fiber artist (indeed, she started her career studying graphic design before realizing she wanted to work with spaces). Liu grew up in a village in China, observing her mother’s sewing labor as work that held together the household. “I am looking at [sewing] from its most fundamental action. Those are the memories I have about sewing,” she says. “It is not decorative—it’s this chore, and I remember watching [my mother]. Sewing comes from that, from making something useful. It’s a very basic and simple thing.”

In September, Liu performed a new work at the Detroit Institute of Art, in which she sewed feathers dipped in tar onto the simple garment she was wearing. The work, she says, is about a stain that is impossible to clean. With its reference to tarring and feathering, the piece remade the violence of that punishment into a softer, gentler reflection on guilt. Behind her, an installation of the feathers hung in gently billowing curtains beneath the Diego Rivera courtyard murals. 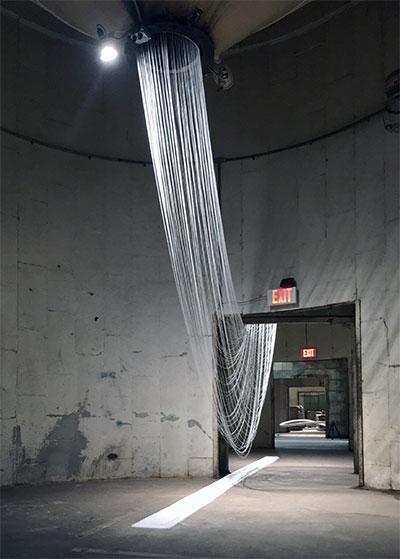 If sewing is a recurring concern, much of Liu’s recent work also looks skyward. “The hovering above idea keeps coming back to me,” Liu says. “For a while, I was working closer to the ground, and now it’s going up… We live in a time of fear and agitated energy, so how do I talk about that now? [There’s something about] looking up, seeking hope.” Liu’s 2015 installation Stratus at the Grace Museum in Abilene consists of a forest of Mylar panels dipped in layers of molten wax mixed with graphite. Arranged in rows, the sheets hang from the ceiling, leaving seven feet of space from the floor. “It’s an unusual and refreshing space, an intimate distance,” Liu says. “We’re used to having 10 feet.” The grayish cloud, then, sits just above the viewer’s head, and the repetition of the layers creates currents, deltas and rivers that flow gently in the air. Liu says she was thinking about the embodiment of loss when she made the piece, considering how that heaviness hangs as a weight.

As an artist who responds to specific spaces, Liu’s studio practice is one of experimentation for the first stage of each idea. She goes to the studio to think, to sketch, to workshop ideas. “Sometimes studio visits are really challenging for me,” she says, laughing, “Because, how do I show a piece that’s envisioned for another space?” As she drafts ideas, she begins to dialogue with the specific location for each installation. The composition of a work is determined by the space, by the height of the ceiling, the scale of the room, the traffic pattern. Sometimes she works with the energy that already exists there, and sometimes she tries to challenge or transform that energy. In a recent project at the Facebook headquarters in Austin, for example, Liu wanted to change a transient space into something that had a connection to the outdoors. “People are working there, walking through, thinking about the work they’re doing on their computers. I contradict the expectation of that space, blurring the boundaries between inside and outside,” she says.

Currently, Liu is a professor in the Department of Art and Art History at UT Austin, and has been recognized as a Regents’ Outstanding Teaching Professor for the last seven years. Last year, Liu won the prestigious Joan Mitchell Foundation Painters and Sculptors Award and she was recently named the 2018 Texas Artist in three-dimensional media. Like the poet laureate of sculpture, the award is the state’s highest recognition for excellence in the arts. “There are all these magical things that can happen,” Liu says, still registering the surprise of these two awards. “More than anything, it’s such an encouragement.” The recognition, she says, is an impetus to keep working, an affirmation of what she’s been doing.

Across her work, Liu balances scale with modest gestures. “There are these soft, persistent actions,” she says. “These have potential. I look at my practice in a broad way, [about] politics, the environment, our spiritual space, our desire for comfort, our desire for doing good.” Small actions, humble recurring practices, have the power to accumulate and effect change, she believes. “By keeping at it,” she says, “something will change.”