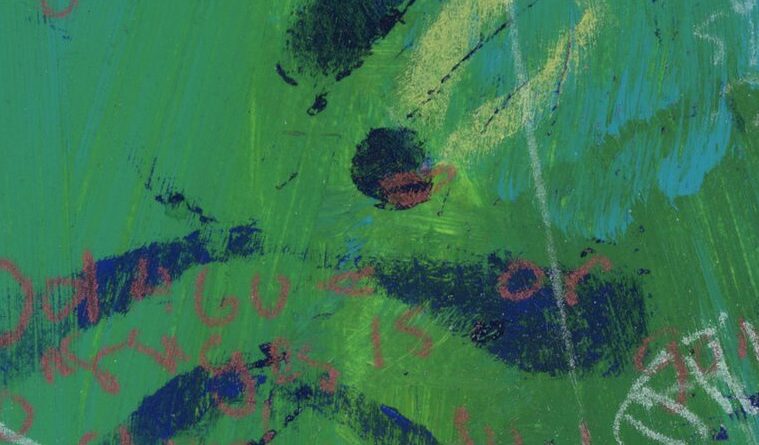 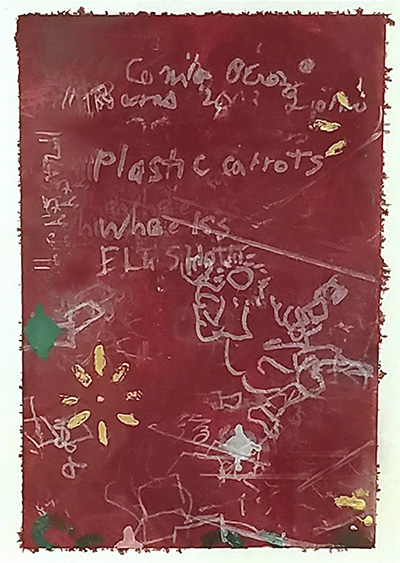 “They’re either very big or very small,” Gael Stack says as we stand before her latest set of canvases. “In my life or in my painting, I don’t do middle ground very well.” Her latest exhibition, at Dallas’s Holly Johnson Gallery, on view through May 5, is aptly titled Tinies (her works were also on view in a show of the same name at Houston’s Moody Gallery in Spring 2017). The roughly postcard-sized paintings are precious in their smallness, but they are suffused with the same easygoing elegance as their vaster cousins.

In her decades-long career as a painter, Stack has amassed a varied and unique iconography that ranges from such diverse sources as “renaissance babies” and a Japanese “hungry ghost” called a Gaki, to scraps of language and secretarial shorthand. We spoke in her studio, which is full of natural light and paintings in various stages of completion. During the course of our talk, she points out a work with text by Julian Schnabel and a papier mache chicken made by her grandchild with an equal sense of wonder. This goes a long way towards explaining exactly what keeps Stack’s paintings perennially fresh: There’s no affect to be found in how she thinks of them. They are mere moves in a sweeping repertoire: A Stackian visual language that continues to expand over time. “They’re just things that strike me as interesting,” she explains. “[It’s] what I think my brain looks like,” she says with a laugh.

The “things that strike” are what have defined Gael Stack’s career, as well as those she has a natural aversion to. “What I learned while being a secretary was that I didn’t want to be a secretary,” she says of one of her early jobs. She points to the flat filigree of shorthand in some of her paintings, one of the only relics from this era of her life, with the exception of a tiny silver shorthand dictionary she produces from one of her many bookshelves. It was in this era when “women weren’t supposed to be artists,” that Stack went to school to study art. Her own mother was a musician in a swing band in the 1940s, but by the time Stack went to school for art, female painters still weren’t taken seriously. A professor wryly informed her that she “wouldn’t be an artist but [she’d] have good taste.” 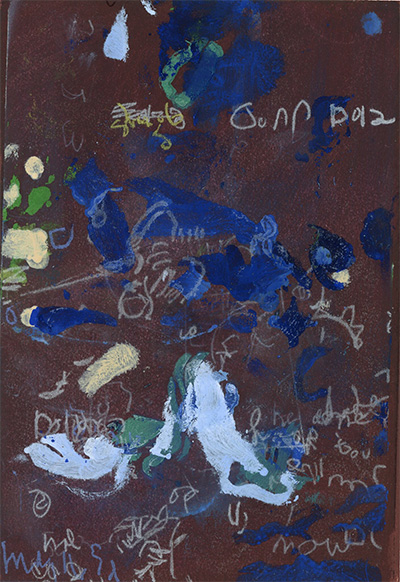 By the time she moved to Houston in the 1970s, Stack was a working artist and single mother, with three jobs to make ends meet. Eventually she landed a full-time teaching position at the University of Houston, exhibiting continuously throughout this period. It’s tempting to make the moral of this story her single-minded mission and work ethic, but she chalks it up as much to luck as any of those factors. “Things just happen accidentally,” she says, citing an visiting professorship she had at Yale in the 90s. “I’ve never said no to things. Generally if I’m invited…I do it.” She also touts the importance of paying forward the opportunities she’s been given, a sort of counter-legacy to her less-than-supportive professor in art school. At the University of Houston, Stack and her colleagues make it a point to “always try to get half women and half men” in their graduate recruiting. “I’ve always been supportive of women in the arts.”

One piece of advice that she often gives these students comes from a quote by Eudora Welty: “Greater than scene is situation. Greater than situation is implication. Greater than any of these is a single, entire human being, who will never be confined in any frame.” For Stack, “implication is the heart of all art.” Which is perhaps why it’s so easy, even though Stack doesn’t assign specific meanings to the figures in her work, to piece together the connections that one inevitably finds there. The “weird” babies of the early Renaissance—“Babies don’t look like that,” she says, a twinkle in her eye—along with the slavering and emaciated Japanese ghosts are endless wells of need at two ends of a spectrum. Suspended in Gael Stack’s deeply saturated fields of color, line and pattern, they seem to directly contrast the artist’s own philosophy of “not trying to grab everything.” “That’s the nature of some of the art world,” she says of artists whose constant churn for recognition ends up in distraction or disillusionment. According to her “the art world is big enough.”