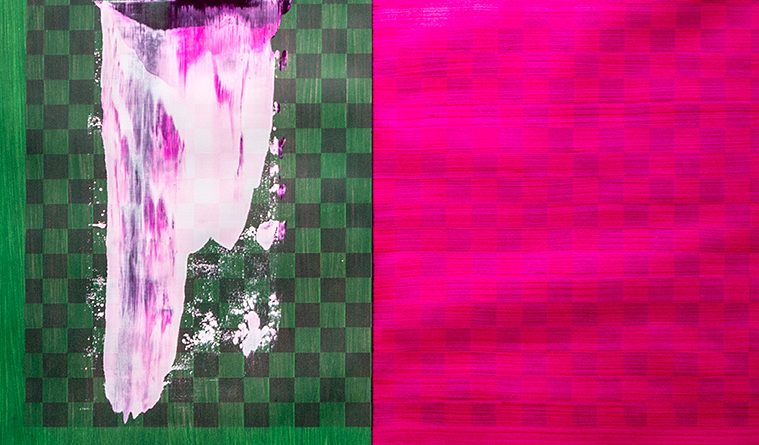 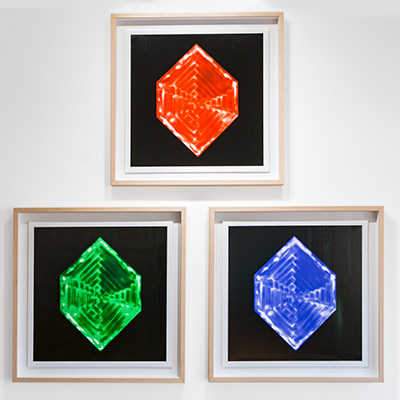 To get to Joseph Cohen’s studio, you have to walk up. He makes his paintings on the third floor of his Houston Heights living space. It’s a sliver of a building, each floor of which is punctuated by more and more windows. The light, on the gray winter morning when we speak, feels rarefied—an impression enhanced by Cohen’s beautiful paintings, which gleam impassively from the walls or peek from meticulously constructed crates around the large room.

Cohen’s paintings have always been elegant, operating in the tense territory between image and object. But beauty, although an ancillary element in the work, is not Cohen’s stated end. “What people were receiving from the work was beauty or aspects of beauty,” Cohen says of his previous series.  “I became more interested in creating something objective.” His original experiments were with “found paint and a found palette. I then developed into making my pigment with precious materials.”

Cohen refers to the gleaming surfaces of works in which he used fine materials—often gold or diamond dust. Every material was considered. However, it was an encounter with someone outside the art world that gave Cohen’s work a new focus, which has led to collaborations with medical laboratories in both New York and Houston, a Houston Arts Alliance artist grant, and a succession of exhibitions across the city.

Cohen was lecturing about his previous body of work when Dr. Heller of the Daniel Heller Lab in New York City at Memorial Sloan Kettering Cancer Center, happened to attend. Afterwards, “Dr. Heller said, ‘basically, what we are looking at is paint.’” Cohen explains, “I thought he didn’t appreciate the work. I thought I was being very meticulous.” As it turns out, Heller was indeed interested in Cohen’s process. 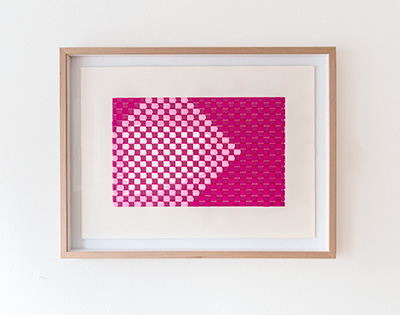 Their meeting was the germ of the artist’s latest endeavors, which begin to blur the boundaries between lab work and studio work, leading to a level of precision Cohen couldn’t have accessed on his own. “The scientific process and the artistic process are really the same.” Heller introduced Cohen to his work with “carbon nanotubes.” They’re “one atom thick. It’s carbon in tubular form. It has unique optical and physical properties.” Cohen saw the poetic potential in incorporating carbon nanotubes in his paint mixing process. “If I can make the paint at a molecular level, I can have more control.”

Cohen’s recent public art residency in the Weisman NanoEngineering laboratory of the Department of Chemistry was facilitated by Rice University’s Evan Garza. The artist’s solo exhibition Looking at a flower, is on view through April 8 at the BioScience Research Collaborative.

“I get to wear a labcoat,” Cohen laughs. “If I can use a bad analogy, it’s like the layers of an onion,” the artist explains of his intent for this work. Carbon nanotubes, used in “Dan’s [Heller’s] lab, for biodelivery and biosensing,” allow Cohen to achieve hues that range outside the visible spectrum. “What we see is only a part,” he explains. “I’m trying to create work that has access to those other spectrums.”

Looking at a Flower is a piece that at first glance looks like multiple layers of interlocking dark lines forming hexagonal shapes. But this work, as well as others in this body of work “can fluoresce in the short-wave infrared,” he states, referencing the visual information both above and below the wavelengths our eyes can perceive, a fuller realization of what looking at a flower might actually be like. 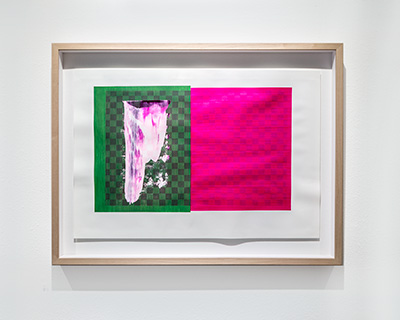 It goes to Cohen’s realization that “we don’t spend a lot of time with art,” a thought that could be interpreted as defeatist. But rather than backing off on multiple meanings, Cohen’s new work has instead doubled down. “It gets richer in the times you spend with it.” Cohen sees the work as communicating on a deeper level. As such, the work can change depending on the light in which it is viewed. It makes use of the same hues, invisible to our eyes, that create patterns on flowers that act as guideposts for pollinating insects.

The artist sees this collaboration as a benefit not only for his work, but for the scientists who enable it. He tells about a cross-campus walk with a researcher one afternoon. They came across a sculpture on campus, and began discussing it. “He felt that he didn’t have access to it.” For the artist, whose work forms a literal bond between art and science, this communicative rift between the disciplines is not a foregone conclusion.

“The best audience for me is doctors,” he states. “There is a void for expression coming out of their wheelhouse.” Cohen is referring to art when he says “in a perfect world, the fruits of our labors would be appreciated,” but he could just as easily be speaking to science’s shared conundrum.  Fortunately, artists like Cohen have beauty on their side—a lure that can render science’s more esoteric aspects both poetic and urgent.