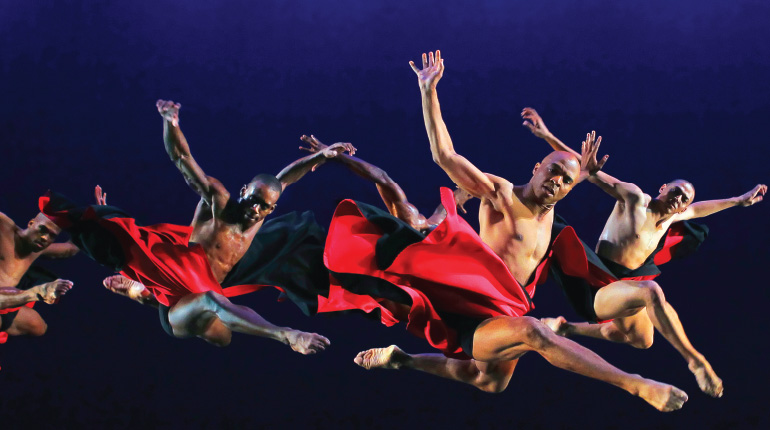 Under the Great Dance Umbrella

WHEN THAT TRANSLUCENT WHITE umbrella floats on stage during Alvin Ailey’s masterwork “Revelations” during Alvin Ailey American Dance Theater’s return to the Society for the Performing Arts Jones’ Hall stage on March 2–4, it will be a historic occasion. Although the event marks the company’s 16th visit to Houston, it will be its first with Robert Battle as artistic director. Battle took over the helm from the legendary Judith Jamison in 2011, one of the most significant successions in the history of modern dance.

Battle in Houston
The Ailey connections run deep in the Houston community. Battle has been a mentor to Marlana Walsh Doyle, The Houston Metropolitan Dance Company’s artistic director and dancer. Doyle met Battle in 2001 at Point Park University while he was setting the “Envelope” by David Parsons and his own “Mood Indigo.”

“We became friends instantly, and have stayed in touch ever since,” says Doyle. Battle subsequently came to Houston to set “Strange Humors” and “The Hunt” on the Met. “I have always been a huge admirer. Robert has helped out the Houston Met and my direction for the company tremendously, and he has referred wonderful choreographers to us, like Kate Skarpetowksa and Jason McDole (former dancers in his company),” says Doyle. “I’m proud of his new position at Ailey and feel that his intelligence, creativity, knowledge about dance will be influential for years to come.”

Curator/Artistic Director of Dance Salad Festival, Nancy Henderek, brought Battle in twice; once with “Strange Humors” in 2002 and again with “Takademe” in 2003, danced by Kanji Segawa, who is now a dancer in the Alvin Ailey company. Henderek recently saw Battle in the Ailey studios in NY. “He is so relaxed and happy being the new director. It was a job waiting for him,” says Henderek. “I knew Alvin though my dancing days in Sweden when the Ailey company was on tour in Europe. The company always rehearsed in Claude Marchant’s studio in Gothenburg, where he had a company that I danced in. Claude and Alvin were close friends, so he liked to come to our studio. I spent hours watching Alvin interact with his dancers. He was a warm human being. I feel there is a real connection between Robert and Alvin. They both share being sensitive people and artists with trusting smiles as large as life. Robert is so good for the company. I can feel Alvin through him. I understand why Judith Jamison chose him to lead the Ailey company.”

Company connections
Ailey company members have also made an impact on Houston’s dance community. The African Dance Society, founded by Madeleine Pate Wright at Houston Community College, brought in several company members over the years, including Marilyn Banks in 1989, Dwana Smallwood in 2003 and 2005, and Glen Allen Sims in 2007.

In 2009, current Ailey dancer Hope Boykin set “A Long Journey Home” on Ad Deum Dance Company, a dance tailored made to the small troupe’s strengths. The last time the company was here, Ad Deum watched Boykin triumph in “Go in Grace,” with award winning singing group Sweet Honey In The Rock, in her second work for the Ailey company.

More recently, rehearsal director and guest artist Matthew Rushing was in town to visit with Ad Deum and its director Randall Flinn. The two talked teaching and choreography while Rushing took classes with Ad Deum and joined in the company’s communal culture while on vacation.

Houston dancer makes the ranks
There’s always something truly exciting when a Houston son makes the ranks of a major dance company like Ailey. Marcus Jarrell Willis’ story has fate written all over it.

“People were telling me that I should be dancing with Ailey before I even knew the company existed,” recalls Willis. As a teen, he left Houston to attend the Ailey School, eventually landing a coveted spot in Ailey II. Other than two years between Ailey II and joining the company in 2008 when he guested with Dominic Walsh Dance Theater, Willis’ dance career has been involved with the Ailey institution. Dancing on home turf is equally exciting and nerve wracking for Willis, who was new to the company for Ailey’s last Houston show.

“It was overwhelming because my family had not seen me dance in a long time,” recalls Willis. “This time, I’m more relaxed; I feel more in my own skin.”

Willis finds a challenge in each piece.

“Robert’s work is hard for me. “The Hunt” is about raw power, and I’m more on the fluid side,” he says. “My nickname is ‘Crazy Legs Willis’ because I’m so loose and limber. I have to work to get that aggressive spirit down.”

The relentless pace of Harris’ “Home” took some getting used to. “Rennie used to tell us if we had one more minute to live we would be OK. That runs through my mind while I’m dancing,” say Willis.

Houston audiences come for the variety, but “Revelations” has to be in the mix. Last June, in an unprecedented outreach program, SPA brought in two Ailey teaching artists who worked with 150 Houston area students, utilizing “Revelations” as an inspirational framework for creative writing and dance. Performing “Revelations” for the first time with the Ailey company caught Willis off guard.

“I had performed it with Ailey II, but this was different,” he says. “Standing under that famous umbrella next to Matthew Rushing and Renee Robinson, who were my idols growing up, was truly amazing. I felt part of something big.”