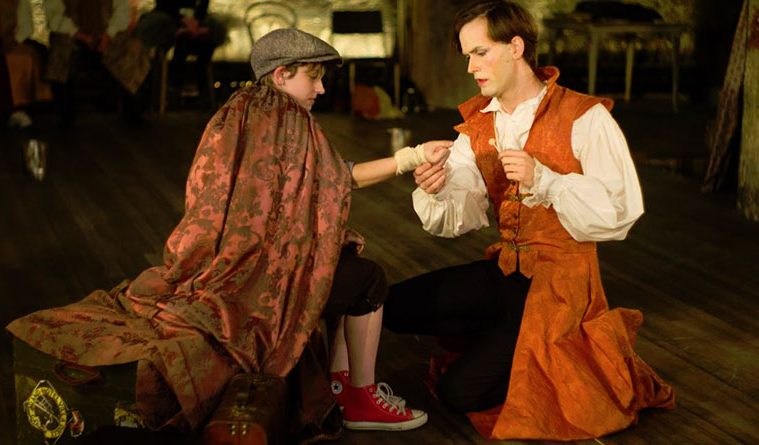 Undermain Theatre gets Meta in The Droll Or, a Stage Play about the END of Theatre

Katy Tye and Justin Locklear in THE DROLL.
Photos by Katherine Owens. 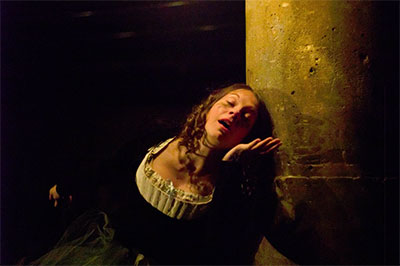 Jenny Ledel in THE DROLL.

Playwrights and filmmakers alike have a long history of creating art about creating art. From Singin’ in the Rain to It’s Only A Play, they’re fascinated by their own craft and, more often than not of late, its prophesied demise.

Dallas audiences can see a winsome, occasionally manic production of her most recent play, The Droll Or, a Stage Play about the END of Theatre at Undermain Theatre through Oct. 17.

The Droll, directed by Blake Hackler, revels in its theatrical allusions. Set in an unknown place and time, the play follows a group of characters who reside in a land in which theater has been outlawed for some unknown reason.

The plot is simple and not particularly original; a young boy’s love of theater ignites the waning passions of a troupe of on-the-run players and together they attempt to stage a production of Hamlet, whatever the cost. 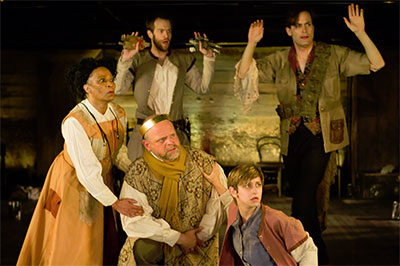 It’s full of literary and theatrical stereotypes (Shakespeare, unsurprisingly, plays a rather outsized role) and humor and characters which will be familiar; the troupe’s refusal and/or inability to make mention of the, gasp!, King, Queen or Crown, there’s the fundamentalist Roundhead (Anthony L Ramirez in this production) intent on scorching out the art of the people and a tired plot, which revolves around the importance of theater and the reinvigorating power of youth.

The conceit of Miroshnik’s play, if not wholly original, could perhaps at least have worked on a purely comedic level. Unfortunately, her stylistic choice of creating a made-up language for her characters, which comes across as a satirical send-up of Elizabethan English with just enough modern slang and nonsense words thrown in for effect, confuses rather than entertains. Although I’m unclear how much of my confusion had to do with the language itself as opposed to the actor’s delivery. Maybe a combination of both. 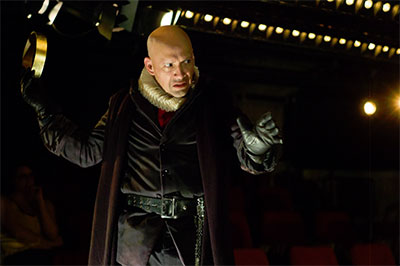 Anthony L. Ramirez in THE DROLL

If much of what’s happening on the stage doesn’t make sense, at least the cast is fun to watch. Katy Tye plays the role of Nym, the young, “theatrical fanatick” who re-ignites the proverbial flame in the aging prime actor (Jack Greenman), with passion and naivete. Justin Locklear as Rosie, the player of women’s parts and Alex Organ as Will, the supporting actor, play their roles with immediacy and humor, and Ramirez’s Roundhead is a light-hearted villain who valorously takes on what seems like the largest amount of Miroshnik’s nonsensical dialogue.

I hesitate to recommend the meta-play be retired, there could, perhaps, be something left to do with the genre, but The Droll makes that possibility seem rather remote.