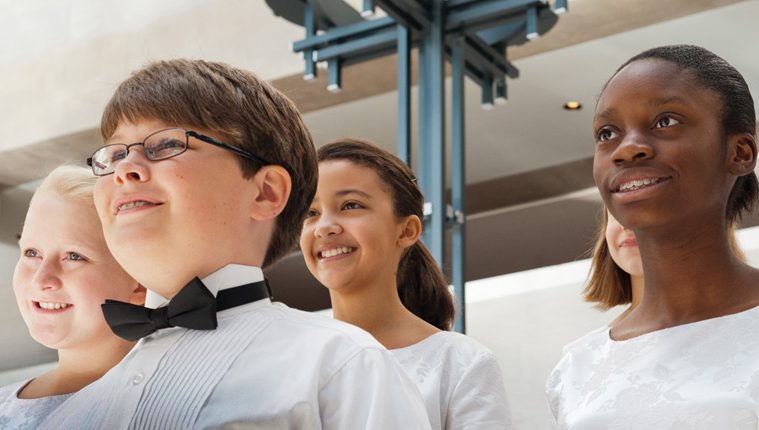 It’s late on a cool November afternoon and chaos reigns in the basement of the First Presbyterian Church in Dallas. Kids are running here and there, parents are begging for restraint, music is being dispersed, young friends are chattering about this, that and the other. The volume level is soaring into the heavens. It is shortly before the final rehearsal ahead of an appearance at the prestigious Meyerson Symphony Center for one of the many choirs that make up the Children’s Chorus of Greater Dallas organization. Tonight, a treble choir for girls and boys in the fourth-eighth grades has assembled.

The clock ticks to precisely 5:30 p.m., which begins rehearsal. Suddenly, the noise of squeaky young voices fades, as the kids scurry to take their carefully marked seats. What was once a wall of sound is replaced with a sustained singing “oo” vowel. Quiet at first, it grows in volume as it replaces the chatter. The “oo” is both ethereal and captivating as parents and onlookers watch from the pews.

The magical “oo” was started by Artistic director Cynthia Nott. It is a call to settle down and concentrate and it is amazingly effective. Within seconds, young performers are sitting upright in anticipation, all eyes on Nott. No one squirms.

Now in total control, Nott begins with some physical stretches and vocal warm-ups that includes a trip through the vowels. ‘Mee’ and ‘meh’ are small vowels she reminds the eager singers in a cheery voice. ‘Oh’ and ‘ah’ are the tall vowels. The sound changes as they do what she instructs. In this, she is right in line with the bel canto style of singing that has dominated opera singing since the 1800s. Pure vowels in a singing line and focused in the “mask” — the bony part under the eyes. She is equally strict about using musical terms. “Who knows the ‘l’ word for smooth,” she asks while trying to get a better line in a phrase?

Hands shoot up. No one volunteers the answer but many obviously know it. Nott calls on one particularly barely constrained boy. “Legato,” he proudly states. Such a feather in his cap. “That’s right,” Nott said. “Superglue it all together.”

At one point, after Nott gave a cut off, the kids were too excited by the music to restrain themselves and began to talk to one another. “Stop the choir noise,” Nott demanded in the sweetest possible way. “We just wasted 30 seconds,” she said, expressing a hint of disappointment.

In fact, that attitude defines how Nott rules with a combination of high energy and a restrained cheeriness. She speaks rapid fire when they are not singing and sometimes even when they are, tossing out reminders and warnings of what is ahead. Once, when some “choir noise” followed the end of one of the pieces, it took little more than a quiet “I’m waiting” to restore order. She readily admits her mistakes. Once, while singing along, her words were a verse off. “Did you all forget those words too,” she said with a laugh.

Orderly deportment is also increased by a team of adult assistants. Nott asks them to stand at the front and to pick out children who are doing exceptionally well as they sing. This has a dual purpose, of course. First, it gets the children accustom to being watched and scrutinized while they sing, while it inspires them to try to outdo their compatriots.

But there is little doubt on what is considered proper demeanor. Nott’s prescription for how to stand while singing is simple. “Up straight, hands at your sides, eyes on me, and don’t look like a zombie.”

The choir has excellent diction, unplagued by the dreadful “r” that is so common in English. They simply don’t acknowledge that the “r” is there. “Tower” becomes “tah-wah” and “hurry” is transformed to “huh-wee”, and it reads perfectly to the audience’s ears.

Nott spent a good 10 minutes on concert etiquette. Anyone that has ever sung in a choir knows that someone somewhere in the audience is looking right at you every second of the time. Kids don’t know, or remember, this fact. She gave instructions on how to yawn with your mouth closed and how to ignore everything extraneous that is going on. “If your parents wave at you, don’t wave back. Don’t scratch anything. If the person next to you makes a mistake, ignore it. If you feel faint, sit down and put your head on your knees. If the person next to you does this, pay no attention.”

Nott is especially proud of the fact that all of the choruses only sing fine music. The November concert had compositions by such respected composers as John Rutter, Randall Thompson and Carlyle Floyd. Many similar organizations dumb down the music, singing simple arrangements of popular tunes. Not here.

The group performs collaboration with other professional arts groups such as Dallas Symphony Orchestra, Dallas Wind Symphony, Dallas Bach Society, Greater Dallas Youth Orchestra and at local, national and international venues such as Carnegie Hall, the Vatican, Chicago’s Symphony Hall and Toronto’s Skydome. Next performance is a holiday show at Meyerson Symphony Center on December 14.

Aside from the musical aspirations of the Chorus, another community is served — children that are home-schooled. Singing in the chorus offers a much-needed socialization. I was able to grab the attention of one live-wire, Haven Emery and her mother, Jill. Haven is a first-year chorus member, home-schooled in fourth grade. I asked her if being in the chorus is what she anticipated before joining. “Kinda,” she responds. The best part is that I get to know new friends. Like the girl that sits next to me, Jessica. We are now best friends. We both do home-school.”

Her mother chimes in that participation in the chorus offers her the chance to meet kids her own age. I ventured that home school doesn’t really offer a choir. “Well, I have four kids so we could do a quartet,” she said with a laugh.

When I asked if it is it hard to memorize all of the music, Haven scoffed at the idea. “Once you get to love the music, then the memory part is easy,” she said. Getting to love the music is what the CCGD is all about. Cynthia Nott sees to that.