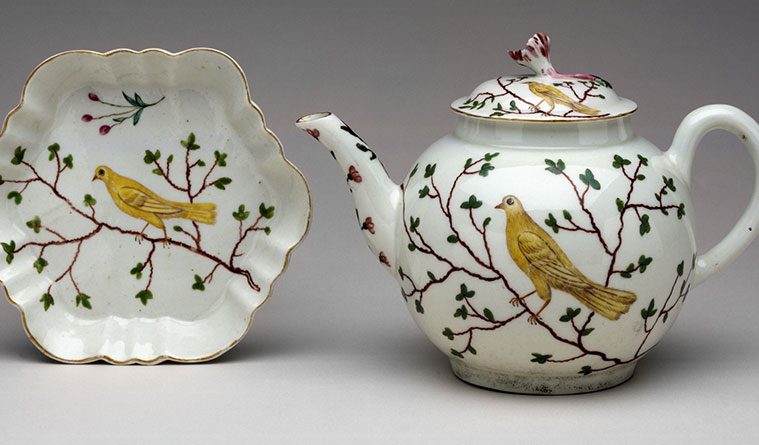 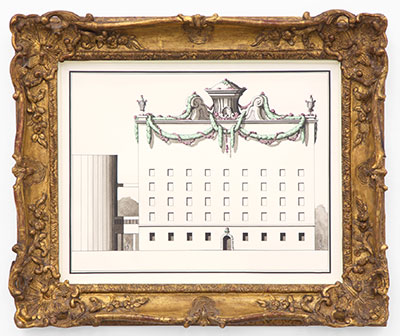 Pablo Bronstein at the MFAH

Tucked away inside the Museum of Fine Arts, Houston is a playfully pensive exhibition by Argentine-born, London-based artist Pablo Bronstein. Comprised of mechanical wall decals, neoclassical inspired architectural drawings, and historical 18th- and 19th-century teapots, the contents of Pablo Bronstein: We Live in Mannerist Times are deceptively restrained. Each layer—wall décor, drawing, and object—distinguishes itself through its unique ties to space, time, history, and imagination. Viewers of this cheeky and delicate exhibition will find themselves caught in a visual performance that both celebrates man’s talent for creating objects and satirizes our cultural proclivity for production.

In visual art, mannerism is characterized by its sophisticated realization of artificiality, rather than naturalism. Often there is a skillful manipulation of proportions, such as with the elongation of figures’ bodies—fingers, arms, even necks—in these works, providing the pieces with slightly surreal and unsettling undertones. In this effect, Bronstein’s drawings are no exception. Rendered in black ink and watercolor—with occasional blocks of soft monochromatic color—these works depict the artist’s own designs for real English porcelain factories from the 1700s and 1800s. Bronstein brings to life seven of these buildings in a flat, illustrative style. Each is depicted in a portrait-like drawing and is noted by a particular, impossibly over-sized architectural decoration. For example, a row of impressive, vase-adorned columns tower high above their associated structure in Bronstein’s drawing Worcester Porcelain Factory; while in Derby Porcelain Works, a smokestack shaped like a stern griffin is comically perched atop a factory nearly equal to its own height. And in a third, Copeland Spode Porcelain Factory, an enormous semi-sphere sits deeply recessed into the façade of the building, peering intimidatingly at the viewer like the sinister, half-open eye of a Cyclops. 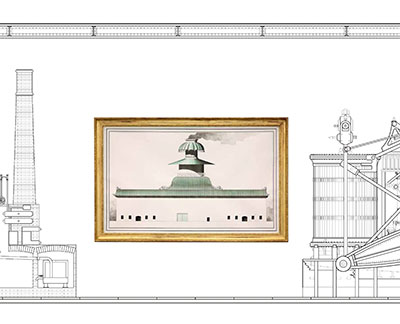 In most of these drawings, the weight of the enlarged architectural feature is supported by a perfect, petite row of dark, shutter-less windows, miniature, classical post-and-lintel doors and tiny pediments. Standing at about half the height of the doors are the humanoid figures placed around, or sometimes within, the intricate and elegant decorations of each building. The works are masterfully scaled to make the viewer feel as if he is shrinking to the size of these smeared, faceless mannequins each time his eye travels down a work. Yet, despite this perceptible change in scale, the drawings are quite flat. Perspective is head-on; and all objects are contained within the foreground, which builds tension further. Only occasionally do shadowy forms of clouds or foliage appear far in the background, poetically depicted by the billowing contours of Bronstein’s layered watercolors.

The exhibition’s overall effect is politely surreal and a bit unnerving—but excitingly so. In this exhibit’s space, Bronstein toys with perspective beyond the gilded frames of his works by adding decaled cross-sections of large machine parts onto the walls. Although these forms seem familiar, it is unclear how each mechanism is connected; there is also a lack of direct evidence indicating what is being produced. Still, the benign cleanliness of these machines is pleasant, and their presence offers the audience an appropriate interior to Bronstein’s buildings (whose windows only communicate mysterious shadows). When viewed against the wallpaper, the ink factories suddenly take on the appearance of grand dollhouses. This vantage point creates something like an infinity mirror effect, and the viewer worries that he might be looking out from inside one of these quiet, pristine buildings. The antique teapots that pepper the center of the room are the final crack in the viewer’s sense of “reality” in the exhibition space. Provided by the MFAH’s Rienzi Collection, many of these fine decorative objects were created in the real porcelain factories (e.g. Wedgwood, Minton, and Worcester) that Bronstein reimagined in his drawings. Ornamented in floral and geometric designs or naturalistic scenes, these rich and measured articles are the privileged survivors of the Industrial era—a time that marked the blossoming of capitalism and one that we know to have been anything but pristine.

Although works in Pablo Bronstein: We Live in Mannerist Times nod to a neoclassical style, their unsettling elements of mannerism undermine our cultural appetite for materialism. Faced with the definite weight of decorative components in these architectural drawings, we are cautioned to regard the splendor of man-made objects with restraint and, perhaps, encouraged to examine the neglected beauty of our own lives and forms with greater respect.