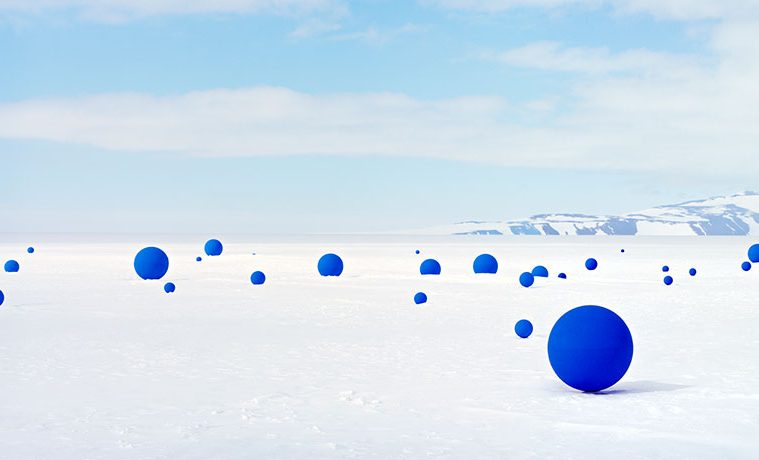 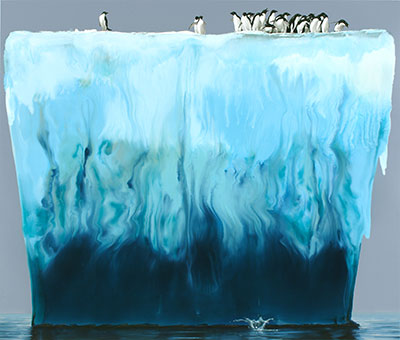 Vanishing Ice grounds itself in an art historical record; drawing on nostalgic, romantic notions of the sublime, the exhibition identifies the artist’s role in nature and society as record-maker and informer, one who responds to notions of beauty first and foremost.

This strictly aesthetic rear-view perspective on artistic response to environmental change provides several dramatic moments of contemplation. One example is Athabasca Glacier, Jasper National Park, 2005, a photograph taken by Gary Braasch for the purpose of comparing historical views of the same subject, in this case Arthur Oliver Wheeler’s Athabasca Glacier, Jasper National Park, 1917 (printed 2013). Braasch’s image confirmed scientific data that the glacier has “lost half its volume and retreated almost a mile (1.5 km) since its discovery in 1898.”

But instead of creating a sense of urgency, I found these visual comparisons kept the surreal landscape at a distance, with drastic changes happening something other than where I stood to view the photos. Looking past the exhibitions tropes—the Arctic-themed blue and white painted walls, wordy didactic labels that include “Cool Facts” that attempt to contextualize  scientific or historical data, I searched for artworks that bear witness to the glaciers’ direct effect—and devastation—on my everyday life. What I found was evidence reinforcing the artist-explorer persona and ego, from 18th-century adventures to today’s popular Cape Farewell art expeditions. 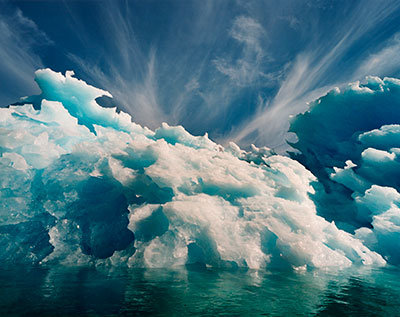 There are moments in Vanishing Ice of misplaced enthusiasm, as in the case of Astrid (2007) by Xavier Cortada, a past participant in the National Science Foundation Antarctic Artists and Writers Program who “extends the tradition of Earth art.” Cortada created his paintings with the very glacial ice that is disappearing. Although minute in comparison to the overall measurable loss, I can’t help but see his paintings as a glaring antithesis to the poster didactics, charts, and statistics in the educational portion of Vanishing Ice, calling on world citizens to do their part to help reverse, impact or halt climate change, no matter how small their act of conservation.

The exhibition has it successes, however, with artists like Anne Noble and Chris Jordan creating images that hit closer to home that most in the exhibition. Noble’s piece Wilhelmina Bay, Antarctica, from ICEBLINK (2005), shows a view of the Antarctic landscape from the deck of what might be a tourist cruise ship, complete with clothed plastic tables and chairs, poised for dinner guests, emphasizing commodification of nature and the growing popularity of environmental tourism. Jordan’s Denali Denial (2006) recreates an Ansel Adams photo with 24,000 logos from the GMC Yukon Denali, equal to six weeks of sales of that model SUV in 2004. These works are powerful, yes, but can they make an impact in a culture saturated with images?

Matilsky has done a solid job of curating a “beautiful” exhibition, balancing documentary photography and data research with imagery. But she has overlooked, intentionally or not, contemporary observations on the lived experience of negative environmental change. Glenn Albrecht, Professor of Sustainability at Murdoch Universityproposes “solstalgia,” an experience exacerbated by a sense of powerlessness or lack of control over the unfolding change process (and, I would argue, complicated by the fact that humans are to blame for the negative changes).

As a global culture, our awareness of and response to global climate change has historically moved all too glacially—perhaps even slower. Vanishing Ice shows that, all along, the change has been happening right before our eyes, and now at a frighteningly rapid pace. Ironically, the glaciers now outpace our efforts to save them, and ourselves.