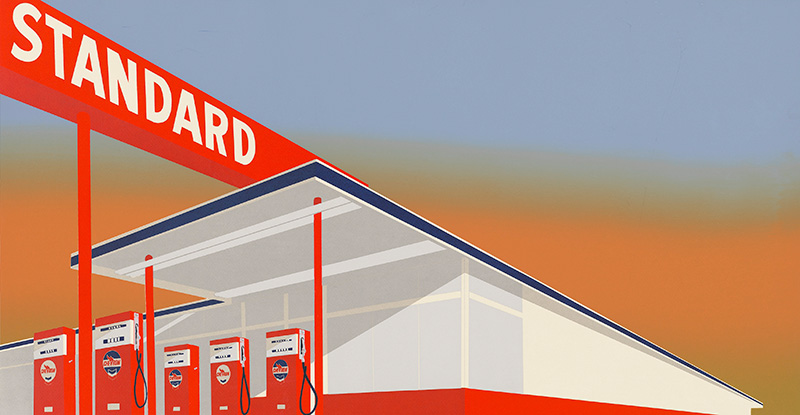 Visions of America: Three Centuries of Prints at the Dallas Museum of Art

A captivating exhibition of over 150 prints drawn from the National Gallery of Art in Washington, D.C. has quietly opened at the Dallas Museum of Art as if it flew in under the radar. Visions of America: Three Centuries of Prints From the National Gallery of Art, on view through Sept. 3, depicts how American and European-American artists pictured their times and experiences, and includes work executed between 1710-2010 by over 100 artists. The DMA is the last venue to welcome these important artworks after touring abroad, making it the only place to see the show in the United States.

Curators arranged the exhibition in chronological order, winding through 7 galleries arranged in a horseshoe format. The first gallery features detailed displays and models that explicate the numerous printing processes that artists used, clarifying the distinctions, strengths, and subtleties among them. The exhibition argues that prints are inexpensive and democratizing images that “offer us a record of the tastes, ideals, anxieties, and aspirations of their makers and their audiences, providing insight into how people have responded to the social, cultural, economic, and political demands of their time and place.”

It is well known that printing began with wood blocks in Asia around 220 AD, but an etching process using metal plates began to appear in Europe in 1515. The same process was brought to the New World with some of the first examples on display in this show. It was first used for documentation and, at times, for political purposes as seen in Paul Revere’s The Bloody Massacre, 1770, that refers to a murderous attack by British soldiers who shot at unarmed civilians. Revere depicted the event in a hand-colored engraving that was widely circulated, spreading awareness and fomenting anger in the mind of the public in the years leading up to the revolution. Curators placed this in the Transatlantic Exchange section along with images of socialites, landscapes, and indigenous people. For example, John Hill’s View From Fishkill Looking West presents a gorgeous landscape filled with color and sunlight. By contrast, John Simon’s full figure portrait of Sa Ga Yeath Qua Pieth, King of the Maquas depicts a proud warrior king in black and white, complete with tribal tattoos, sporting a cape while holding an ominous musket.

The next section, Expansion, Conflict, and New Markets chronicles events in the 19th century concerning new frontiers, commerce, and the civil war. The last two-thirds of the exhibition, beginning with the section titled The Artistic Print, shifts away from history and documentation toward aesthetics, illustrating how visual artists used the printing process to explore texture and painterly effects. Printmaking is a process laden with technical specifications and mechanical precision, two things usually far removed from the fine arts.

Some of the most engaging pieces are in these sections. A suite of prints (absolute gems) by the American Impressionist Mary Cassatt are drawn from a set of 10 she created as a response to an exhibition in Paris of Japanese woodblock prints in 1890.  They depict upper-class women performing daily tasks, as seen by Cassatt through an impressionist lens. She includes Japanese patterns with wide areas of flat color, evident in her rendering of the carpet and skirt in Woman Bathing, a drypoint and aquatint etching.

Looking Up, Looking Down groups together prints that depict New York as an emerging urban center, densely populated with skyscrapers, and a commercial hub whose rapid expansion was not without casualties.  Artists like George Bellows were drawn away from the tall buildings—he focused his gaze on sites of popular entertainment where everyday people, also the poor and downtrodden, intermingled and passed through the busy streets.

In the lithograph A Stag at Sharkey’s, one of Bellows most iconic compositions, two stag boxers fight it out in the ring. Together with the referee, they occupy the center of the composition, surrounded by the ropes and figures that watch with glee as the pitiable figures beat each other. Bellows placed the onlookers at ring height and in the foreground so that the viewer takes up the same vantage point, creating a sense of immediacy. That these matches were clandestine, illegal, and done out of a dire need for money did not escape Bellows who imbued the image with social commentary through satire via the shading, action, and the pathos found in human exploitation.

The exhibition winds its way through U.S. history, examining the Great Depression and the aftermath of the Second World War, coming finally to a section dealing with the cold war titled War And Abstraction. Here, we see how icons of the New York School of abstraction, like David Smith and Jackson Pollock, dealt with the new anxieties of a nuclear age.  A fascinating full figure woodcut on Japanese paper, The Hydrogen Man, 1954, by Leonard Baskin, meditates on the first hydrogen bomb test.  This dark figure, presumably once a healthy man, is now missing a limb and stands in an uneasy contrapposto with exposed and eroded genitalia. Holes are all that’s left where his eyes once were—they portend a type of blindness about an impending nuclear calamity in Baskin’s profound warning.

After an examination of Pop Art in Popular Culture, the final gallery takes up the last 30 years of print output designated as Pluralism, with a wide array of styles representative of the time. Prints with recognizable imagery indicative of particular artists like Richard Serra, Kara Walker, Glenn Ligon, the Guerilla Girls, Kiki Smith, and Vija Celmins wrap up a unique exhibition full of the drama and historical ruptures that formed the American experience over the last three centuries.