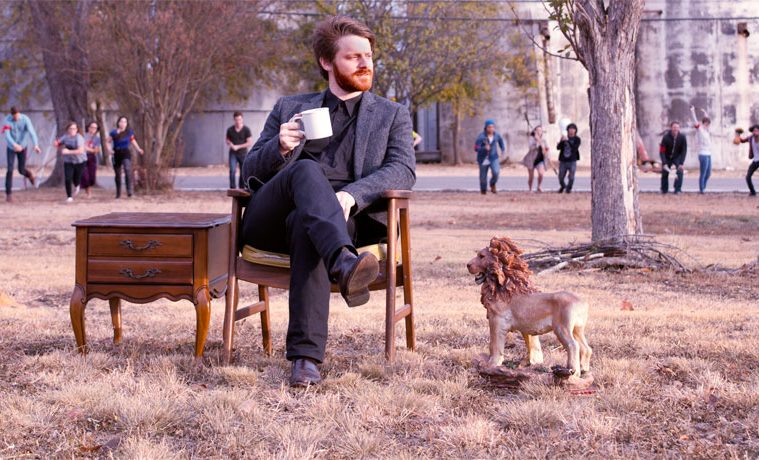 Walker Lukens is a Houston-born singer-songwriter living in Austin after a brief stint in New York. Walker’s style fuses sad-bastard sentimentality with Bruce Springsteen panache in an easily relatable, radio-friendly package. You might have heard him on NPR’s “All Songs Considered” or seen him rocking out with his band, Walker and the Side Arms, in his live recording of “When I Lost You Goddamn I Lost,” filmed in the Texans’ “Bubble” Practice Stadium.   Devoted, his new album, is an infectious incarnation of American rock and roll composed with the calculated grace of a practiced songwriter.  A + C music writer Phillip John visited with Lukens before he hit the road.

A+C: When you arrived in New York, what were the obstacles you encountered in trying to continue the music you began in Texas?

WALKER LUKENS: I realized was that there were a million people doing what I was doing, singing and playing songs with an acoustic guitar.

WL:   Singer-songwriter, a dirty word. Second was that I never had any trouble getting a band together, and then I moved to New York, where I didn’t know anybody. Also, logistically, you can’t throw things in a car and drive to the show, which really makes you reconsider what you want to bring.

A+C: Looking at the limitations, what kind of equipment did you use to make the new sound and was it a response to those limitations?

WL: At first I thought I was going to become the greatest guitarist in the world, but I realized it was too late.

A+C: You missed the Suzuki boat.

WL: So I bought a loop station and tried to make as much noise as possible without a computer, trying to get an interesting live show. But, honestly, it didn’t change much. It just got louder.

A+C: Did you ever have a successful break and/or think it’s time to go home?

WL: I moved up for a girl so when I threw a grenade into that relationship, I never put moving out of my mind. I went on a tour from New York down to Texas and got to play for people outside of New York. It reminded me that there are other audiences that aren’t so jaded. I’m not sure I ever I felt like I was making it in New York, but I became much more confident in my songs. It made me push myself really hard, and I don’t think that would have happened if I had stayed.

A+C: When you came back, was there another stage of metamorphosis?

WL: No, but I did finally get to put together a band to play the album that I had recorded in New York. Getting to play with a band again was such a relief. By yourself, it’s like stand up comedy, but with a band you can create a mood.

A+C: You’ve enjoyed some good press recently. How do you keep the notoriety from going to your head?

WL: Getting good press has been very validating if nothing else. At times, I feel like I make music in a vacuum. Going on tour exposes you to more people, but only so many. I think I naively believed that good press was the one thing missing from my career. It isn’t. That’s why it hasn’t gone to my head.

A+C: Does the band have any influence on what’s played or is it all your design?

WL: When it comes to the live show, I’m just one member of a five-piece band. As the band continues the writing will become more democratic. They have had a pretty big effect on how the songs sound live.

WL: I loved living in New York, but in order to build a network like the one I had in college, it would take a decade. There’s a great Patti Smith quote: “New York is dead; people should just stay where they are.” The new lower Manhattan could be Kansas. People ascribe too much value to a place, and it’s about the people in the place. You can build that community anywhere.