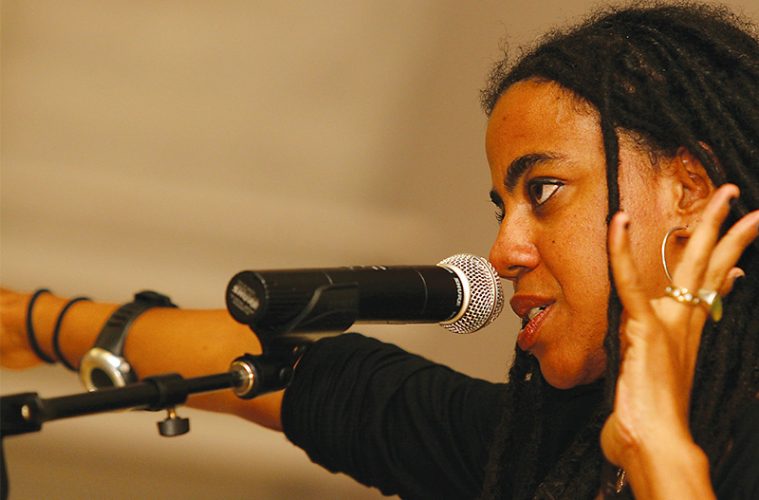 In 2014, internationally renowned playwright Suzan-Lori Parks began her much-discussed “Watch Me Work,” an occasional performance on Monday evenings in which audiences can quite literally watch Parks working on her newest writing projects on the mezzanine of the Public Theater in New York. Audiences are invited to watch Parks write and share the space, working on their own writing projects. During the last part of the performance, Parks engages in a dialogue with audience members, discussing their creative processes and answering any questions. While New York audiences have been able to get an up-close-and-personal with Parks for years, Houston audiences will get the chance to see just what makes Parks one of the most dynamic living artists of any genre. Suzan-Lori Parks, a MacArthur “Genius” Award winner, will deliver the annual 2018 Mitchell Artist Lecture on October 30 at the Moores Opera House at the University of Houston.

Presented by the University of Houston Cynthia Woods Mitchell Center for the Arts, the annual Mitchell Artist Lecture highlights artists who are emblematic of collaboration and innovation. They are tasked with speaking to the power and potential of interdisciplinary collaboration both to the university community and to the general Houston public. Previous speakers have included Tania Bruguera, Jason and Alicia Hall Moran, and Bill T. Jones. 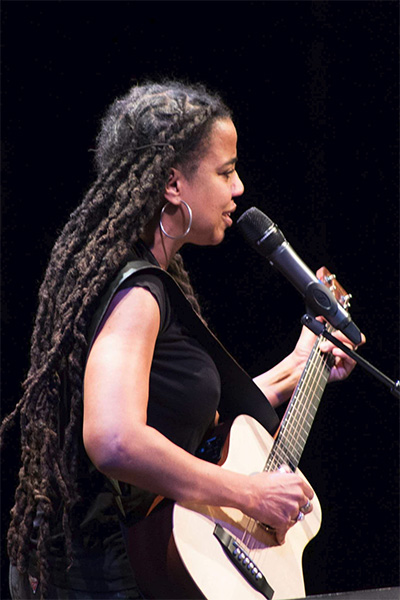 Photo courtesy of the artist.

It’s no coincidence that iconic writer, James Baldwin, once affirmed that Parks was “an astonishing and beautiful creature who may become one of the most valuable artists of our time.” While Baldwin’s words may appear hyperbolic, they are, in fact, anything but a stretch. It wasn’t until she began taking classes with James Baldwin as an undergrad at Mt. Holyoke that she began to write plays and understand how theater could be a platform for activism. Since then, Parks has become one of the most important living playwrights, one known for her experimentation and exploration with language and dialect in addition to plays that speak to the African-American experience in a fully nuanced, three-dimensional way.

The first African-American woman to receive the Pulitzer Prize for Drama (for Topdog/Underdog, recently seen at the University of Houston and at the Alley Theatre in 2009), Parks has been widely considered one of the most innovative and important voices writing for the American Theater of this century. Parks has won nearly every coveted award in the industry while amassing a dynamite body of work including Topdog/Underdog; Fucking A; 365 Plays/365 Days; and Father Comes Home from the Wars, Parts 1, 2 & 3. The New York Times named Topdog/Underdog one of the best American plays since Angels in America. Needless to say, Parks is anywhere and everywhere, making her visit to Houston all the more important as the local theater community continues to solidify itself within the national conversation.

Speaking of African-American women playwrights like Alice Childress, Adrienne Kennedy, Ntozake Shange, Suzan-Lori Parks, Lynn Nottage, and Dominique Morisseau, theater critic Hilton Als notes how important it was in his life to be represented on stage and, moreover, how necessary it was that writers such as Parks have “made the recognizable unrecognizable” through their art-making. Through highly stylized and poetic language, Parks is able to comment on the Black experience in America in both an unfamiliar and incredibly familiar way. Through her use of metaphors, Parks plays with the notion of something being both itself and something entirely outside the box, something fresh. Her work is both comforting and intellectually stimulating. While her title may be “playwright,” she is as much a cultural theorist as anything else.

While every artist has their own sense of what innovation means to their work, Parks sees innovation as “telling it like it is.” Because for so long we have grown accustomed to certain societal norms, living authentically, in and of itself, can be innovative. “I’m more interested in what lies beneath the surface of more popular ways of doing things. When you start digging underneath the surface, maybe you find innovative ways of telling stories or writing plays. You can help people who are interested in maybe living more authentically,” claims Parks, adding, “I’m most interested in authentic conversations and relationships and emotions and showing those types of relationships in stories or on stage.”

Karen Farber, Director of the Cynthia Woods Mitchell Center for the Arts, anticipates Parks’ talk to be both inspiring and engaging. “This talk will be compelling to lovers of drama as well as audiences who have never set foot in a theater, since Parks can speak to the American experience in such unusual, yet universal, terms,” notes Farber.

In addition to authenticity and a sense of truth, Suzan-Lori Parks hopes to bring enthusiasm to the Mitchell Artist Lecture: “I hope to bring enthusiasm. In the olden days, it meant ‘close proximity to the spirit,’ and that’s what I try to bring to my lectures: old school enthusiasm.”