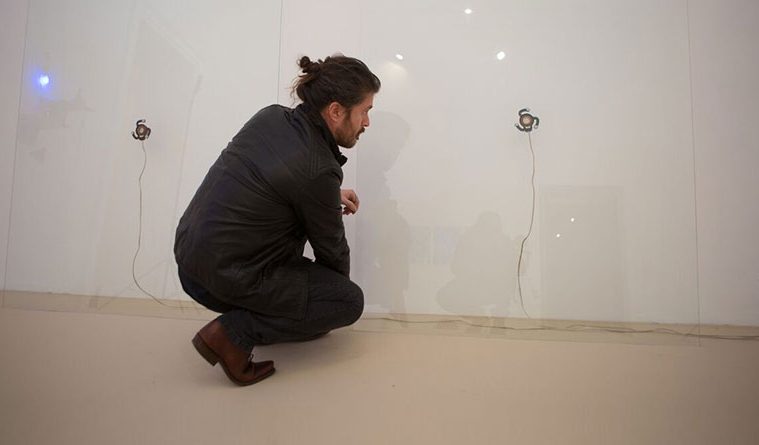 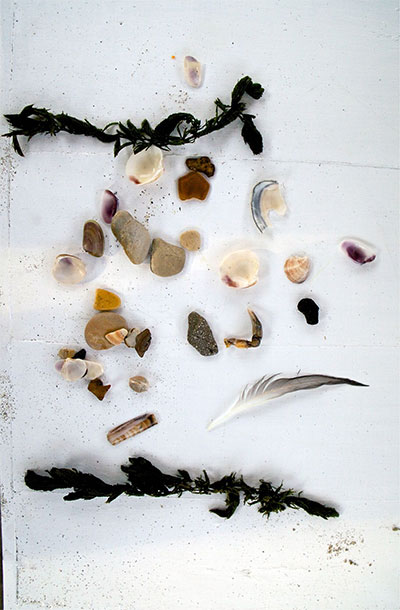 You can expect diversity in the range of art media produced in Texas. Residents often experience works grouped into visual art categories, such as painting, sculpture, drawing, photography, video, performance, and installations. With all the characteristics that sound manages to make, physically and figuratively, we often overlook the genre of sound art. Two Texas-based sound artists, Abinadi Meza and Lina Dib, are making an impact in this sometimes under-recognized form.

Sound art brings an expectation of audio in an art piece for most of its audience. Then it departs from that obligation, and any other media demands, and delves into, though not limited to, context, site-specifics, and experiential modes. “I’m not sure if I chose sound or if sound chose me,” says Meza, recently named Director of Interdisciplinary Initiatives for the newly-formed College of the Arts at the University of Houston.   “I’m highly affected by it. It’s a great spatial material and process. It’s so tactile, physical, and poetic.”

According to Meza, the label has a purpose. “The usefulness of saying ‘sound art’ is to open up the framing of the work to include explicitly visual material or spatial concerns” says Meza. “It’s useful to distinguish these concerns from more traditional musical concerns of instrumentation, and composition. But really the term sound art can and does encompass so much, and I think this is healthy and exciting.” 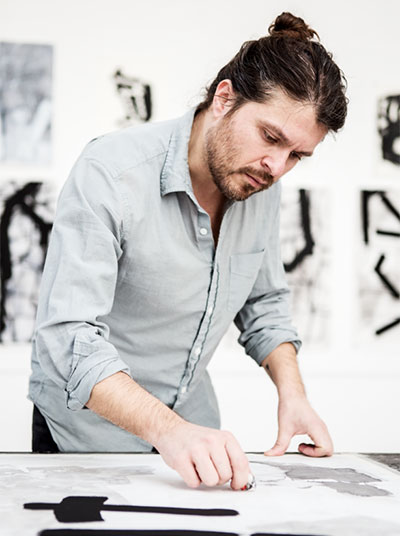 Abinadi Meza in his studio. Photo by Davide Franceschini.

He recently performed in the New Music Miami Festival and Foundation for Emerging Technology and Art, and has upcoming performances in Milan, Berlin and then another sea project in Lisbon (where Meza recently exhibited in the Lisbon Architecture Trienniale).  Meza co-organized a symposium and interdisciplinary project, Deserting the Site, in Houston, May 17-19 and in Marfa, May 24, 27-29, that he describes as “on site, non-site, ecology, paranoia, extra-statecraft, language, sound, anthropogenetics, post-humanism, and deserts.” It is in collaboration with the Ecole de Beaux Arts des Nantes (France) and The School of Art at the University of Houston, where he is an Associate Professor and founding faculty in the Interdisciplinary Practices and Emerging Forms MFA program.

Also in May, he participated in Marfa Sounding, a series of site-specific performances, sound installations, and conversations, exploring the intersection of music and the visual arts in the development of Minimalism, which took place in Marfa, TX. Meza presented a new piece called Room Tone, which is an FM radio transmission of film silences. His exhibit, curated by Diane Mullin, Silence and Echoes, runs June 18-Sept 11 at Weisman Art Museum in Minneapolis.

As amorphous as the description for sound art can be, it moves between distinctiveness and similarities to music and many audio variants. When asked if his work fits the sound art category, Meza responds, “my sculptural pieces and installations are sound art, rather than music, and the history of my influences come from art, literature and film, rather than music. I am completely untrained musically. I can’t even play a harmonica.” 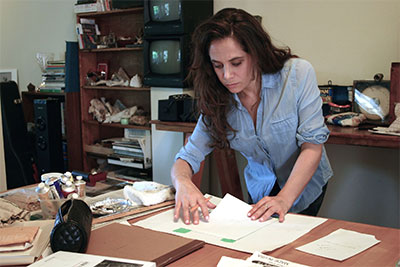 Dib illustrates sound art as “creating occasions for noticing the ways that sound does not sit still. It travels and bounces. It penetrates. It comes and goes. In other words, sound escapes us. In fact, it rushes outward as if escaping itself. Sound art can allow for being in the midst of that, which is constantly eluding us. It can allow us to place emphasis on fluxes and flows, and to inhabit a state of unresolve.”

Dib is also participating in Meza’s Deserting the Site, and occasionally collaborates on other projects with him. She recently went to the Banff Center for the Arts (Canada) to workshop a book about anthropology of the arts, in which she contributes a chapter on sound and considerations of thinking sonically. Dib has a PhD in anthropology and is currently teaching at Rice University.   She was recently awarded an Arts Initiative Fund at Rice University to teach an interdisciplinary class at the new Moody Center for the Arts in the spring 2017. The course will be called Art and Environment: Thinking Alongside Coral Reefs and will involve several modes of art-making including sound art.

Her recent exhibition, Pool of Sound at the Silos at Sawyer Yards, in Houston, TX, involved an interactive sound installation inside a rice silo. Physical movements through the space are translated into sound, which resonate like waves. The installation will also travel to Texas A&M, in the fall as part of an exhibit on climate change. 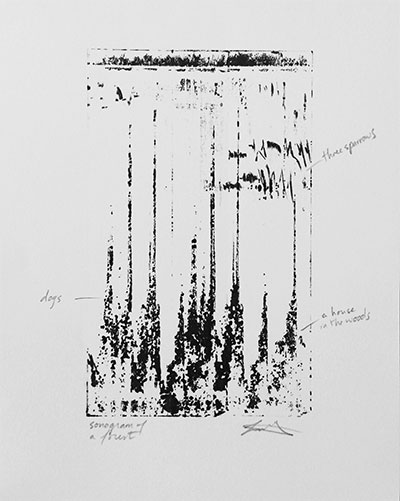 Lina Dib, Sonogram of a Forest, Monoprint- 7×8 inches. Ink and graphite on paper. Image courtesy of the artist.

Dib considered her audience and the role of interactivity. “Creating a rapport with the viewer is important, but I like the work to have a life of it’s own regardless of whether it is interactive or not,” she says. “A similar statement can be made about the use of technology in some of my works. Technology is a way to support what I want to convey or to help instigate the encounters that I want to stage. Technology is not an end goal, and neither is interactivity per se. So, perhaps it’s a question of definitions, if we redefine interaction as an encounter, as being moved by a work, then yes, it is important.”

Adding to the role of interactivity, Meza elaborates: “I don’t usually pursue the kind of interactivity where people can wave their arms at a sensor that changes something in response. I appreciate those works, but I usually pursue something more humble. A few months ago I did a live performance at the beach on the outskirts of Rome. I brought a laptop and custom software, collected found objects from the beach, and used the built-in laptop microphone to perform the objects and the surrounding sonic space. The moment the sound erupted people quickly gathered at the stage. They were amazed at this crazy sound; it was heavily processed by the computer but extremely visceral and sculptural. People handed me more materials: Shells, lumps of seaweed, driftwood, stones, and a beer bottle. They came up close to the sound and stayed, as around a fire to get warm by. Their voices and the waves entered and stayed in the sound. It was an amazing interaction, an explosive possibility for connection, for something to erupt in a space, for people to gather and be together for a little while, for small things to open into sound and expand larger than they appear.”

Though sound participates in several projects with Meza and Dib, their ideas develop from larger and organic experiences. “Ideas come from movements between inner and outer worlds,” states Meza. “Some ideas are responses to what I see, hear, read, etc. and some ideas come from a more interior place. But I don’t see inner and outer worlds as being in conflict or mutually exclusive. An external event can resonate with an internal thought, feeling or memory and vice versa. Of course, there are concepts and concerns that I seem to return again and again to such as nature, machines, space, language, intimacy and ghosts.” 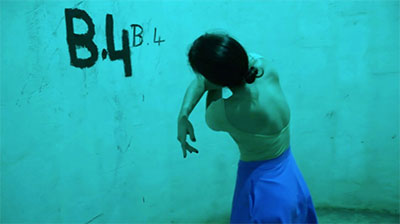 Dib learns from the observations that she makes of her surroundings. “Sounds refract and travel through everyday life,” says Dib. “They carry with them the politics, economics, health and sociality of life forms and ecologies. So I listen. And I love to read—usually non-fiction philosophy, cultural criticism, or environmental or scientific works. And then I play. I experiment. I allow myself to be clumsy and sometimes noisy. Ideas and forms – or sounds, aren’t always neat and tidy at first. And eventually things take shape, usually by a process of simplification, by giving room to one idea, or a certain mood or feeling, or a kind of sound.”

Thinking and representing art projects through sound waves complements the dialogue and discussion of how art transitions from singular mediums to interdisciplinary forms. With the many layers of meaning, materials, representations and experiences that Meza and Dib are showing us, we can find our own ways to experience and understand sound art.