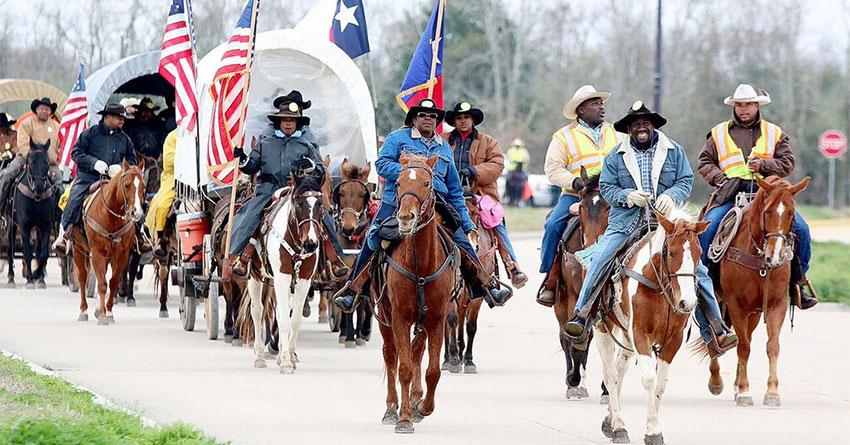 We Are All Folk: The Art of Everyday (Folk) Life

This winter season at MATCH, the Houston Art Alliance’s Folklife + Traditional Arts Program presents Winter Celebrations, a series of installations, live performances and interactive events that promote Houston’s lively cultural traditions, highlighting the Feast Day of the Virgin of Guadalupe, Lunar New Year, and the African-American trail riders, Dec. 2- Feb. 16, 2016. Program director and passionate folklorist Pat Jasper says Winter Celebrations is “very much an expression of my earliest and ongoing interests in aesthetic and cultural systems that have a long and largely unseen (by outsiders) history in communities. And those communities live right here in Houston, practically next door to each other, in the urban sense.”

Aesthetic and cultural systems are largely what drew Jasper to become a folklorist, “an individual trained to explore the ‘unofficial’ culture and expressive traditions of a community.” Unofficial because the stories, music, shared beliefs, special skills and more of a community aren’t taught in formal schooling or represented by art world infrastructures. Instead, they are “passed on” within a community itself, encoding values, history, and identity along the way. In the long run, she believes, we are all folk.

Though she ultimately snagged a double major in Literature and Anthropology, Jasper remained less than impressed with the field of anthropology’s consideration of aesthetics as a primary impulse in cultural life (though she was taken with the groundbreaking work of Clifford Geertz, who advocated for “symbolic anthropology,” or the role of symbols in constructing public meaning). She later enrolled at University of Texas Austin for graduate school, one of the few universities with a PhD in Folklore. “At its core,” she says, “the great percentage of what is studied is one or another form of aesthetic culture or, as I like to put it, ‘art in everyday life’.” She was hooked.

Jasper went on to be State Folk Arts Coordinator at the Texas Commission on the Arts, founder of Texas Folklife Resources and, in 2005, co-director of the intensive project Surviving Katrina and Rita in Houston, with University of Houston colleague Carl Lindahl. Together they partnered with the Library of Congress to place approximately 400 personal narratives into their collections. The project revealed Houston as a changing, and changed, city.

Her current post as director of the HAA Folklife + Traditional Arts Program is a result of her efforts to comprehensively identify, document, and share the cultural and artistic traditions that flourish in Houston through a feasibility study funded by the National Endowment for the Arts. “We do not systematically recognize vibrant artistic forms that exist right smack dab in Houston (or elsewhere),” she says, “because, since they forego the performance stage or gallery exhibition, folk and traditional arts are almost always ‘embedded’ and ‘performative,’ surrounded by the messy, meaningful stuff of social life.”

How, then, might members of different communities – with the varied codes, practices, and traditions – be introduced to each other? If the existing art world structures and traditional arts are somehow at odds, how might the artful display and discourses of those traditions be presented?

Jasper explains that as a public folklorist, she works to utilize some of the existing standard presentational formats (gallery or museum exhibitions, staged performances, etc.), when and if appropriate, for sharing artistic traditions with a larger public. And as for relating to institutional art world structures, she sees the work of public folklorists concentrating in the arts as having anticipated ‘relational aesthetics’ and ‘social practice,’ but “done so on its own terms and by privileging the voice of the artistic tradition-bearer rather than the curator or artist/interpreter.”

That focus on the tradition-barer rather than interpreter is, in large part, what secured HAA’s first Our Town grant, which supported last year’s Transported + Renewed festival in Houston’s East End. Having been awarded a second Our Town grant, Jasper says the Folklife Program goals include research, documentation and public projects that explore the wide variety of established and emerging cultural communities that come together in the greater Houston area.

In keeping with those goals, Winter Celebrations begins with Observing the Feast Day of the Virgin of Guadalupe. Altars to the Virgin, in both private homes and neighborhood parishes, are usually maintained year round, decorated with candles, flowers, photos, and personal items relative to the devotee’s relationship with Her. For Feast Day, Winter Celebrations explores these and other artful practices of devotion associated with the holiday, including an installation of an altar originally crafted by a local woman who has a yard shrine with a fountain dedicated to the Virgin. Her neighbors flock to her home the evening of the feast day to celebrate with food, music, and dance.

Feast Day is also celebrated with a huge downtown procession and Jasper explains that artistic folk activities such as the dance, elaborately decorated garments, and musical accompaniments are “part of a whole that is not focused so much on making a statement to the outside world but expressing devotion and sense of the beauty that the Virgin bestows on the life of the participants.”

This devotion is further demonstrated in Winter Celebrations’ Exploring Lunar New Year, a weeklong series of preparations, performances and displays celebrating the Chinese and Vietnamese Lunar New Year at temples, businesses and residences throughout the city. The season of events and programs is rounded out by Honoring Houston’s African-American Trail Riders, which highlights Houston’s rural heritage, honors the black cowboy, and makes visible the art of the ride.

“From the outset the field of public folklore has been conducted from the perspective of cultural equity and social justice and parity,” says Jasper. “This is the approach we take with all three segments of Winter Celebrations. We are not trying to aestheticize these traditions; we believe they are already artful displays and discourse on their on terms. However, we are trying to tease out elements of these traditions for the uninitiated and, in words we have used more than once to describe our work in the Folklife + Traditional Arts Program: to introduce and educate Houstonians about and to each other.”