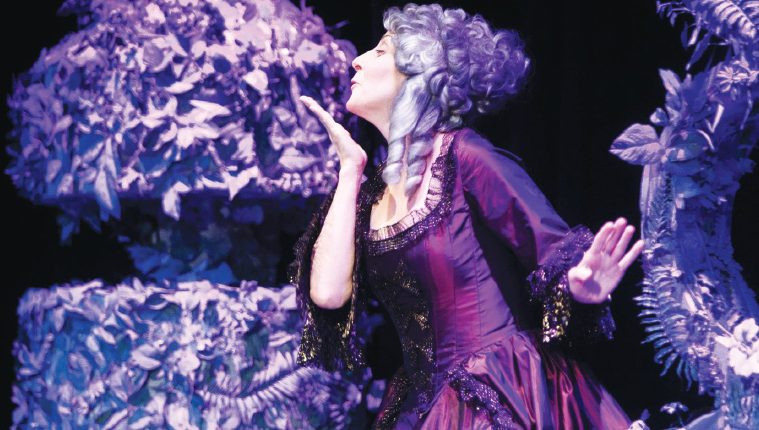 Pamela Vogel in Pierre de Marivaux’s “The Triumph of Love.”

John Johnson, viagra 60mg known throughout Houston’s tight-knit stage commu­nity as “JJ,” is happy enough sharing the official motto of the troupe he founded, for which (as with his name) Classical Theatre Company invariably gets short­ened to “CTC.” But he’s happier to share what he calls the “more subversive” ver­sion.

“Boldly Re-Envisioning Classical Dra­ma,” he intones seriously, turning a bit theatrical without burlesquing himself. “That’s lifted from our mission state­ment, and it’s on every page of our web-site.” Johnston lets a small grin sneak in. “Still, if people are ready for a differ­ent approach, what we really like to tell them is — ‘New Plays Suck.’”

As founder and executive artistic di­rector of CTC, Johnston rides herd on Houston’s best shot at making “What’s old is new again” come alive onstage. After having the basic notion in late 2006, putting on a first reading at Bra­zos Bookstore in 2008, and then launch­ing the first season that fall, Johnston is clearly a guy who doesn’t mind swim­ming against the current. He’s also a guy who understands the ultimate theatrical paradox: in a city that generally embrac­es the new, the different, the weird, the avant garde, it just might take more guts to stage Shakespeare or Sophocles.

“We’re not ones to run our Shakespeare in doublets and hose,” he laughs, then gathers his focus to attack the challeng­ing issue of being true to plays without turning them into museum pieces. After all, they weren’t written to be museum pieces. “Whether it’s a wild take on something or just emphasizing a theme that’s not normally emphasized, we take old plays and give them a never-before­-seen quality. It’s a delicate balance, on a production-by-production basis. But everything always comes back to the script. That’s what’s existed for decades and centuries, and in some cases for mil­lennia. If you change the meaning of the words, then I think you change the play.”

In keeping with Classical Theatre’s in­spirations amid Johnston’s acting for the annual Houston Shakespeare Festival, the Bard gets to be front and center this month. With the company’s latest resi­dent actor, local favorite Philip Lehl, in the pivotal role of Prospero, CTC is pre­senting “The Tempest” at the Obsidian Art Space.

On the eve of the company’s fifth season, marked by an autumn move to a space shared with fellow upstarts Stark Naked Theatre and Mildred’s Umbrella, “The Tempest” should prove a meaningful re­minder of how the adventure began.

A native of Houston, schooled as an ac­tor in Boston, Washington, D.C., and New York City, Johnston found himself home in Houston due to “one of those life events, something that wasn’t part of my original plan.” Seeing his home­town through fresh eyes, he realized that while D.C. (for instance) has four companies devoted to the classics, the much-larger Houston had none. Nei­ther, it turned out, did the entire state of Texas. And neither did the entire region. In a casual way, Johnston vowed to think about starting such a company someday, presumably when “this acting thing” started to wind down.

A conversation at a Christmas party, however, unexpectedly led to some start-up funding, which in time led the Classical Theatre Company into a three-year incubator program called MODE, overseen by the Houston Arts Alliance. Johnston and friends staged a reading at Brazos — a “lost play” called “Love’s Last Shift” — followed a few months later by a more official debut. “Shylock, or the Jew of Venice,” a two-man drama starring Thomas Prior and David Wald, transported Shakespeare’s “Merchant of Venice” into a Nazi concentration camp. The story was pared down, obviously, with the impact striking many as freshly distilled, profound, even breathtaking. What’s old, audiences at that first pro­duction realized, could indeed benew again.

Over the years since, the Bard has enjoyed his fair share of the CTC lime­light (along with Aeschylus, Sophocles, Moliere, Chekhov, Ibsen and Shaw), at times forcing Johnston to ponder how far his plays have traveled from the Shakespeare Festival.

As both an actor and a director, he knows it’s all about the space. The huge stage of Miller Outdoor, separated from even the closest audience members by a 25-foot-wide orchestra pit, demands that actors move and speak for people seated a very long way away. Even with the mandatory wireless microphones, this makes for theater that’s more about proclamation than connection. While remaining a huge fan of “Doc” Sidney Berger and the festival he founded, Johnson believes CTC can do things with these great tragedies, comedies and histories that no one else in town is even trying to do.

“In just two weeks, the Festival has big­ger audiences than some companies in Houston see in a whole year,” Johnston observes. “But theatrically that can be a profound challenge. You already have a barrier with the elevated language. And you have the barrier that, in popu­lar culture today, going to a play is not something a lot of people do, or think of doing. What I want to do is remove as many barriers as possible. Breaking all that stuff down and making sure the audience is in the play is so important.”

To date, Classical has done what most start-up theater groups do – taken its productions from rented space to rented space. Johnston offers that, to his amaze­ment, it will ultimately be more afford­able to split the year-round cost of the new Studio 101 at Spring Street three ways than for CTC to rent rehearsal and performance space for only its three shows a year. That venue change is due to begin this fall, when the company’s budgetary planning has time to catch up with the shared opportunity. CTC’s ad­ministrative offices will follow in time, once the MODE arrangement has been fulfilled.

“I’d love this to be recognized as one of the top handful of theater companies in this city,” says Johnston, who also teach­es arts administration at University of Houston-Downtown and directs many of the CTC productions, including this month’s “Tempest.” “We’ve made a lot of headway in a short amount of time. I want the classics to be hip, and hip is different. We are different. We’re not just reinventing the wheel — we’re going back to the original wheel.”