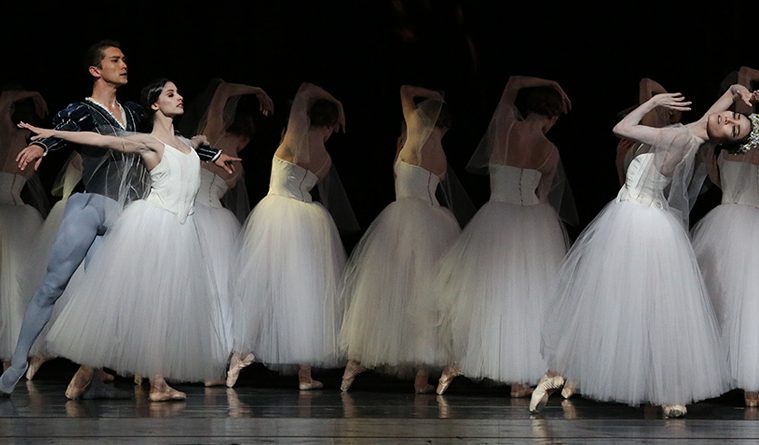 When Worlds Collide: Houston Ballet’s new Giselle overlaps the worldly and the ethereal 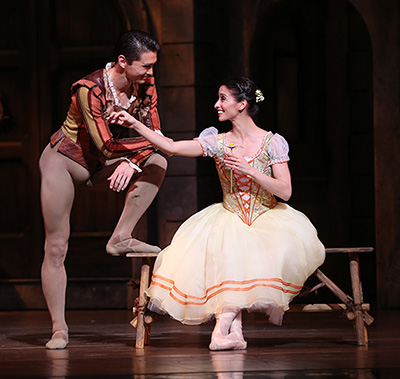 The ballet canon offers escape into other worlds and Giselle, set in Renaissance Germany, is no exception; but it’s not just to Germany we go. This ballet takes us to “the other side” — the world of the dead, where merciless spirits in white float magically in a dark forest, their immateriality evident.

In traditional versions of Giselle, the worlds of the living and the dead are separated by an intermission, each confined to its own act. In Houston Ballet’s brand new version, at Wortham Theater Center by Artistic Director Stanton Welch, the worldly and the ethereal overlap to come full circle.

Welch’s opening to Act I hints at what’s to come. The ominous spirits — physical representations of the souls of girls who have died of broken hearts, known as the Wilis — are watching the village where Giselle lives, preparing for the naive girl’s imminent demise.

In the first act, we’re introduced to the love triangle that will carry on into the otherworldly realm. Shy peasant girl Giselle (danced by Karina Gonzalez June 11) and the noble Albrecht (Charles-Louis Yoshiyama) are in love, while Hilarion (Christopher Coomer) pines for Giselle from a distance. Once Hilarion discovers Albrecht is merely posing as a villager, he decides revealing the truth will be his opportunity to win over Giselle.

As Giselle, Gonzalez embodied the girlish innocence that presents itself musically in Adolphe Adam’s sweet 19th century score and Jean Coralli and Jules Perrot’s classic choreography. She floated through the signature one-legged hops en pointe that feature in one of her solos, smiling while she traveled across the stage as though saying, “Isn’t life grand?” Her mother has a concern, though: Giselle’s heart is weak, and she is constantly trying to dissuade her from dancing too fervently. But what’s a girl in love to do? On June 12, Sara Webb’s lightness added an effervescence in the first act, and a dreamy weightlessness in the second act. 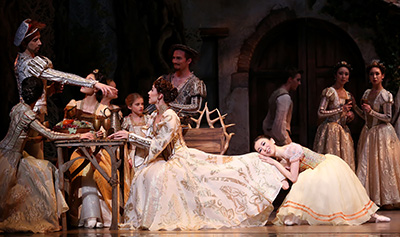 The dancing is enhanced by the lush costumes and sets by Italian designer Roberta Guidi di Bagno (who recently designed the sets and costumes for Houston Ballet’s new Romeo and Juliet). The charming village is on the outskirts of a deep, dark forest.

Giselle’s “Mad Scene,” as it’s called in the ballet world, concludes the first act. After Hilarion shows her who Albrecht really is — a nobleman engaged to the duke’s daughter — she goes insane, at first threatening to kill herself with Albrecht’s royal sword, then, finally, dancing herself to death. Gonzalez’s frenzied ramp-up to Giselle’s last breath was emotional.

One of the most challenging aspects of performing the role of Giselle is the character shift that happens from the first act to the second. When Giselle rises from her grave at the will of Myrtha, Queen of the Wilis (danced by an exacting Soo Youn Cho), she’s calm and collected. She’s accepted her fate; that nervous energy and excitement about the future is gone. Gonzalez’s transformation from a giddy villager to a cool spirit was remarkable, and her dancing even more so. She seemed to hang in the air with every balance, the white tulle of her ankle-length skirt floating delicately after her. Taking over the role on June 12, Jessica Collado showed a fierce determination and a mastery of Myrtha’s calm but demanding demeanor.

Lisa J. Pinkham’s lighting design was crucial for Act II. The dark forest is punctuated by ghostly-green and blue sparkling lights that glow when the Wilis first appear, whether they’re illuminated within the trunks of trees or further into the depths of the forest. 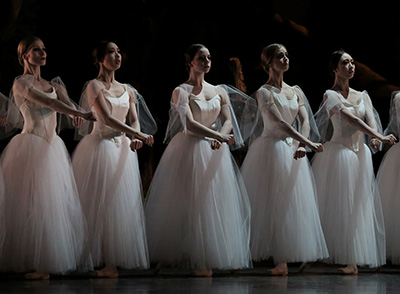 Much of the male roles’ toughest dancing comes in Act II when the Wilis confront Hilarion and Albrecht. Hilarion ultimately succumbs to his death, while Albrecht (with Giselle’s help) makes it to dawn and is thus spared. As Albrecht, Yoshiyama performed several series of continual jumps and leaps, becoming more desperate with each passing minute.

Albrecht’s apparent regret doesn’t deter Mrytha. As Queen of the Wilis, Cho imparted that no-nonsense, unforgiving attitude excellently through her steely dancing. You’d call her ferocious, except she’s so unfeeling at the same time.

The icing on the cake at the June 11 show was the announcement from the stage after the cast took their bows that Yoshiyama was being promoted to principal dancer. The news was clearly a surprise to Yoshiyama, whose expression of pure joy and gratitude emanated out to the audience. Houston Ballet’s dancers give so much of themselves in story ballets like Giselle; it was fantastic to see such wonderful artistry recognized.