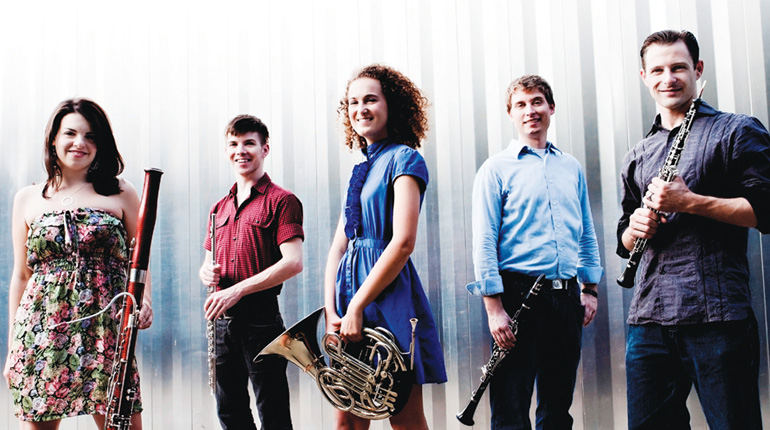 There’s nary a music stand in sight when woodwind quintet, WindSync, swaggers street-gang-style to tunes from Bernstein’s West Side Story or adorably masks as woodland denizens for a whimsical rendition of Prokofiev’s Peter and the Wolf. Whether they’re costumed and mischievously peeking from behind fanciful sets, or smartly perched at the stage edge in chic, after-five attire, WindSync’s true gold-mine is a seemingly boundless repertoire that encompasses works as diverse as John Williams’s soaring Harry Potter theme, the world premiere commission of Garett Schumann’s The Ballad of Robin Hood, and woodwind aficionado delights like Paquito D’Rivera’s Aires tropicales.

This month, WindSync returns home from a two month transcontinental mega-tour (Houston to Los Angeles and Vancouver to Staten Island) to top off their season with Homeward Bound, a concert featuring the music of American composers and songwriters including Aaron Copland, Eric Ewazen, Billy Joel, and David Maslanka.

The quintet’s Herculean work ethic exemplifies Houston’s unrivaled 21st century entrepreneurial spirit and good ol’ fashioned cowboy go-get-’em. In short, WindSync makes it happen, and they do so with charming bravado to boot.

Tracy Jacobson, founder of WindSync, bassoonist, and community arts engagement maven, joins forces with Garrett Hudson, (flute) Kerry Hughes, (oboe) Ben Haeuser, (clarinet), and Anni Hochhalter (French horn) to share creative and interactive performances with audiences of all ages. Jacobson launched the group in 2009 as a senior at Rice University’s Shepherd School of Music, and she isn’t shy about her ambitions for WindSync.

“I’ve always been one for making my own opportunities, so essentially I went around to my friends and colleagues and asked them about joining this rebel woodwind quintet, and lucked out with some fantastic musicians,” Jacobson says, adding, “We wanted to be famous rock-star classical musicians! Our challenge was how to accomplish it.”

For Jacobson and her crew, the rebellious road to classical musician rock-stardom is paved with a dedication to audience engagement and community building that sets the group apart. No one can possibly accuse the quintet of being all hat and no cattle, what with their inventiveness, grueling tour schedule, and unwavering dedication. WindSync played fifty concerts this season in Houston plus their grand North America tour, bringing their singular panache to museums, farmers’ markets, churches, schools, libraries, hospitals, cafés and concert halls. They are, unequivocally, bringin’ it to the people.

“We’ve carved a niche for ourselves as specialists in interactive concerts, that is to say, we incorporate bits of choreography, poetry, theater and singing into our performances, as well as audience participation,” says Jacobson. “We pretty much operate under the principle of playing only music we absolutely love and never program music just for the sake of it being standard or traditional. We also like performing in smaller, intimate and unconventional performance spaces. It lets our concerts take on a really casual and fun vibe.”

With their crackerjack musicianship and endearingly impertinent presentation style, they landed the enviable gig as Ensemble in Residence with the Da Camera of Houston Young Artist Program for 2011-12. The program offers professional development and career expansion opportunities to emerging instrumentalists, singers and composers, as well as fosters young artists’ life-long commitments to music-making in their communities and beyond.

Jacobson praises their Young Artist experience, “We have had the most fantastic year working with Da Camera. When we were considering auditioning in the fall, all we really had to do was read Da Camera’s mission statement to realize that it was really a perfect collaboration.”

As the quintet garners accolades like their year with Da Camera, additional artist residencies, and continued performance outreach with Young Audiences of Houston, their member’s careers are transitioning: WindSync is now a full-time ensemble. Rewarded for their adaptability, rock band attitude, personal flair, and a deep connection to audiences, they’re embracing the big change.

“One of the most amazing changes for me has been transitioning from a struggling student ensemble to a thriving full time professional ensemble. It’s just so fantastic to be able to shift your mindset from struggling, to gaining momentum, to hanging on for the ride as your career takes off! We are throwing out some radical ideas in terms of how classical music is presented, but it honestly seems to come quite naturally in the spaces we perform. When we bring our style into concert halls, it actually fits wonderfully, and we find audiences and fans right there with us. We think what’s most important for our future is that we remain flexible and adaptable as artists, while still working toward achieving our mission to enrich the lives of children, families, and community members through innovative, interactive chamber music. For us, the sky is the limit,” Jacobson effervesces.

Audacious, adventurous, interactive, cheeky, bounded only by big sky.  These are your neighborhood classical music rock-stars. What’s not to love?