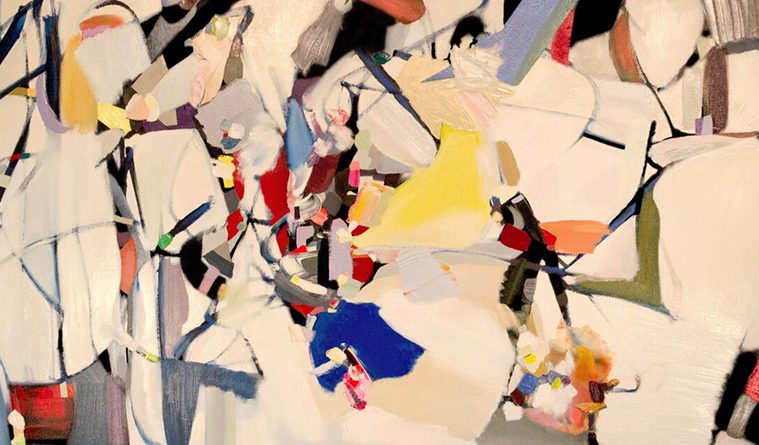 Wise with the Feeling 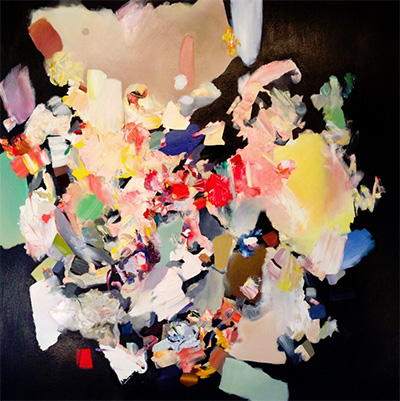 Trey Egan’s second solo exhibition at Cris Worley Fine Arts includes eight large-scale abstract oil paintings on canvas that animate and transform the white walls of the gallery into a torrential color storm. These works bring to mind more than just a few artists who pioneered painting in this expressive style and according to the press release “Egan employs the use of progressive trance and electronic beats as a means to channel a specific energy to his works.” This seems as clear a statement of the notion of synesthesia, utilized by many of the historical avant-gardists, specifically Kandinsky, as one could render.  Artists have long investigated the idea that feelings derived from, in this case sound, but also touch, vision, and vibration, could inform the creation of visual art.  For Egan the results clearly identify a masterful handling of the paint that fuses the motion and drive of lyrical abstraction with overlaid and still forms and shapes of defined instances of paint that bring to mind Hans Hofmann, or the mosaic paintings of Jean Paul Riopelle.

This work is not abstracted from reality in the way that some abstract painters start with particular objects or landscapes; rather, Egan refuses to begin with a plan, relying instead on, in his words, “an unconscious recognition of my surroundings, digesting and transferring this complexity into a cascade of recognizable but irrational space” in a process that begins with marks as a record of “natural movements.” Through this working method he then builds the deepest layers and energetic marks with an intuitive process that unfolds depending on responses and reactions to his immediate space. He finishes with the solid forms of thick paint and color that both punctuate and activate the surface of the final image. 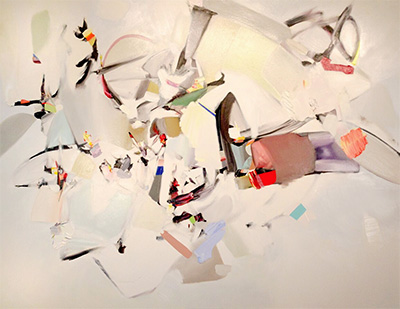 For the most part he seems to favor lighter colors in blended whites and grays that form the basal layers of the canvas on which he builds his compositions. This is evident in the wonderful Wanna Be Forevermore, 2015, where active swirls and marks curve and undulate outwards from a dense and chaotic center, itself full of color.  Egan here, and in other works, keeps the action mostly away from the edges, touching and contacting them on occasion, highlighting the distinction between what’s happening between them and the center and heightening the tension among the energetic elements on the surface. These choices also lend a depth to the overall composition through a blurry layering deep below the solid and thick elements of color, here few instances of blue, green, red, and orange, that come closest to the viewer and the surface.

By contrast, a completely different feeling is presented in Maya Levels, 2014, where Egan layers his oils over a black base. Darkness surrounds the bold painterly elements of condensed phrases of color and motion that also appear to float above the shadows like colors in space. The illusive nature of the abstract forms in this painting may suggest a reading of the title as representative of the Buddhist notion of maya (illusion) and how an external reality conceals another invisible spiritual one. Coming back to Kandinsky and a consideration of his investigation of the spiritual in his book Concerning the Spiritual in Art (1912) one could find additional correlations to rival systems and models that inspire abstract painting and its possible meanings.

Egan’s commitment to pure paint and abstraction testifies to the enduring survival and relevance of the style and medium.  With such early success at this stage of his career it would behoove admirers of current art to follow him with interest. This work does not turn to popular culture, mass media, or social circumstances for inspiration; instead, it brings humanism back into the conversation by starting with the unmediated and unconstructed self.