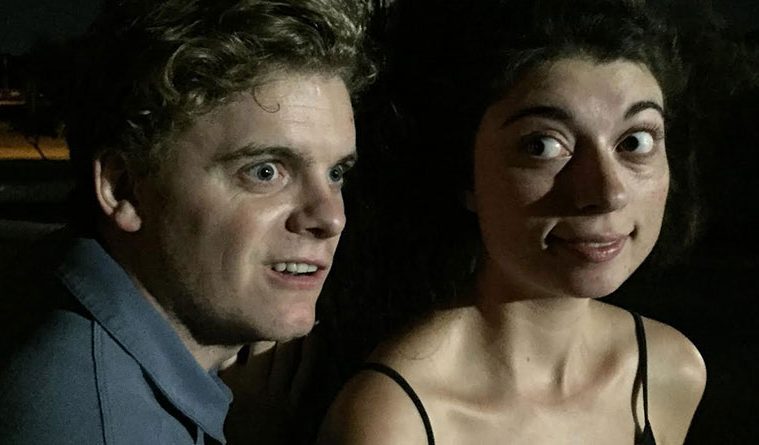 Matt Allan Holmes and Chandler Ryan in The Adventures of Flow and Greg by Briana Pozner – winner of Echo Theatre’s Big Shout Out New Play Contest.
Photo by Kateri Cale. 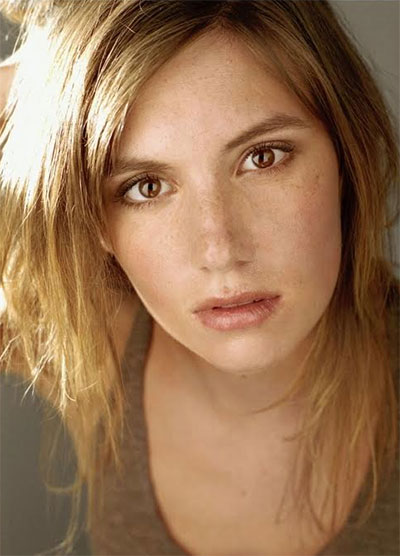 Go to live theater and chances are very good that women will be on stage, singing, dancing and acting. But behind the scenes, women are vastly underrepresented in technical creative production roles. Recent statistics show that women author less than 20% of the produced plays.

One Dallas theater group is helping to bridge the gender gap. Formed in 1998, Echo Theatre—named after the mythological nymph Echo, who was forced to repeat the words of others, never speaking for herself—only produces plays penned by women. And to help promote their mission, Echo sponsors a new play contest every year that attracts works from all across the country.

This year 85 entries were received, with the winning play, The Adventures of Flo and Greg by Briana Pozner of New York now being produced on the Echo stage through Sept. 26 at the Bath House Cultural Center.

Pozner spoke with A+C’s Dallas theater writer Scot C Hart about gender equality in the theater and her own creative process.

Recent studies have concluded that very few plays written by women get produced. In fact, women seem to be very underrepresented when it comes to the business of theater, except for maybe acting roles. But there are far fewer women in technical or production roles. Why do you think that is?

Yes, it’s a real problem. I’m an actor as well, and women are even underrepresented there. The problem runs pretty deep, and I would probably have to write about five pages to skim the surface of my thoughts on it. But one thing I saw in a recent article that disturbed me is that female artistic directors are often the ones that demonstrate more bias toward male playwrights. This is of course upsetting because you’d think that getting more women into positions of power might help even out the gender ratio all the way down the line, but it doesn’t seem to do that. I think one of the many problems is that women are often extremely hard on other women, and men may not have this problem quite as much with one another. I think it will likely take women uniting and standing up for one another to really chip away at this issue.

What will it take to shrink this gender gap in the theater?

I think it takes exactly what Echo Theatre has done. It takes people saying there is a problem here, and while we may not know what all the causes of it are we know it can’t continue this way so we will do our part to help shift things. It takes a great amount of consciousness from those creating theater and the insistence to not let themselves off the hook. 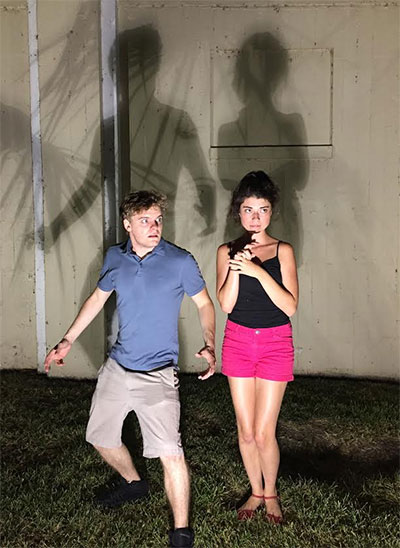 Matt Allan Holmes and Chandler Ryan in The Adventures of Flow and Greg by Briana Pozner – winner of Echo Theatre’s Big Shout Out New Play Contest.
Photo by Kateri Cale.

Tell us, who has inspired you to write plays?

I used to write plays all the time as a child. It was one of the very first things I naturally loved to spend my time doing. I stopped once I got to high school because I became pretty focused on acting and I think got more critical of my own work. So I guess, years later, my inner child inspired me to write again. I finally missed it so much that I just decided it was time.

How are you inspired to create characters and a plot? Do you base ideas on real life occurrences, or is it entirely from your imagination?

Honestly, I’m so new to writing that I don’t think there’s yet any kind of pattern as to what inspires me. This story definitely came pretty purely from my imagination, but was also inspired by my own interest in how our society perceives mental illness. And though the characters are both fictional, I definitely drew from my own weird neuroses and the neuroses of someone close to me when I created them.

How did The Adventures of Flo and Greg  initiate? This is your first play to be produced.

The Adventures of Flo and Greg is the first play I’ve written since the age of about eight! So it’s pretty much the first play I’ve written. I had been working on writing a book about mental illness for a little over a year and was really struggling to stay motivated, but I also knew the ideas in it were extremely important to me. Then one night while I was trying to brainstorm for the book, the idea of the plot of the play popped up. I got so excited by it that I began to build off of it in my mind and then began writing it.

The first draft I wrote had a lot more exposition in it and the ending wasn’t yet developed. I had a very casual reading of it in my apartment with my closest friends and they were tremendously helpful. I then had a more formal reading at the Flea Theater in New York City months later and that was also very helpful in figuring out what areas of it weren’t yet clear. I imagine my experience with Echo might prove to be the most helpful because it’ll be the first time I really get to see it on its feet.

Once a play is brought to stage via directors and actors, it tends to take on a new dimension. What’s that like for you as the writer, the originator, when it’s being taken over by other people? Do you feel sad, elated, scared?

All of those things. It’s of course sad, because up to that point the play has only belonged to me and there’s a comfort in that. It’s also joyous because the play is being shared and that’s truly why I created it in the first place. And it’s scary because the play is something that is both so my own and not mine at all and I’m watching it expand and change in way I never would have anticipated. I imagine it’s about a fraction of what a parent must feel like after their child goes to college.

What’s the most important thing you’ve discovered about yourself as a writer?

The most important thing that I’ve discovered about myself as a writer is that I am one. I think I was (and in some ways still am) averse to letting myself actually think of myself as a writer. There’s something about that title that makes me feel like I better know what the hell I’m doing. It’s okay to call yourself a writer and not know what you will write next and not even know if it will be any good. I’m starting to be more and more okay with that.