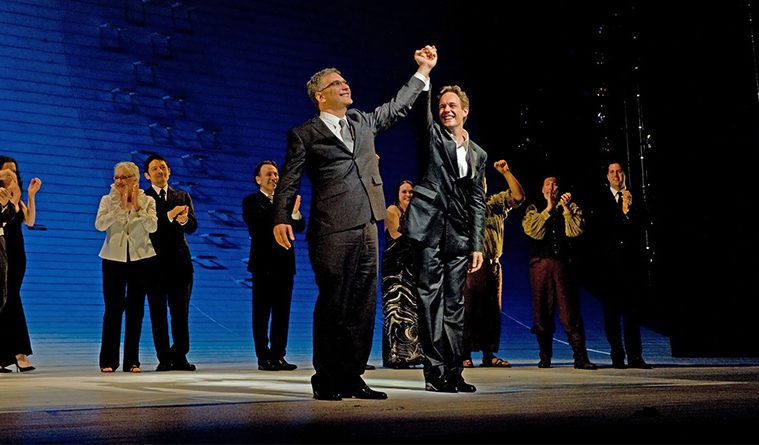 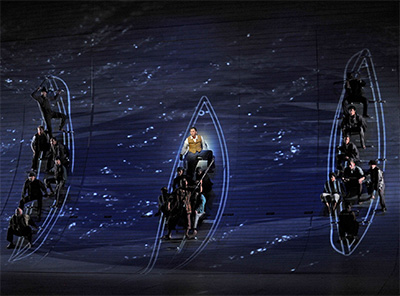 Morgan Smith as “Starbuck” and the crew of the Pequod. Photo by Karen Almond, Dallas Opera.

In 2010, Dallas Opera sailed into its inaugural season at the brand new Winspear Opera House with the world premiere of Moby-Dick, a new opera with score by Jake Heggie and a libretto by Gene Scheer. Every year since then, the whale of an operatic tale has been produced nationally and internationally. This November, Moby-Dick journeys safely back to its home port, as the Dallas Opera once again flies the doomed ship Pequod’s colors. Yet no sooner will the musical seas quiet in Dallas when Houston Grand Opera will let fly (on angel’s wings) a world premiere Heggie and Scheer opera of its own, It’s a Wonderful Life.

At first glance, the two operas’ source material, Herman Melville’s great American novel and Frank Capra’s classic holiday film, couldn’t seem less alike, but when I recently spoke to Heggie and Scheer about bringing the operas to Texas, they both noted that Moby’s narrator Ishmael and Wonderful Life’s George Bailey share certain operatic inner conflicts, that in vastly different settings both men gaze into dark waters with death on their minds.

“While they’re very different, these stories are both about people who are very lost, who somehow through the course of the actions of the pieces become found and find a different way of looking at the world,” says Scheer, with Heggie adding that both tell the story of a man on a voyage to find his “place in the world and a quest for identity. Where do I belong? Do I belong?” 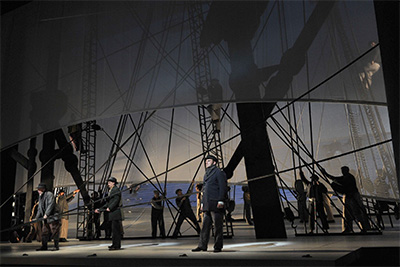 Morgan Smith as “Starbuck” and the crew of the Pequod. Photo by Karen Almond, Dallas Opera.

For Moby-Dick, that meant cutting all the scenes Melville set ashore and confining the story to the ship at sea. Ishmael has not yet become the narrator of this story and so is called Greenhorn. Heggie hopes the music gives the audience a sense of place and fills in everything that Greenhorn is not yet ready to tell.

It’s a Wonderful Life came with its own set of problems, since, as Scheer acknowledged, while people know the story of Moby-Dick, not as many people have actually read the whole novel, yet practically everyone has seen Wonderful Life and knows its scenes by heart.

HGO approached Heggie to compose an opera as part of its annual holiday series. “I tried to think: what’s a story that’s beloved, that people return to year after year, that at its heart is operatic, but that hasn’t been explored in this medium. It’s a Wonderful Life popped into my head,” described Heggie.

Once the idea took flight in Heggie’s mind, one of the main challenges became how to “reinvent” the story for the opera stage while still “honoring” the film. As Scheer explained, “The idea was to create something inherently theatrical, something that is theater-based not cinema-based.”

Heggie credits Scheer for “coming through with a couple of really magical breakthroughs that would make it a stage piece, and things that aren’t in the film at all that really are about the stage and our way of telling that story.” 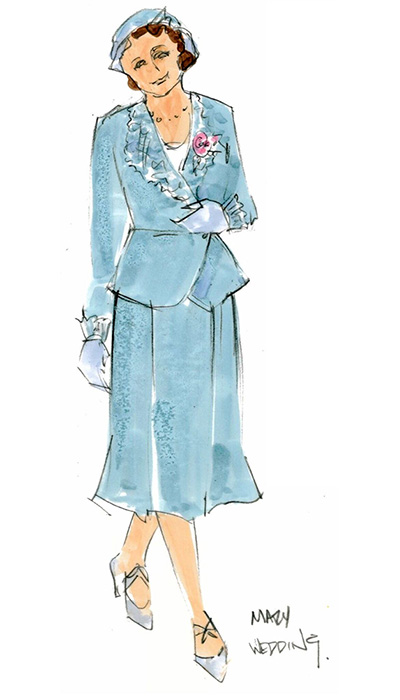 Some of those breakthroughs came in the form of an angel, an angel in a different guise from the film. From a musical perspective Heggie had already decided Clarence should become Clara. Starting with George Bailey as a tenor, it made musical sense to make his guardian angel a soprano. With that change in mind, Scheer discovered theatrical ways to give Clara a greater active role in the storytelling. While to disclose much more would ruin several surprises, audiences can expect the same characters but with a uniquely theatrical journey to that beloved happy ending.

Since on some level both Moby–Dick and Wonderful Life wrestle with ideas of community ties, it’s somewhat poetic that so many of the same artists help Heggie and Scheer create these worlds. Stephen Costello as Greenhorn and Morgan Smith as Starbuck return to Dallas for the roles they originated, while the original 2010 Pip (Talise Trevigne) and Stubb (Robert Orth) play Wonderful Life’s Clara and Mr. Potter. Moby Dick’s set and projection designers Robert Brill and Elaine J. McCarthy return to the Heggie and Scheer fold with Wonderful Life. And HGO’s artistic and music director, Patrick Summers, will conduct It’s a Wonderful Life, his sixth world premiere with Heggie, including Moby-Dick.

“Once you find a real artistic and collaborative soul mate, you tend to stay with that person because you see eye to eye and really focus on the work. It’s not about a personality. There’s an unspoken communication and language,” said Heggie of his collaboration with Summers.

Scheer echoes this sentiment when it comes to It’s a Wonderful Life director,

Leonard Foglia, the original director of Moby-Dick. “We have shorthand at this point. I’ve done a number of pieces with Lenny, who has always been a sounding board for me and Jake as we’re writing the piece. You can’t write by committee, but you do need an editor, someone you can bounce ideas off of whom you trust.” 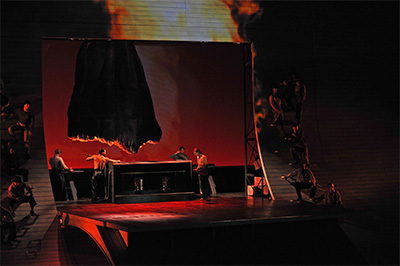 Sailors rending the whale blubber into whale oil, on board the Pequod, Dallas Opera production of Moby-Dick, 2010. Photo by Karen Almond, Dallas Opera.

Neither Heggie nor Scheer seem to take for granted this rather rare operatic occurrence, a revival returning to its home port and a world premiere production happening at two renowned companies a month and few hundred miles apart.

“We hoped we had created something of enduring value when we wrote the piece,” says Scheer of bringing Moby-Dick home. “You just never know until the downbeat is given and the piece starts playing and you see how people respond to it.”

Heggie meanwhile can’t help but use a word from the title of his newest work to describe this epic Texas endeavor: “It’s wonderful.”