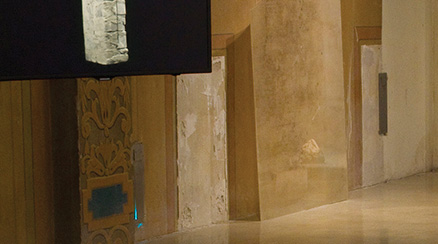 Only time will tell how November’s merger between the Austin Museum of Art and Arthouse will play out. In the meantime, health it’s nice to see that the Texas Prize —  a formerly biennial, order now triennial $30,000 award Arthouse launched in 2005 for emerging visual artists — has survived the wedding of two former rivals for Austin’s philanthropic dollars.

Also encouraging: This year’s winner, Austin artist Jeff Williams, and fellow finalists Jamal Cyrus and Will Henry of Houston all present strong bodies of work in the celebratory exhibition Texas Prize. Their offerings have room to breathe, thanks to the museum’s decision to give fewer finalists more space to exhibit than in previous iterations.

The show confirms the impression that the jurors — an international panel that included museum directors, curators and artist Katrina Moorhead, the 2007 recipient — picked the right winner in Williams, while all three deserved to be in the running.

In the downstairs gallery, Henry presents a group of mostly nocturnal landscape paintings that take into account how artists as different from one another as Frederic Remington and Ed Ruscha have influenced how we see the West, while Minimalists such as Donald Judd and Dan Flavin have transformed how visitors and locals experience it thanks to Marfa’s Chinati Foundation, a pilgrimage site for international art tourists.

A campfire glows against a Remington-like night sky in Installation, but it’s lit by the kind of fluorescent light tubes Flavin used. Giant calls to mind Ruscha’s paintings of the iconic Hollywood sign, but in Henry’s painting the letters spell out “Judd” instead. And there’s a touch of Magritte in Southwestern Landscape, which features three tumbleweeds levitating over a flat, barren vista.

Upstairs, Cyrus presents an installation that revamps a musical stage with conceptual touches related to African-American consciousness and history. The set includes towers of animal-skin drums and a breaded saxophone next to a deep-fryer — a remnant of Texas Fried Tenor, Cyrus’ opening-night performance in which he deep-fried a saxophone, nodding as much to John Cage as to the history of jazz.

The sax sizzles to perfection in the nearby video of Texas Fried Tenor, which must have been hoot to attend. In related public programs, Cyrus will also perform at the Eric Dolphy Memorial Barbecue at 5:30 p.m. June 29 at Houston’s Project Row Houses and will present a free jazz performance, Ancestors, at 7 p.m. at The Jones Center.

Williams’ installation, which jurors praised “for the way in which it addressed the complex geographical and architectural history of the exhibition site and used an inventive sculptural approach to mark intersecting and distinct measures of time,” is hauntingly strange. Plexiglas sheets, each supported by wooden beams lying on the gallery floor, sag under Central Texas fossils sitting in puddles of a chemical solution.

Suspended above, videos screen rotating pieces of the masonry from the old, pre-renovation Jones Center. Meanwhile, an interior wall dividing Williams’ half of the gallery from Cyrus’, has sacs that appear to be in a state of suspended flow.

In fact, they’re slowing dripping down the wall, reflecting Williams’ interest in gravity and decay, and the installation will gradually change between repeat visits. Even if you only catch it once, though, Williams’ laboratory of post-Minimalist curiosities will heighten your awareness of how even seemingly static objects like buildings are constantly breaking down over time.

While you’re in Austin, stop by the Blanton Museum of Art, whose collection of 17,000 artworks is the largest in Central Texas and is now searchable online thanks to a new database accessible at collection.
For more info: blantonmuseum.org.

Upcoming Blanton exhibitions include The Collecting Impulse: Fifty Works from Dorothy and Herbert Vogel (June 10–Aug. 12), which celebrates a gift from the celebrated collectors of modest means made famous by the documentary Herb & Dorothy. The show includes works by such artists as Sylvia Plimack Mangold, Elizabeth Murray, Lynda Benglis, Ursula von Rydingsvard and Richard Tuttle.

Texas Prize
AMOA-Arthouse at The Jones Center
May 5–July 22
www.amoa-arthouse.org