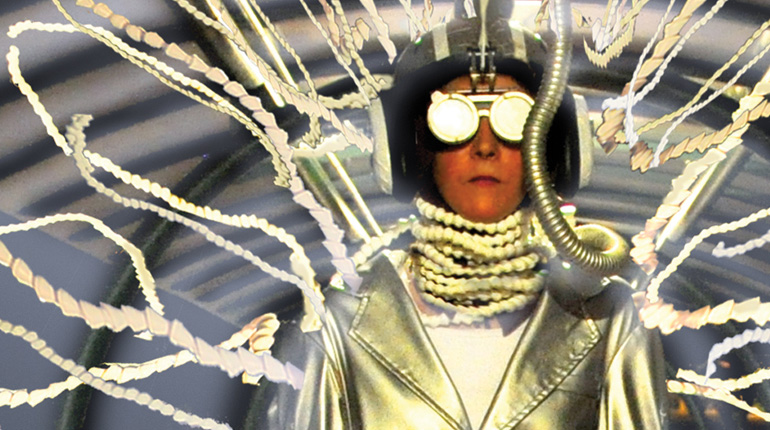 New Mexico is known for artists and scientists, viagra 100mg not just green chiles and hot air balloons. Georgia O’Keeffe may never have hob-nobbed in Los Alamos with J. Robert Oppenheimer, but her paintings and his work with the Manhattan Project certainly changed the way the state was perceived by the rest of the world. Today, according to Frank Ragano, one of the co-founders of the Santa Fe International New Media Festival, there is a perfect blending of science with the visual arts, thanks to new technologies.

New Media is the term that encompasses video art, multimedia performance, web gaming, and interactive installations.  The 2012 Festival in Santa Fe ( June 22 – July 8 ) brings together over seventy leading artists from eight countries.  Thirteen states will be represented in this year’s show.

Houston artists, Hillerbrand+Magsamen were selected to participate in the Santa Fe event. They are a married couple who create experimental videos and installation projects based on their family life, often including their two children. One of their acclaimed projects, Elevated Landscape, was shot on location at the Lawndale Art Center and explores the idea of a suburban lawn as a metaphor for a couple controlling their space.  Transcendental Smoothie, was another installation that included giant balloons on which images were projected of their children cutting out cookies. Their intention was to comment on how we form our children’s identities and struggle with our own.

The Festival is held on several sites, including a 35,000 sq. ft. space at El Museo Cultural de Santa Fe. “The goal is to create an immersive environment,” Ragano said, “a space where attendees can wander in a unique atmosphere of light, sound and image.  It’s also a showcase for New Media talent,” he said.  Evening presentations will include a demonstration in which scientists from Los Alamos Nuclear Laboratories will show how they are using 3D projections to help fellow scientists wrap their minds around concepts which include vast amounts of data. All events and entrance to the installations are free.

“We don’t have a problem entertaining people,” said Maiannah Amster, the Festival’s other co-founder along with Ragano. “We’re looking for work that is strong, whether it’s playful, profound, or both,” she said. Some of the latest technology includes interactivity, which artists have “stolen” from Xbox and Wii, the video games which introduced sensors that would pick up on the movement of players and respond accordingly.

“Of course, the technology is always changing,” she said. “This year we noticed that several artists were presenting an aesthetic that simplifies things, taking images back to the idea of drawing lines on paper, old-fashioned as that sounds….  Others are creating work in real time, creating images that exist only in the moment.”  While she admits that some conceptual art leaves her cold, Amster assures, “We’re always into beauty.”

Another Texas artist, David Stout, teaches at UNT Denton and will present an installation, Shadow Box Attractions as well as a performance by Noisefold, an ongoing collaboration with Cory Metcalf.  Working with a live cellist, Frances Marie Uitti, Noisefold promises tha their work will combine cinema, data sonification, and acoustic music as an integral whole. Noisefold seeks to reinvent the laptop performance as an embodied dramatic form.

Last year’s festival drew approximately four thousand people, according to Ragano, and with its international focus and expanded venues, this year’s event promises to be even more popular. “The work is really high quality and very diverse. An outreach program involved students at schools in Santa Fe, Albuquerque, and the Navajo Nation, who will present their work,” he said. “We showed them some of the works from our previous festival to show them what was possible, and they got very excited.”

“Our name is getting out there,” Ragano said. “We’re trying to create an internationally known New Media Festival in Santa Fe. People say this could be at MOMA.”