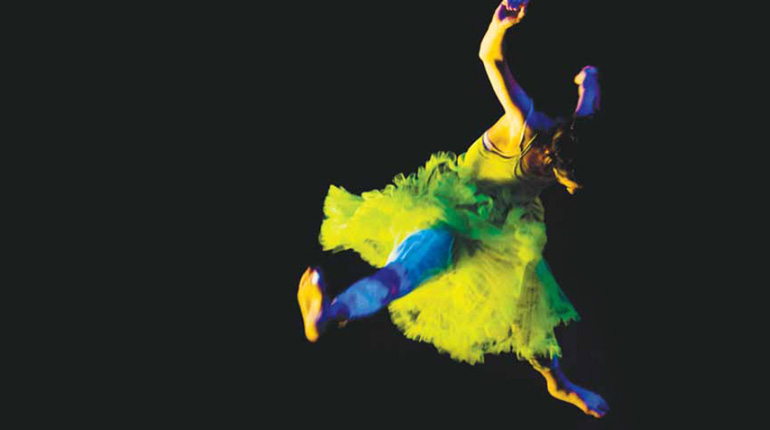 AS THE YEAR TURNS, view IT’S TIME to look back and look ahead. A+C writers chose their favorite performance of 2011 and look ahead to 2012.

2011 Having just moved to Houston, I began 2010 with many questions. Coincidentally, my answer to A+C’s question about last year’s best exhibition is “Answers to Questions,” John Wood and Paul Harrison’s survey show at the Contemporary Arts Museum, Houston.

2012 Leaving my first year as a Texas resident behind, I look forward to Yasufumi Nakamora’s exhibition “Utopia/Dystopia: Construction and Destruction in Photography and Collage,” on view at the Museum of Fine Arts, Houston from March 11–June 10, 2012.

2011 Everything about Classical Theatre Company’s production of George Bernard Shaw’s “Candida” was so well done. Shannon Emerick’s Candida was really lovely and subtle.

2011 The best thing about the Houston arts scene in 2011 has to be the opening of “Salon of Beauty” at the Rice Gallery, resplendent with bright, bold colors and a loving look at a neighborhood that manages to be beautiful amid its tattered edges.

2012 I’m looking forward to both “Anna Boleyna” at Opera in the Heights January 26–February 5, and “Mary Stuart” at Houston Grand Opera April 21–May 4, two parts of one of my favorite periods of history — drama, love, loyalty, betrayal, these two pieces have it all.

2011 Houston Ballet’s performance of Jorma Elo’s “ONE/end/ONE” was a stand out. Elo takes the language of ballet and manipulates it in surprising, delightful, and signature ways, and it’s a dialect in which Houston Ballet’s dancers proved fluent.

2012 I’m most looking forward to “Come Fly Away” at Gexa Energy’s Broadway Across America, April 10–15. Tharp plus Sinatra makes for comfort food, familiar but still makes my mouth water a little bit.

2011 “By a Committee of Style” presented by Leslie Scates and featuring powerhouse improvisation dance artists such as Nina Martin, Jordan Fuchs, Sarah Gamblin and Rebecca Bryant, was a showcase of daring work by dancers truly steeped in their practice.

2012 As part of their Dance Month, The Jewish Community Center presents the Gallim Dance Company on February 11, led by choreographer Andrea Miller, this company will undoubtedly be both visually and physically stunning; I am expecting a feast for the eyes and mind.

2011 The best exhibition for me was Walter De Maria’s “Trilogies” at The Menil Collection, the juxtaposition of clinical precision and billowing Americana romance proved to be the most moving show I’ve seen this year.

2012 I’m looking forward to the culmination of Lawndale’s residency program in their 2012 exhibition featuring their three current residents, Seth Mittag, David Politzer and Anne J. Regan in May. I can’t wait to see how the artwork will evolve over the course of the residency.

2011 This year I was very impressed with a little movie called “The Debt,” a well-made thriller about Mossad agents tracking down a Nazi war criminal in East Berlin. Jessica Chastain and Helen Mirren were standouts.

2012 I’m most excited about “Skyfall,” the 23rd James Bond movie and the third with Daniel Craig. It will be the 50th anniversary of the Bond series and the pressure is on for director Sam Mendes.

2012 Following his infinitely creepy “The Skin I Live In,” Pedro Almodovar, arguably the best living Spanish director, announces his return to his most trusted genre-melodrama. “Mina” will chronicle the life on Italian singer Mina and her private and public battles in stardom.

2011 “Steamrolled” at Gallery M Squared (July 11–12) from Print Matters, which exhibited giant relief prints from over 30 artists all pressed by a steamroller at the one-day “Rockin’ Rollin’ Prints” event in June.

2012 In “Identified and Objectified: A Study of the Ephemeral” at Box 13 Artspace, Shannon Duncan, Britney Connelly and Bryan Forrester explore the effect of objects on identity and memory through photographic media, albeit with different objectives: finding a true self, connecting with others, or gaining closure with the past.

2011 Without a doubt, my favorite performance in 2011 was Houston Grand Opera’s production of Benjamin Britten’s “Peter Grimes.” I rearranged my schedule to see a second performance of this production, something I had never done.

2012 I’m looking forward to hearing the luscious sounds of soprano Karol Bennett in the River Oaks Chamber Orchestra’s premiere of “Maternity — Women’s Voices Through the Ages,” with music by Anthony Brandt and libretto by David Eagleman on April 21.

2011 American Festival for the Arts’ Finale Conservatory Orchestra Concert truly spoke to their mission, as these young phenomenons pulled out the power and details in each orchestral piece, including Prokofiev’s prolific “Romeo and Juliet” suite.

2012 Da Camera’s “Rites of Spring,” featuring The Bad Plus On Sacred Ground on May 5 is at the top of my list. This dynamic trio explores the masterpiece that set the classical music world on fire in 1913 with a dynamic rescoring of “The Rite of Spring” for piano, drums, and bass.

2011 Marc Bamuthi Joseph’s “Red, Black & GREEN: a blues” at University of Houston Cynthia Woods Mitchell Center for the Arts was one of the most original performances I have ever seen. Bamuthi Joseph engineers an entirely different way for audiences to perceive his work, allowing the full power of his message to come through.

2012 As a Tom Stoppard maniac, I can barely contain my excitement to see Main Street Theater’s production of the Stoppard trilogy, “The Coast of Utopia,” beginning January 12, only the second production in the U.S. Stoppard’s magnificent trilogy chronicles a group of real-life Russian intellectuals chafing under an oppressive regime and dreaming of revolution.