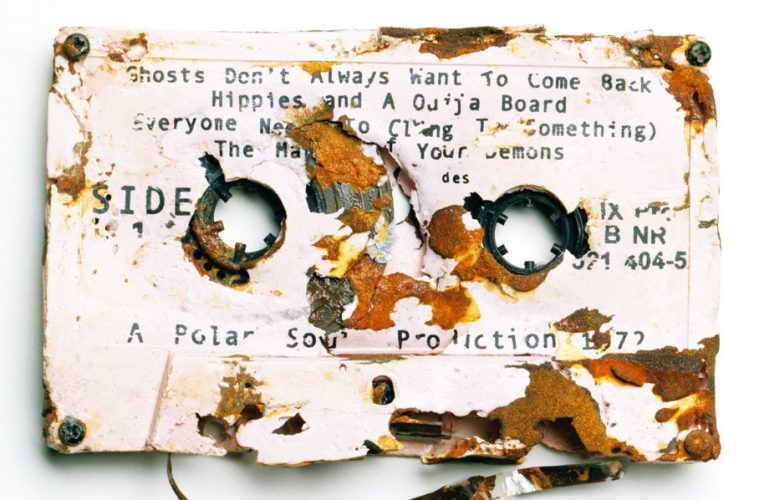 IMAGE: Dario Robleto, At War With the Entropy of Nature / Ghosts Don’t Always Want to Come Back (detail), 2002. Cassette: carved bone and bone dust from every bone in the body, trinitite, (glass produced during the first atomic test explosion, circa 1945 from Trinity test site, when heat from blast melted surrounding sand), metal screws, rust, typeset. Audio tape: an original composition of military drum marches, various weapon fire and soldiers’ voices from battlefields of various wars made from E.V.P. recordings (Electronic Voice Phenomena: voices and sounds of the dead or past, detected through magnetic audiotape)

Forbes is totally on board with the Wu-Tang Clan’s plan to release just one copy of its next album–and with the art-market strategies behind the move:

Like the work of a master Impressionist, it will truly be one-of-a-kind—-in lieu of a traditional major label or independent launch, the iconic hip-hop collective will make and sell just one copy of the album. And similar to a Monet or a Degas, the price tag will be a multimillion-dollar figure.

“We’re about to sell an album like nobody else sold it before,” says Robert “RZA” Diggs, the first Wu-Tang member to speak on record about Once Upon A Time In Shaolin, in an exclusive interview with FORBES. “We’re about to put out a piece of art like nobody else has done in the history of [modern] music. We’re making a single-sale collector’s item. This is like somebody having the scepter of an Egyptian king.” …

As an interesting response to current music-industry conditions, and as an assertion of the artistic value of Wu-Tang’s music, I have no problem with the tactic. Here’s where I do have a problem:

According to RZA and the album’s main producer Tarik “Cilvaringz” Azzougarh, a Morocco-based part of Wu-Tang’s extended family, the plan is to first take Once Upon A Time In Shaolin on a “tour” through museums, galleries, festivals and the like. Just like a high-profile exhibit at a major institution, there will be a cost to attend, likely in the $30-$50 range.

Visitors will go through heavy security to ensure that recording devices aren’t smuggled in; as an extra precaution, they’ll likely have to listen to the 128-minute album’s 31 songs on headphones provided by the venue. As Cilvaringz puts it: “One leak of this thing nullifies the entire concept.”

Though no exhibition dates have been finalized, Cilvaringz says Wu-Tang has been in discussions with a bevy of possible locations, including the Tate Modern (a representative from the institution did not respond to a request for comment). Other venues, including art galleries and listening tents at music festivals, could eventually round out the tour. (emphasis added) 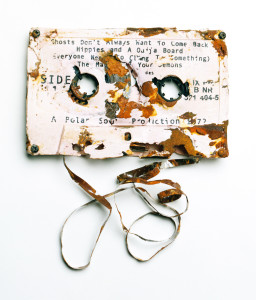 Dario Robleto, At War With the Entropy of Nature / Ghosts Don’t Always Want to Come Back, 2002

I wonder if any Texas art museums are among the “bevy of possible locations.” If so, they should encourage Wu-Tang to go the festival-tent route instead. My problem isn’t with the musicians’ desire to have their work considered in a museum setting; it’s with their desire to charge museumgoers even more than they’d pay to see the priciest Impressionist shows. And with their plan to impose more security restrictions than visitors face to spend time with masterpieces hundreds, even thousands of years old, and to put museums in the position of policing the band’s copyright. Which, if you think about it, undermines the band’s claim to the singularity of this release. If someone surreptitiously snaps a photo of a Pollock, that hardly “nullifies the entire concept.” Dario Robleto let Yo La Tengo use an image of his sculpture At War With the Entropy of Nature / Ghosts Don’t Always Want to Come Back (2002) on one of their album covers. Does that nullify the entire concept of his sculpture, or its value as an original artwork? 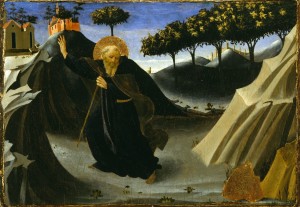 “The idea that music is art has been something we advocated for years,” RZA says in the Forbes story. “And yet its doesn’t receive the same treatment as art in the sense of the value of what it is, especially nowadays when it’s been devalued and diminished to almost the point that it has to be given away for free.”

Ah, but museums like the Menil Collection, Kimbell Art Museum, the Dallas Museum of Art, etc., are the places where we demonstrate the value of art precisely by giving away the chance to experience it in person. Even museums that have maintained the unfortunate practice of charging admission have free days, and their most high-priced special exhibitions are still more affordable that what Wu-Tang wants to charge. If Wu-Tang doesn’t value its art enough to give it away, a museum is the last place this tour should stop. Museum directors should take their cue on this one from Saint Anthony Abbot in Fra Angelico’s painting at the Museum of Fine Arts, Houston and shun whatever mass of gold Wu-Tang offers them. I’d recommend standing in front of the actual painting for inspiration, but it’s not on view. The MFAH removed it, along with most of its pre-1800 European collection, to make way for a $23-a-head Impressionist show.