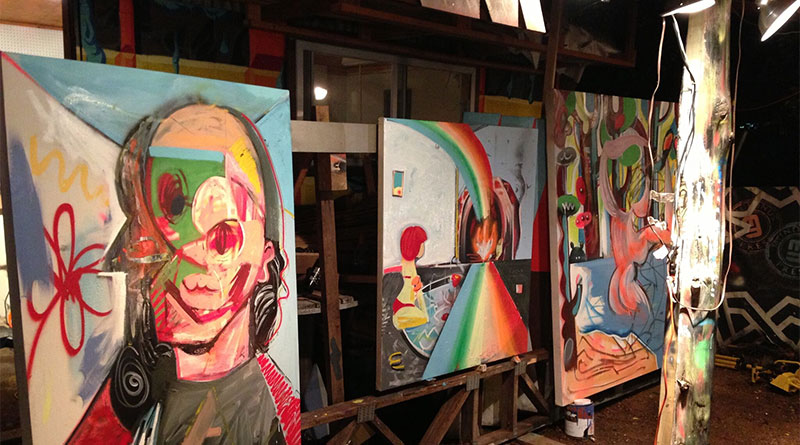 The old adage that “two heads are better than one” couldn’t be more true for Drew Liverman and Michael Ricioppo, a collaborative painting duo that makes maximalist abstract and figurative works that are saturated, bold, and frenetic. The duo, which calls their partnership “YOUNGSONS”, has been working together for almost 15 years. They met through mutual friends during college at Virginia Commonwealth University, went skateboarding together, became friends, formed a collective, and have been creating ever since.

Having four hands also helps, as the pair is tackling a very large-scale mural at Congress and East 8th Street in Austin during the first two weeks of May as part of their show “Live Free with Guys.” The show includes an exhibit of their paintings, assemblages, and collages in the storefront windows at 721 Congress Avenue—a Co-Lab Projects pop-up. The exhibition is part of the West Austin Studio Tour May 14-15 and 21-22 and will be on display at the pop-up space from Friday, May 13 through June 24.

“We wanted to do something in the public sphere that suggests freedom and recklessness,” Liverman says of the exhibition that will be on display 24-7. “We’ve done some public murals before, and each time we do a new one, the work seems to come out of the chaos of our current interests.”

The duo thrives on spontaneity, and their collaboration is loose. Oftentimes they start without a plan in mind, just free-flowing ideas. If they’re working on a canvas or collage, they pass it back and forth building on (and sometimes painting over) each other’s work.

“It’s like painting with another hand attached to another brain that you know pretty well,” says Liverman. “We try to let go of our personal filters and embrace a visual dialogue that comes out of chance. It’s pretty similar to a conversation.”

“Some of it is verbal and a lot of it really isn’t,” adds Ricioppo. “Maybe we’ll egg each other on a little. If you’re with a buddy, you’re going to do something more reckless than if you’re alone, even if you were just to go out partying. So there’s an element of play. We’ll push each other away from comfort zones into territory that you just can’t go alone.”

“We never really know what will happen until we start working. It’s like any collaborative effort, but we’re making a painting instead of making dinner,” explains Liverman. “Honestly, it’s surprising that it’s not a lot more common among artists.  Or maybe it’s not at all surprising since so much of art’s value revolves around the mythic individual genius.”

Both make their own work as solo artists as well. Liverman wrapped up a show of his paintings at Austin’s Farewell Books earlier this year. Ricioppo is a professional woodworker and metal fabricator who creates custom fixtures. But like in any successful collaboration, the team is greater than the sum of its parts, and they take advantage of their creative synergy.

“You’re getting lost in your own thing, and then you switch areas and you’re like, ‘Wow, somebody did all this stuff, made all these marks, filled all this in.’ You immediately know where to go,” says Ricioppo. “I think a lot of times with painting alone, if you’re trying to be loose and abstract and have an expressive style, it can get kind of tough. Somehow the jumping back and forth is like playing a sport together, it keeps it interesting, something is happening the whole time.”

Liverman and Ricioppo are like many collaborative duos; they have common interests, mutual friends, and shared memories, but their partnership poses some logistical challenges because the pair hasn’t lived in the same city since 2012. Ricioppo had been living in Santa Fe (and recently relocated to San Antonio), while Liverman’s home base is Austin. They’ve had to be intentional about making time to work together. Each meeting is a mini-reunion.

“It’s like meeting up with a friend to go fly fishing or whatever other guys do. We talk on FaceTime once in a while just to chat about life and art. We make plans to meet up, usually in Austin because I have a studio here with a big yard. We can spread out and work outside,” says Liverman. “I think we make the effort to keep it going because it seems so integral to our friendship.  We’ve both changed a lot over the years, both got married. There are still enough shared memories and vestiges of a shared language that things work pretty smooth and we still enjoy the process.”

Because of the distance, the pair is especially prolific when they do meet, going on creative benders at the rustic Monofonus studios. Their last meeting produced 20 collages and four large-scale paintings in less than a week. They often work into the wee hours, possessed by the night, energy, and immediacy of what they’re doing.

“You’re up at 4 a.m., you’re high, and you feel great. It’s about the space, it’s about being outside at night, and the mosquitoes, and friends coming by, and the imagery coming out of these paintings. We’re more interested in the activity than the preciousness of what we’ve done,” says Ricioppo.

It seems like the collaboration has always put more emphasis on the process and the time spent together than the outcome. That concept goes back to their college days, living together in a rented house and the first collective they created with two other housemates.

“We basically just hung out, made drawings, videos, zines, music, and Mike was writing plays,” Liverman recounts. “We would get a big pile of used books and magazines and sit at the kitchen table passing the collages back and forth as we worked on them. We were usually just talking about life, friends, books, movies, whatever.  The collages were just something to do while we hung out. The more we worked on them the more we became interested in the compositions, decisions, what worked and what didn’t.”

The obvious cohesiveness of their friendship bleeds onto the canvas.  There’s visual tension—almost competition in the work, and yet, like their shared history, the elements are woven so tightly, it’s not apparent that four hands and two brains were responsible. Any separation has dissolved into one identity.