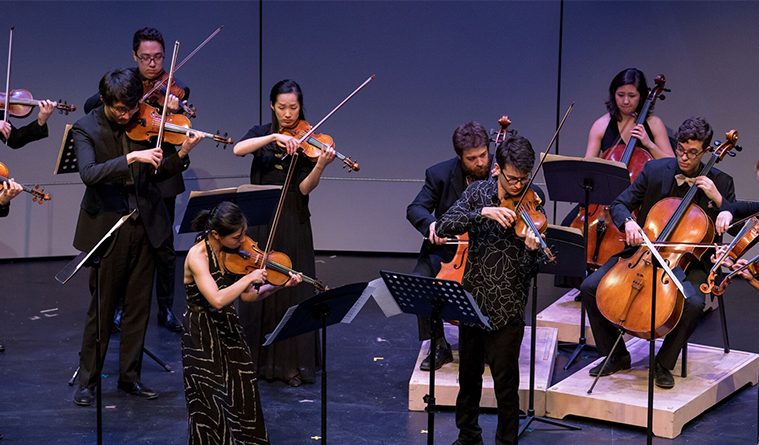 Youth, Talent & Energy: KINETIC concludes its season at the MATCH 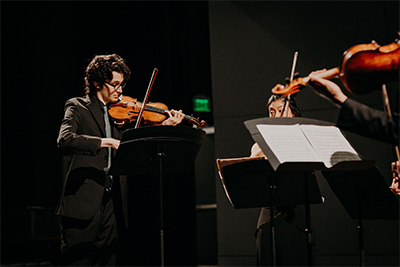 KINETIC, the conductorless ensemble directed by Natalie Lin, closes its third season with Musical Madness on May 6 at the MATCH with a program that includes works by Mozart, Carlo Gesualdo, Erkki-Sven Tuur, Osvaldo Golijov, Beethoven and the ensemble’s own Giancarlo Latta. A + C editor Nancy Wozny visited with Lin on all things KINETIC and this season’s big accomplishments.

It’s been a long time since I first interviewed you, since our “real” music writers took over the KINETIC beat. I wanted to touch base on KINETIC as you enter your fourth season next fall. When you look back over the past few years running an upstart music ensemble, what are you most proud of?

I’m incredibly proud of all that KINETIC has accomplished since we first launched in 2015. Looking back, it’s amazing to see how it has grown from just an idea that we tossed around among friends, to a real, thriving ensemble — it’s now its own living organism, complete with a distinct personality and presence in Houston. At first, it was exciting just to get off the ground and put on our first show. Now, we’re proud to say that we’ve successfully completed three concert seasons, and are eagerly looking ahead to our fourth.

I’m curious how the conductorless part has evolved over these few years.

The conductorless part about KINETIC is one thing that has remained consistent. It’s at the core of our ensemble’s identity, so it’s something that we completely embrace. Being a conductorless ensemble is more than just the fact that we don’t have someone waving a baton around in front of the group. For us, it represents a complete shift from a conservative, autocratic approach to playing music, to one that embraces collaboration, allows freedom for experimentation and individual expression, is intentional with the use of movement and body language, and cultivates a crazy amount of collective energy. The part that has evolved is how we make the conductorless model work. We’re constantly striving to improve our rehearsal strategies, through experimenting and tweaking, in order to optimize the collaborative process. 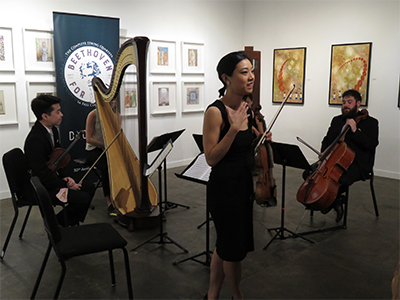 It feels like it’s been a big year for you, at least from where I stand, in the sheer number of times I have seen KINETIC on a Houston stage. In addition to your regular season, KINETIC has partnered with Musiqa and Open Dance Project for Musiqa’s opening, Da Camera Houston for Beethoven for All, St. Paul’s Methodist Church for the Lenten Series and Apollo Chamber Players for the closing of their season. How do you value those kinds of partnerships?

With collaboration already being one of our core tenets within the ensemble, seizing opportunities outside of KINETIC to collaborate with other ensembles and organizations has seemed only natural. That fact that we’ve enjoyed such a collaboration-rich season is, I think, a testament to the friendly and open creative community that we have in Houston. We are all so ready to team up and share projects, knowing that together, we are all making Houston a more culturally vibrant city.

I’ve really enjoyed your partnership with Kathrine Zeren. Not only do the men look smashing in her ties, but it’s always fun to do a little pre-show shopping! And the pop up at A 2nd Cup, which combined music, artisan shopping and lunch, was superb. Talk about that relationship.

Our partnership with Kathrine Zeren has been incredibly meaningful, and it has opened up even more ways that we’ve been able to plug into our local community. As a Houston startup, all of us in KINETIC wear so much Houston pride (figuratively and literally!), and partnering with and showcasing the work of other local creatives – whether they are fashion designers, ceramicists, makers of jewelry, or visual artists – is very important to us. I’ve also found that gathering creative people together gives us all a unique opportunity to learn from and be inspired by one another’s respective crafts. So, all around, it’s so beneficial!

Our “KINETIC & friends” pop up market at A 2nd Cup last month was the perfect meeting place for this. We had an artisan marketplace, curated by Kathrine, paired with a chamber music concert, curated and performed by KINETIC. A portion of the proceeds from this popup went toward A 2nd Cup’s cause to end human trafficking, so collectively, we were all able to support a humanitarian cause that deeply affects our city. 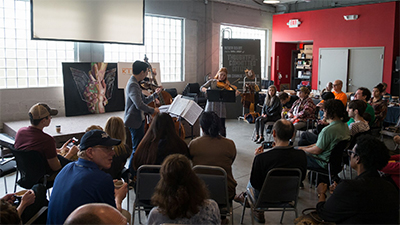 A string trio performing at “KINETIC & Friends” pop up at A 2nd Cup
Photo by Taylor Brown.

O.K., Let’s get back to music and to the May 6 program at the MATCH, “Musical Madness.” You describe Beethoven’s Grosse Fuge as famously shocking. Why?

Beethoven’s Grosse Fuge has caused controversy and divisiveness since it premiered in 1825. Not only is it incredibly virtuosic and demanding on the performers, but it also sounds far more contemporary than anything else written during that time – with its chaotic textures, chromatic themes, and constant posing of existential questions. Alex Ross called it the wildest, grandest fugue ever composed, and Arnold Schoenberg even saw it as a premonition of atonality. He originally wrote it as the final movement to his String Quartet Op. 130, but following the premiere, critics were bewildered and found that ending to be nonsensical. Eventually, Beethoven wrote a different ending to the Op. 130 that was much more amiable. Nowadays, the Grosse Fuge is played as a standalone work, which is how KINETIC will be performing it – but instead of the original quartet version, we’ll be playing it as an orchestra with all 16 of our musicians!

How wonderful that we get to hear your violinist Giancarlo Latta’s new work. How did that come about?

Giancarlo and I have been discussing the idea of him writing a work for KINETIC for quite some time now, so we’re all excited that it’s finally happening! We all know Giancarlo primarily as an accomplished violinist (he’s actually a founding KINETIC member), but he’s also garnering increasing attention as a composer and a specialist in contemporary music. The composer-performer dual title is actually quite rare these days, so KINETIC’s premiere of Giancarlo’s work will be a significant moment for us. 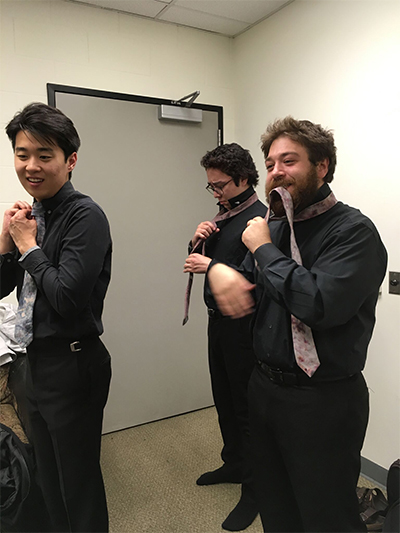 Heemin Choi, Alejandro Valdepenas, and Nathan Watts putting on their
Kathrine Zeren ties in the green room.Photo courtesy of KINETIC.

Anything to add on your choices for the rest of the program?

This concert’s theme, “Musical Madness,” ties in with each piece on the program to varying degrees. The Mozart, for example, is one of the composer’s darker works and features a grand, stately introduction followed by an insistent, almost obsessive fugue. Carlo Gesualdo, the Renaissance duke/composer infamous for the grisly murder of his lover, wrote madrigals for four, five, and six voices that are equally infamous for their harmonic adventurousness. (They will be played in arrangements for chamber strings for KINETIC’s program.) Erkki-Sven Tuur’s L’ombra della croce (of which May 6 will be the U.S. premiere) is an homage to Gesualdo; in turn, Golijov’s Last Round pays tribute to the Argentine Nuevo Tango master Astor Piazzolla with two string quartets (separated by a double bass) at times battling each other ferociously. The program as a whole unites several seemingly disparate works strung together by their virtuosity and musical intensity.

What are the big highlights of next season?

Without revealing too much just yet, our 2018-19 season will have a deeply American focus, showcasing both the music of emerging and established American composers of the 20th and 21st centuries. We’re also very excited to be teaming up with Aperio, Music of the Americas, for a program that will celebrate Brazilian-American music. Stay tuned for the announcement!

What advice to you have anyone wanting to start a chamber ensemble?

I would tell them to go for it! It is totally worth it to start a project that you really believe in – whether that’s a chamber ensemble, a musical festival, or something else – as long as you have a clear vision for what you want to create and why, and you are determined to work hard!