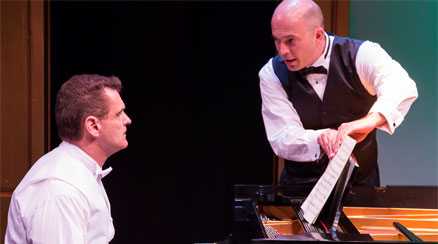 Before I begin this review I should let it be known that my piano teacher fired me as a student, due to lack of skill and natural talent, as well as an inability to remember to practice. So it’s no wonder that 2 Pianos 4 Hands at Stages Repertory Theatre brought up some tender baggage. Richard Greenblatt and Ted Dykstra’s hybrid concert/stand-up routine tells the story of two young pianists who make the trek from recreational lessons to serious conservatory studies.

Greater Tuna style, they take turns playing each other’s eccentric and sometimes cruel teachers, spicing up the proceedings with some excellent piano playing. Tom Frey and Jeffrey Rockwell are terrifically likeable actor/ musicians, who handle the jokes, the drama and the music with deft skill. Frey’s whimsical physicality added to the giggle factor. Curiously, the music itself makes for the most playful comedy.

The play feels most authentic when the young musicians have to decide whether to go on or quit, a milestonefor anyone who has ever dared to train in the arts. I could have done with fewer and less-obnoxious piano teachers; one was enough for a lifetime.