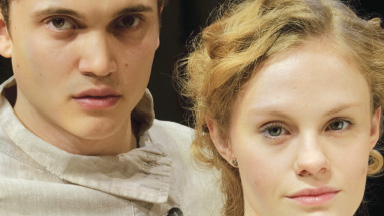 The Alley Theatre Tackles “The Seagull”

THERE ARE 32 KNOWN ENGLISH translations of Anton Chekhov’s 1895 play “The Seagull, for sale ” and when deciding to add the title to the Alley Theatre’s 2011– 12 season, thumb Gregory Boyd and his team read every one of them. After all, unhealthy this would be only the second Chekhov play at the Alley in Boyd’s 25 years there and his first crack at this particular work. In his first season at the Alley in the late 80s, he directed “Three Sisters,” which he has directed four times total in his career — “12 sisters worth,” as he puts it. But for “The Seagull,” the masterpiece among a collection of masterful works by the Russian writer who Boyd calls the greatest playwright of the modern era, everything had to be just right. He found revelations in a number of translations, from Tom Stoppard’s (which felt “too British”), to the first 1909 English translation and the seminal 1939 translation by Stark Young, which was done in collaboration with actors Alfred Lunt and Lynn Fontanne, who famously starred in a New York production that year. As a play about the theater, having actors involved proved to be insightful.

Still, none of them felt perfect. “The fact that there are 32 translations says that none of them are considered definitive,” Boyd says.

So he commissioned two separate literal translations from the original Russian, with the translators working independently of one another. The result is a combination of those, with some inspiration taken from the 1939 version.

“You wonder if people really spoke it while they were writing it down,” Boyd says. “Part of the reason Chekhov is unique and why you can’t really make a film version of these plays is because it’s not always the person talking that’s the focus. It’s important to Chekhov for you to see all of the characters all the time, which the theater lets you do. In the language of film, if you stay close-up or at a two-shot, someone’s choosing for you who to eliminate. But many times the eliminated silent character is the one whose world is changing. He doesn’t communicate the play strictly through the dialogue; that’s one element of what he’s doing.”

“The juxtaposition of a silent character to a speaking character and the juxtaposition from scene to scene is what he’s going for,” he continues. “So if the dialogue calls attention to itself, with a clunky word or an old-fashioned word or a too-British-sounding word, you’re not making the scene work. We’re trying to make it as speakable as we can without being modern or contemporary.” Even in 1939, Stark Young wrote about his translation that “we could scarcely pretend that Chekhov’s meanings as a rule are not easy to discover.”

It’s an issue that has perplexed theater practitioners in the past century: how to keep this play about a group of actors, writers and artists at a Russian estate as true to the original as possible.

One of Boyd’s commissioned translations — from a former colleague at Williams College — yielded a surprising result: “It was funny,” Boyd says. “It wasn’t simply literary or poetical. His lines were shorter in their rhythm; there were fewer words in them. I hate productions of these plays that go on and on. The plays are pretty fast if you do them right.”

That isn’t so surprising when you consider that it’s often repeated that Chekhov considered many of his plays comedies, even if that might be a hard concept for modern audiences who want to compartmentalize everything. Admittedly, “The Cherry Orchard” probably offers more laugh lines than we usually get from “The Seagull.”

“He called them comedy, but Chekhov is a little bit of a trickster too,” Boyd says. “It’s not comedy like ‘The Comedy of Errors’ is a comedy. He’s really trying to get people to stop being so morose and moody about it. Bad things happen in ‘Seagull,’ there’s no question about that, but I don’t think you can categorize it as a drama or a tragedy or a comedy. It’s a play. A Chekhov play is a very particular kind of animal.”

Boyd’s production features Alley Resident Company members James Black (as novelist Trigorin), Jeffrey Bean, James Belcher, Chris Hutchison and Todd Waite. Josie de Guzman is the actress Arkadina and Karl Glusman is her son, aspiring writer Konstantin. The production takes place in the smaller Neuhaus Stage, because Boyd likes it when the classics are done there — “You get a chance to see these iconic plays up close and they get much more of a human face when you do that.”

It’s interesting to note that the production comes on the heels of several highprofile and acclaimed Chekhov productions in New York in 2011. Like all classic writers and their individual works, these plays seem to have cycles. When the legendary Peter Brook, known for producing original work, revived “The Cherry Orchard” in New York in 1988, Boyd asked Brook why he chose to revive Chekhov after so many years of producing his own work.

“He said ‘when the world is very tense that’s when Chekhov becomes back into our consciousness.’ I think that’s probably true right now. That’s why we’re seeing a lot of revivals. The atmosphere in the world could use some healing, the heavily oxygenated air that Chekhov brings.” That sentiment is true in any language.

— MARK LOWRY
Mark Lowry is an arts writer based in Dallas. He’s the former theater critic of the Fort Worth Star-Telegram and the co-founder and editor of the North Texas performing arts website TheaterJones. com, which is a media partner with Arts+Culture NTX.