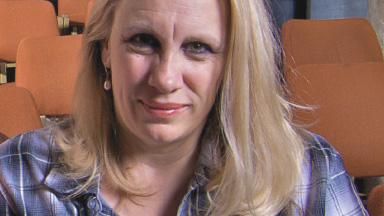 Above Board at Undermain

Don’t let her worn jeans tucked into high top cowboy boots fool you. Behind the Odessa native’s soft- spoken down-home demeanor lurks a sophisticated, worldly artist with a comprehensive vision for her company focused taut like a laser beam.

Criticalrant.com’s Alexandra Bonifield met Owens in Undermain’s offices adjacent to the company’s basement venue in Dallas’ Deep Ellum, to discuss Undermain’s season, which just got underway with “Ages of the Moon,” playing through November 12.

A+C: How do you select Undermain’s season?

KATHERINE OWENS: We look for variety that relates to our aesthetic, something always evolving. We thrive on works with lyrical text, heightened poeticism. Our associate producer Suzanne Thomas and Stephen Foglia, our literary manager, cast very wide nets, and bring new playwrights and works in for consideration.

Part of what I do is work with our existing featured playwrights and maintain Undermain’s lineage of producing creative literature, including classical “ancestors” like Samuel Beckett and Harold Pinter.

Talk about the current season, which just opened with the Southwest regional premiere of Sam Shepard’s “ages of the moon?”

I’d seen “Ages” in New York and was so taken with it. There was some kind of right’s issue, but we waited for it, holding our collective breaths. I revere Sam Shepard. He’s a master dramatist, an essential artist to Undermain from the company’s first season. The play feels shamanic, with a familiar Southwestern landscape, poetry and characters our Texas audiences can relate to. It’s like Russian audiences seeing Chekhov performed. If you live in Texas, you know people just like the two characters.

< Drew Wall and Newton Pittman in “The Dog Problem”

The nationally and regionally respected director Patrick Kelly, formerly from The University of Dallas and Stage Number One’s Artistic Director, where Undermain grew from, proposed Harold Pinter’s “The Birthday Party.” It was last produced regionally in the early 60’s, and shocked the theater scene everywhere, changed the way artists presented contemporary American work. It’s time to bring it back for current audiences. It’s the first show we cast for this season. Audiences love Patrick’s direction and so do we; we’re delighted he is taking time from his busy schedule for us.

I looked at two pieces by Len Jenkins, whose “Port Twilight” worked so well here before. His larger cast play is complicated, extravagant, panoramic; John Arnone, our designer, had been discussing its delights and challenges for some time with Len. It’s just right for us and fits our space. We’ll also continue with two staged readings at the DMFA, always well-received. We have no solo piece like the divine Taylor Mac this year (“The Beast of Taylor Mac”), but we hope to bring in more like him, maybe a puppetry group at some point….

What about Undermain’s subscriber base?

It’s only existed, formally, for three years. All the staff is focused on expanding it. Steve Jobs once said: “It’s not the consumer’s job to know what they want.” Audiences don’t have to have a wide knowledge of the texts we choose but a willingness to experience the journey with us. We want them to explore and trust our traditions, the tributaries that became our sources, which will become our benchmarks.

As a director are you more process or product oriented?

Clarity in production is extremely important to me. I try to avoid eccentricity or expressing my personal opinions in our plays, keeping “mind in the middle” so the audience isn’t led to a predictable outcome. I’m very product oriented, maybe a surprise to some people. Our material may be liminal, mercurial, but a play’s performance has to be just right, specifically executed, I don’t have a particular directing process for every show, don’t always start with a table read. I am dedicated to what I’m driven to present. Can we cast it? Can its technical challenges be accomplished? Not using as long rehearsal period as before — it’s now a five week period.

> Christopher Piper in “The Shipment”

As a director, I keep references at hand that feed me. I do more editing: subtracting, sculpting, pruning, rather than adding. Reactions? Cut the actor’s facial reaction, overt attitude; let the line carry the emotion. Perceptions? Color theory? Underlying physiological factors? Theorists and directors like Japanese Yoshi Oïda, whose work “The Invisible Actor” I consult regularly, influence me.

What is your campaign for the future and how do you continue to build Undermain’s audiences and supporters?

It’s a major gifts campaign, incorporates an endowment, new artist funding, operational improvements, like our seats and lights. We’re planning to hire a professional fund-raiser to manage on-going fundraising. We’re looking for the right professional development director right now, experienced with the ins and outs of Dallas’ arts funding scene. We have a Challenge Grant of $125,000 that needs to be matched.

How are you getting the word out?

Engagement is the key word. I have a blog but I want to keep distance from the proliferation of social media today. I feel it presents more challenges and limitations than benefits. How to stand out from the millions of people and businesses flooding Twitter, Facebook, LinkedIn? I believe traditional marketing still applies to theater. I want to try to make the people who come to Undermain Theatre as audiences totally love it as we who live for it do, deeply and personally.