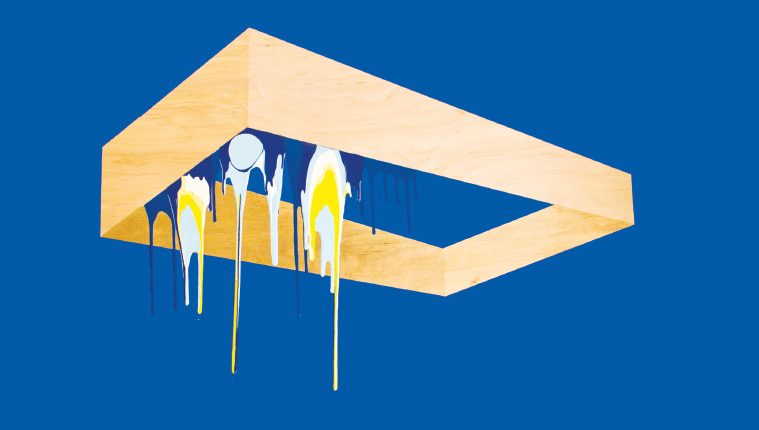 Even better, he was born and raised in Houston, goes wild for science fiction, plays rock music, and makes some really kick-ass paintings. After completing his graduate studies, McFarlane was Artist-in-Residence at Lawndale Art Center (2010-2011). Accepting the residency meant that he could return to Houston, and Lawndale’s prime Museum District location meant walking distance to many of the city’s unprecedented arts institutions. The experience was a positive and timely one that gave him his first glimpse into the world of the professional artist, affirming his suspicions regarding discipline and self-motivation.

He explains, “I feel you get what you put into it — sitting with the artwork and putting in the hours. I had been training and working in graduate school nonstop for seven years, but at Lawndale, I was on my own for the first time. Another first for me was being on display. I was used to being a private artist and only showing work that I was ready to share. Working in a public space forced me to expose more of my process and artworks in various stage of completion.”

The Lawndale residency also provided the right context and environment for McFarlane to meet Barbara Davis of Barbara Davis Gallery. “As I got to know Barbara, I could tell she was passionate about contemporary art. It was reflected in the way she spoke to me about my own work and I could also see it in the artists she represented. When I visited her gallery she brought out of her display big, beautiful, heroic paintings by Mie Olise, Gavin Perry, and Joe Mancuso. I saw that she was someone who cared about abstract painting and we hit it off personally, so that’s a bonus.”

Fresh from inclusion in the 2011 Houston Fine Art Fair, McFarlane will have his first solo exhibition of truly professional caliber in Houston at Barbara Davis Gallery, “What I Saw” (December 9, 2011–January 6, 2012).

McFarlane’s method of abstract painting has developed in various stages. Early on, he incorporated sketches of the human figure and found objects — everything from cardboard boxes, trash from his studio, and his own clothes. He finally realized that paint was the real object of his interest, and that he could make it ‘do’ and ‘be’ whatever he wanted.

These days, since he doesn’t fancy himself a brush-work-type artist, McFarlane uses a combination of collage and poured paint to create his paintings. He begins with a wood panel and, after taping over sections that he wants to show through as wood grain, he paints the surrounding areas with a solid hue of deeply saturated acrylic paint that competes with, yet compliments, the wood grain surface. Once dry, he peels pieces of the slick, shiny paint from the surface (“a la fruit roll-up,” he says), molds it into a form, and re-positions it on the picture place. By manipulating several key factors — surface, composition, and illusionary depth — and activating multiple sensations at once, McFarlane constructs an imaginary world. The natural wood grain throws into question whether or not it’s a faux finish, the forms he creates seem to both sit on top of and sink into the picture plane, and the surrounding space is ever-expanding.

“I’m a color junkie — and not always for the bold, bright, shiny ones even though they are sexy. It’s amazing the luminosity and depth you can achieve in a color field and the buzz amongst parts of the form. I’m looking for that hum in my work. I want the colors to simultaneously blend and repel, to exist on that edge.”

When you see “What I Saw,” you might recognize other edgy characteristics, influences, and direct references in Mc- Farlane’s paintings — those of science fiction, a genre of writing that McFarlane often listens to on audio books while he paints.

“I get excited and involved in the descriptive and imaginative language science fiction authors use when they depict forms and creatures from other planets. I often think of these characters when I am developing my own forms.” And make sure to compliment him on how well he can paint wood grain — he loves that.

—NANCY ZASTUDIL
Nancy Zastudil is an itinerant curator always on the lookout for the next kick in the pants, most often in the form of Houston art. Her other writings and projects can be found at www.thenecessarian.com.