‘All the Devils are Here’: A Storm of Movement and Story from Open Dance Project

“These pitiful souls being tossed to and fro in the waves among you, their stories are mine as well,” decrees the magician Prospera in the Open Dance Project’s All the Devils are Here: A Tempest in the Galapagos. This prophetic claim could also describe this world premiere production, which streams until May 31, as it unleashes a storm of movement, dance and story.

Choreographed by Annie Arnoult in collaboration with the company dancers, All the Devils merges two narratives together: Shakespeare’s The Tempest and the true story of three separate Europeans families who migrated in the early 1930s to the then-uninhabited Floreana Island in the Galapagos. All three groups are eccentric in their own way, beginning with a German dentist/amateur philosopher Frederich Ritter (Seth McPhail) and his patient and lover, Dore Strauch (Alisa Mittin). The irony is certainly not lost at sea as the duo abandoned spouses to create their own Nietzsche-influenced Eden on one of the islands that so greatly influenced Darwin as he formulated evolutionary theory.

All the Devils frames this true Galapagos history involving death, multiple disappearances and possible murders with one of Shakespeare’s later works. The Tempest tells the story of a magician Prospero’s political banishment to an island with only his young daughter for company. Years later, Prospero gets his revenge and the restoration of his life through his mastery of magic and with the aid of two fantastical creatures he enslaves, Caliban and Ariel.

The immersive production turns Prospero into Prospera (Annie Arnoult), who identifies herself early on as the villain of the tale. In Shakespeare’s play, Prospero can be played as a complex, weary hero or villain depending on the production. ODP’s imagining keeps Ariel (Joseph Stevens), Caliban (Yoshi Pineda) and Miranda (Jordan Willis) and does away with the rest of Shakespeare’s characters, while making Prospera a bitter, abusive mistress and mother.

Prospera sets the action in motion, but whether she’s merely bearing witness and providing commentary on these real-life figures, their conflicts and mysterious ends or if she’s amplifying the tension and emotions is mostly left up to the audience.

The last full length Open Dance Project show I saw, Panopticon, Arnoult cast herself as a kind of Big Brother or god-like figure who video-projects into the show, watching the dancers and audience alike. So, when early in All the Devils Prospera claims dominion over all the characters and their stories, I had to wonder (rather amused) what type of meta-commentary Arnoult might be making about the creative process. Perhaps all creators become tyrants from the perspective of their creations when moving and manipulating (a.k.a plotting) the narratives of those creations.

All the Devils uses lines from The Tempest as well as historical record and contemporary witness accounts, magically transforming the two narratives into a beautiful and monstrous new creature all its own. The company’s immersive works usually contain narrative cores, but this one does feels like a danced play.

At the same time, much of the drama is danced, not spoken. While the characters talk and soliloquize around each other, most of the couples and trios work through their love and battles with their bodies, not words. The ocean seems inspiration for some of dance work as bodies crash together, becoming kinetic tempests themselves, as they roll on the floor and move in the air. At one point, we see the entire relationship between the Baroness and her lovers depicted in a five-minute dance that portrays the devolution from loving lust to jealousy and favoritism to violence. 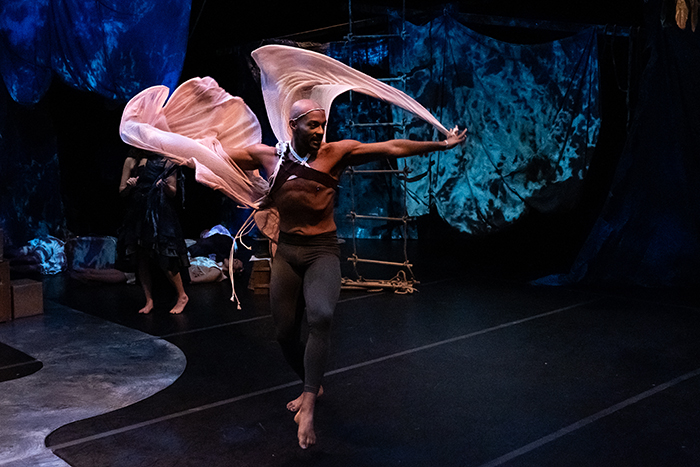 Dancer Joseph Stevens in All the Devils Are Here: A Tempest in the Galapagos co-presented by Open Dance Project & DiverseWorks.

All photos by Lynn Lane. 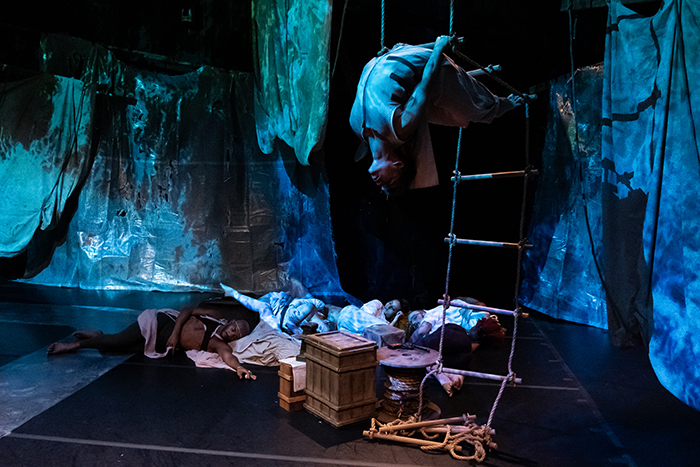 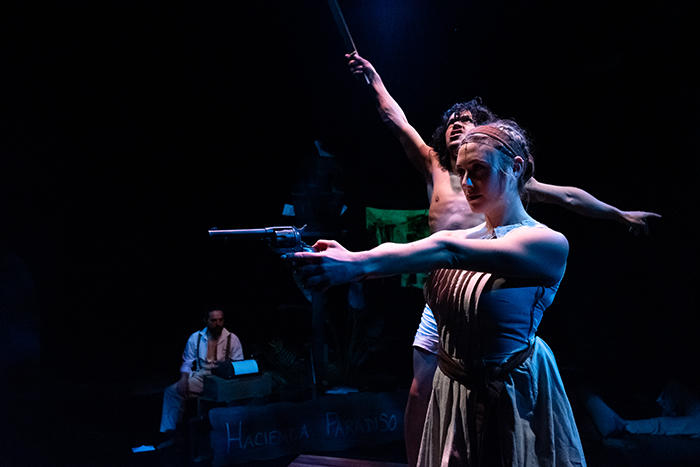 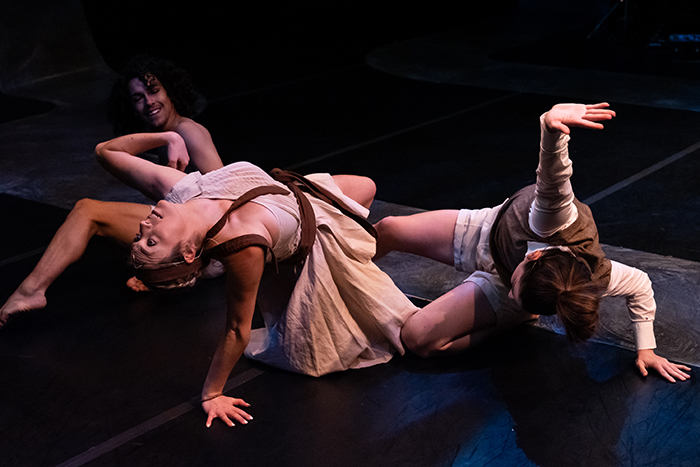 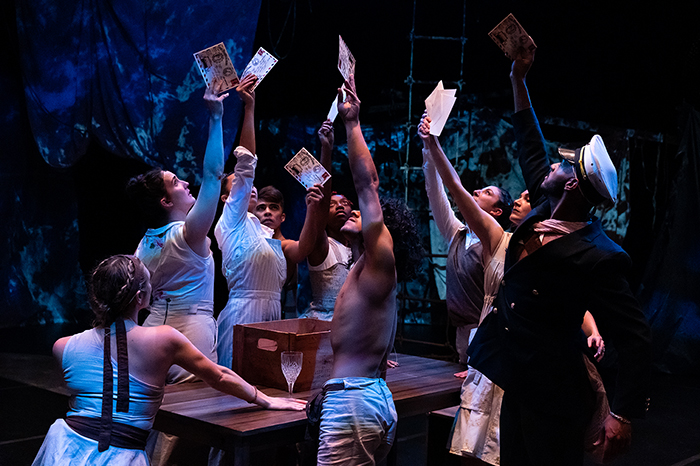 The look of this devilish world is rich and layered as the movement and narratives thanks to the design team. Set designer Ryan McGettigan, lighting and projection designer David Deveau and costume designer Ashley Horn have created an environment that merges magic, myth and dream with touches of 1930s true crime/ island noir. Particularly powerful is the use of documentary footage that helps ground the viewer into this era between the great wars.

While Prospera commands the weather within the story, composer and percussionist Kirk Suddreath creates a musical atmosphere that gives the experience the breath of dramatic life. From storms to boar hunts to incidental music for a Nietzschean monologue, the devil’s in Suddreath’s melodious details.

One frustration lingers for this viewer: the pandemic curse that prevents us from being in-person for the production, especially one created to immerse an audience. The videographer uses a mobile (gimbal mount) camera to dive into the action and get at-home audiences as up close as possible. Still, I missed having the freedom to look where I wanted, perhaps to follow one character more closely, even as another takes the metaphorical spotlight.

The two live performances were shot slightly differently, so viewing both gives some different perspectives and impressions. I’ve heard rumors that Open Dance Project might try to bring the production back to Houston in the future and allow audiences to roam through the story. If this happens, I’ll be first in line to dive once again into this tempestuous dance maelstrom.