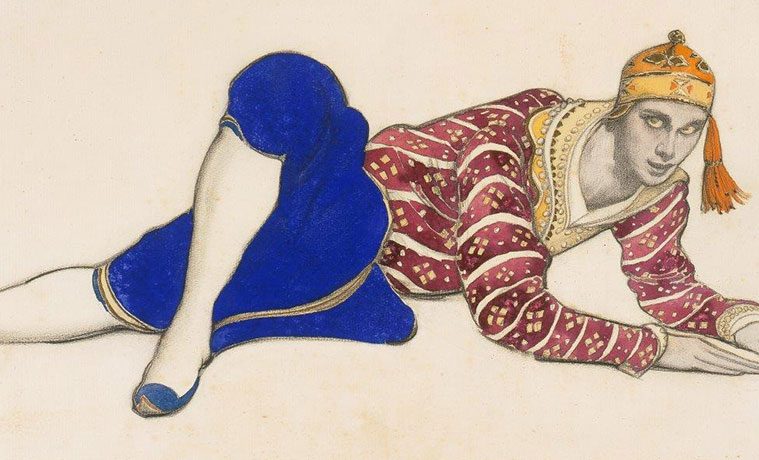 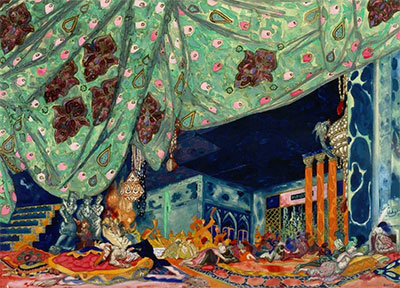 Leon Bakst, Variation of the original scene design for Schéhérazade, after 1910. Watercolor, metallic paint, and graphite on paper. Gift of Robert L. B. Tobin, TL1998.81.

Russian impresario, art patron and showman Sergei Diaghilev changed the face and feel of ballet without ever dancing a step himself, with the creation of his Ballets Russes, a company with sturdy Russian roots, which first bloomed in Paris before seeding the rest of the Western Europe and the United States with a new vision of dance productions.

Blake believes that to understand the change Diaghilev brought, we have to look at ballet in 19th century, when traveling companies had a one-size, fits-all approach to costuming and scenery design.

“The idea of creating brand new scenery and costumes that were perfect for a ballet or opera was really a new idea around 1900, and the Ballets Russes pioneered that,” explained Blake, who later described the Ballets Russes as “a symbolic touchstone for this new approach to theater as a totality, where everything—the music, choreography, text, and images— was supposed to be conceived together.” 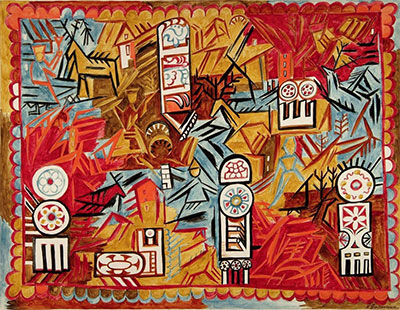 Diaghilev’s genius was in creating productions where all aspects, not just the dance itself, were forms of art. To achieve this, he brought in “the most exciting major painters, graphic artists and sculptors of the day” —a list of artists that includes Pablo Picasso, Henri Matisse and Coco Chanel.

All the Rage in Paris, however, will tighten its focus to four great Russian designers, whose names might not be as well known to the average museum goer: Léon Bakst and Alexandre Benois, who were with the Ballets Russes from the beginning; Natalia Gontcharova; and Mikhail Larionov. Blake notes that while Bakst and Benois still had one foot in 19th century Romanticism, “Gontcharova and Larionov were the new avant garde artists influenced by Cubism and Futurism.”

The exhibition’s concentration on these four artists from two different generations will give viewers a good visual taste of some themes and motifs important to Diaghilev’s Ballets Russes, such as the eastern exoticism and orientalism of Bakst’s designs for Schéhérazade, which became the sensation of Paris and made harem pants the must-have look for all those Schéhérazade-themed parties that everyone who was anyone was throwing. In contrast, Gontcharova and Larionov brought to their ballet designs “a sense of nationalist pride in Russian folk and peasant culture as an antidote to the west or to this exoticism,” said Blake.

Also on view with All the Rage in Paris, the companion exhibition Design, Fashion, Theatre: The Art of Pochoir in France, 1910-1930 will examine pochoir, the hand stenciling technique used by many of the Ballets Russes designers to publish illustrations of their work.Blake believes these pieces will help 21st century viewers better understand how trend-setting the designs and costumes of the company were to the larger culture and fashions of the times. 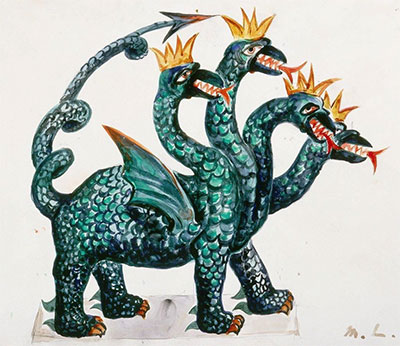 The majority of the artwork, including all of the costume and scene design works-on-paper, as well as many of the actual costume pieces, are from the McNay’s Tobin Collection. Blake gives credit for the depth of the Ballet Russes pieces in the collection to San Antonio native Robert Tobin, who recognized very early the historical importance of these works to theater art and design.

In fact, with the centennial anniversary of the Ballets Russes first productions, the McNay loaned several pieces of the Tobin Collection to the many recent museum retrospectives (like the National Gallery’s When Art Danced with Music), bringing the visual art of the Ballets Russes back into the public consciousness. This spring, these treasures are staying home, allowing Texans to get an intimate look at the artful designs that changed ballet forever.