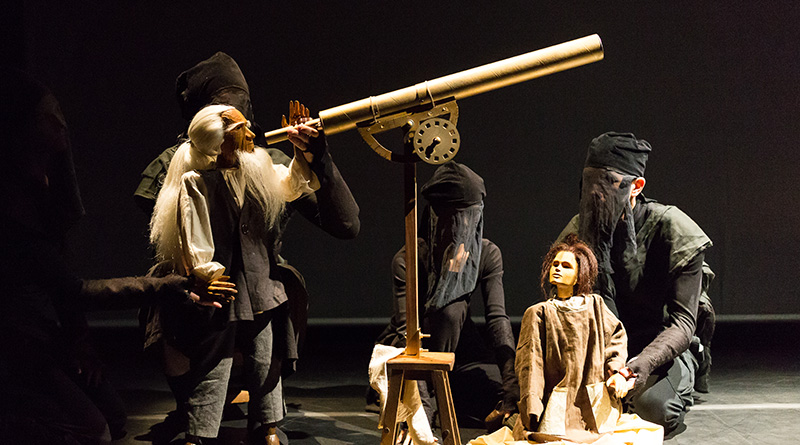 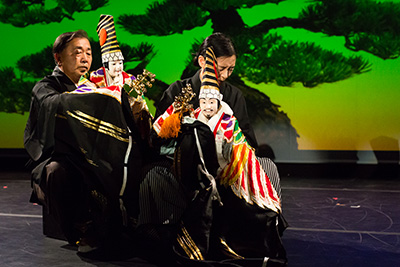 The metaphor that life is a journey, a road we trek, and the decisions we make, the diverging paths we must choose, is probably almost as old as roads themselves, and an analogy not confined to any one culture or era. Shank’s Mare, the touring puppet show that had its recent Texas debut at the Asia Society Texas Center in Houston on April 13-14, 2017, uses this life-as-a-journey conceit as its central narrative. Yet, by merging a centuries-old puppetry form with 21st century technological production innovations, this performance paves new meaning and beauty into that much trotted upon road metaphor.

As a collaboration between New York puppet artist Tom Lee (director and designer) and Japanese puppeteer Koryu Nishikawa V, the fifth generation headmaster of the 160 year-old Hachioji Kuruma Ningyo Japanese puppet theater company, Shank’s Mare certainly represents the artistic possibilities that can arise when east meets west, but the production also proves how ancient stories and forms of art can evolve and transform in order to enchant even the most cynical contemporary audiences.

No shocking plot twists reside within the Shank’s Mare simple, yet sometimes emotionally brutal two-fold story, as the program notes summarize the whole narrative in advance. A skilled samurai trains his young son in the ways of bushido (the warrior honor code) in one storyline. In parallel, an old astronomer sets out with his student, a young girl, on a long journey to observe a comet that will never again cross the skies in his lifetime. The alternating scenes sometimes merge into one another, though the characters never meet, and we see the samurai and astronomer forced to choose paths at that metaphorical crossroads of life, choices that will define the spirit and consign the soul to heaven or hell. 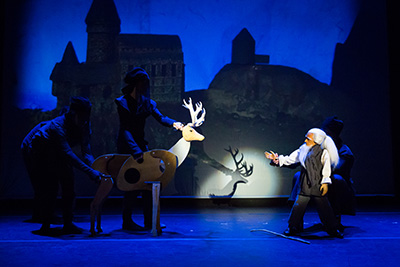 After an enemy murders his son, the samurai abandons his life of honor to become a thief and bandit, while the astronomer and his student brave grave physical hardship on their long climb to the top of a great mountain range.

The behind-the-scenes (and literal behind-the-puppets) production of this story somewhat mirrors the duel nature of the narrative. This type of puppetry, Kuruma Ningyo, basically meaning puppet on a cart, becomes the rich ritualistic and traditional thread of the performance. By sitting on a small black cube with hidden wheels underneath, Nishikawa and the other puppeteers, including Lee, use his or her feet to move the puppet’s legs and make them stomp or run across the stage, while simultaneously using their hands to move the puppet’s arms and head.

Meanwhile, bringing this ancient art into the 21 century, a puppeteer and cameraman (Chris Carcione) films a movable miniature set on the side of the stage. The footage is projected in realtime on a large screen behind the puppets to create an elaborate and ever changing setting for the action. Filming the miniature to one side also allows the audience to see the precise and delicate movements from the puppet’s point of view. For example, as we watch the astronomer consult his scrolls we also see, projected behind him, his hands moving the pages. 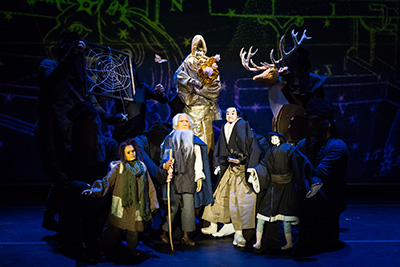 The performance contains no spoken word dialogue, and instead two musician/composers: Bill Ruyle (hammered dulcimer and percussion) and Chieko Hara (shamisen and flute), create a dramatic score that becomes a kind of inner and outer life-melody for the characters. The puppets–and their costumes (designed by Katherine Ferrier)–are each a work of art onto themselves, but through the power of theatrical storytelling, we tend to forget their very inanimate nature as their saga progresses.

Even though the vengeful samurai, his sweet son, the learned astronomer and his courageous student are played by pieces of wood, first sculpted by human artists then manipulated by master puppeteers, their stories evoke just as much emotion and sympathy as human actors would. And when the narrative brings the girl into the present to scroll through her iPhone instead of unrolling medieval scrolls, Shank’s Mare allows us to see those ancient roads reflected in the cyber byways and highways of today. No matter if portrayed by humans or sculpted replicas, a good theatrical story will always be a welcome art respite on our own life road.