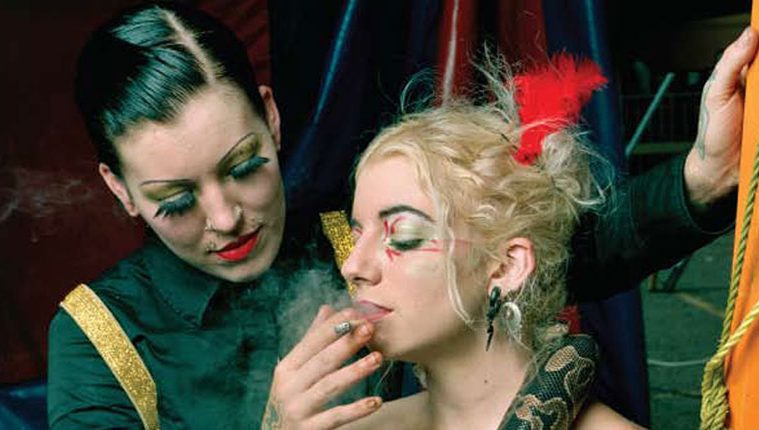 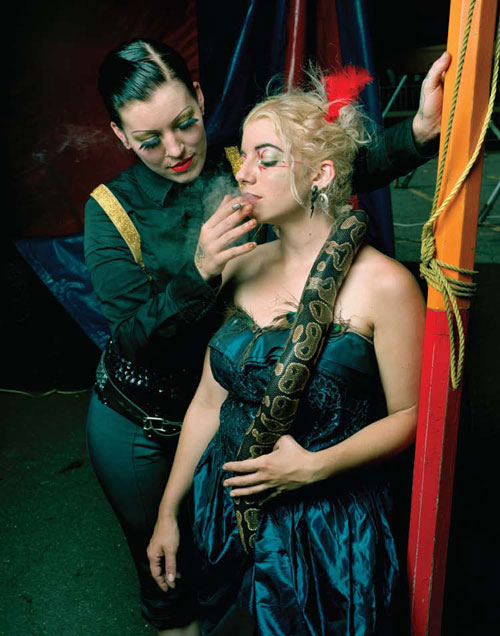 The work of husband-and-wife team, price Jimmy and Dena Katz, is colorful – in every sense of the word. It’s also now on view at PDNB as part of a group show of 25 artists. While plenty of the work is stellar, the Katz images are jaw dropping for a number of reasons. They’re candid portraits of sideshow performers and, thus, the subject matter itself is unsettling. They operate like postcards from a lurid and disquieting underworld. However, they also convey a sense of the performers’ camaraderie, and even exuberance, for their unusual lifestyle that is perhaps even more surprising than the sideshow itself.

Jimmy and Dena Katz typically work at jazz venues, photographing well-known musicians for magazines and record companies. However, they are also known for some “off-road” work that usually delivers the world with a sensibility canted toward the quirky. Their World of Wonders images are no exception. It’s also clear that they’re marvelously adept when it comes to capturing rare and insightful moments. To borrow a term from the jazz world, the images are riffs on the outré life of performers who are utterly at home with their offbeat lifestyle and friends.

We should all be so fortunate. Also, lest you feel sorry for any of the folks in the sideshow, the following quote might make things clearer from their perspective. Performer “Chris” states, “There’s a bad connotation about the word ‘carnie.’ There’s a difference between a carnie and a showman. It’s like the difference between chicken shit and chicken salad: they both come from the same animal but they’re very different.”

The duo took some time recently to discuss their work with Arts+Culture.

A+C:   Jimmy, how do you and Dena collaborate? What are your various roles in producing work?

JIMMY KATZ: We work very organically and we are both part of every aspect of the image. We often don’t agree about specifics but we shoot a lot and try out many different ideas. We both shoot but in this situation, because we were shooting large format, I normally work the camera.

A+C:   Is there any commonality between your work in the jazz world and your images in the side show series?

Actually everything we do is based on our work in jazz. Meaning that we come to the project with a wide set of skills and some set ideas but then we improvise based on the specific situation. In our style of shooting, we are responding to the subject and the subject is responding to us, but in this situation we were also trying to work around their performing schedule and routine and not affect that. We don’t always know where the best frame will come from; however, we are always trying for intimacy and spontaneity. Doing this with a large format 4 x 5 camera is what makes this such a challenge. That’s the trick!

A+C:  Dena, do you think your previous experience living in Moscow gives you an ability to see American life – and its idiosyncrasies – with an unusual perspective? If so, how would you characterize it?

DENA KATZ: Living in a closed society, my visual image of America was primarily from the movies, meaning that it always had a slightly theatrical patina. That impression was so strong that, even after living here for 23 years, my instinct is to reflect reality with a dramatic edge.

A+C:  How did you come into contact with the sideshow you photographed? Are you still in contact with any of the subjects of your images?

They are quite famous, Ward Hall (editor’s note: Mr. Hall is the proprietor of the sideshow) was not particularly enthusiastic when I contacted him but he told me to stop by his trailer in Pennsylvania. When I shook his hand for the first time he said, “My name is Ward Hall and I am a professional liar.” I smiled and the deal was struck. He and his partner, Chris, are two of the finest and most honest people we have ever met. 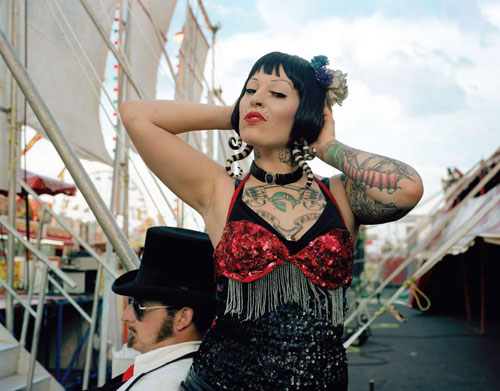 A+C:  What is the strangest thing that happened during your time photographing the sideshow series?

A+C:What was the underlying mood that characterized the performers, etc., in the sideshow? Determination? Despair? What are these people doing now? Or do you know?

Our general feeling was that this was their life and it was real. They wouldn’t be doing anything else and most of them are still at it.

A+C:Please tell us the story behind this image.

This image is a good example of how we work. Our idea was that we wanted to photograph Natalie, the blonde girl with a snake. The snake started to move around and Natalie was not really able to control it. We shot quite a few images that were all right, but not really strong. Then Chelsea came out of the back of the tent and started to interact with Natalie. It was like a jazz performance where we all had certain abilities and ideas and then it just started to expand. Getting an instant, a moment like this, that is unplanned, intimate, real and spontaneous, and then doing it on 4 x 5 film is what we are known for.