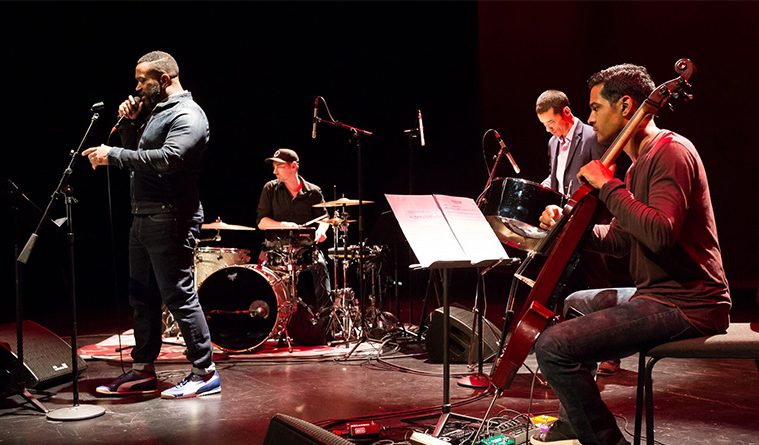 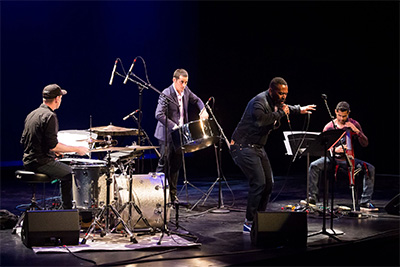 The words, and the music that gave it voltage, burned, leaving a searing mark on the audience at Matchbox 4 during (M)iyamoto is Black Enough’s Oct 14th performance, presented by Aperio, Music of the Americas.

Aperio is on a roll in bringing new sounds and fearless artists to Houston—Gabriel Kahane last season, and now (M)iyamoto is Black Enough (Roger Bonair-Agard, Andy Akiho, Jeffrey Zeigler, Sean Dixon), a group so in tune with the chaos and flux of our time that witnessing its performance felt at times like participating in a revolution.

Revolution begins with words. Roger Bonair-Agard, poet, slam artist, son of the islands of Trinidad and Tobago, broke open the barriers of constructed language with his relentless verse, taking us through the wide expanse of history, memory, identity, race, and politics with unflinching openness and clarity. You can find his words in several published collections of poetry, including Bury My Clothes, long-listed for the National Book Award.

Already powerful on the page, Bonair-Agard’s text, cut and reworked from his poems, acquired an intensely visceral energy when set to the strikingly original music of Andy Akiho, the band’s steelpan player and composer. Each member can stand on their own as brilliant artists, but together they are a powerhouse. The deliriously complex, sonically vibrant, and piercingly emotive music virtuosically realized on steelpan, electric cello, and drums took me on a ride deep into the abyss and screaming high into the void. The panorama of musical influences–calypso, funk, R&B, minimalism, reggae, hip-hop, jazz, even echos of koto and temple bells, seemed only an impressionistic reference. Everything sounded completely fresh and new. 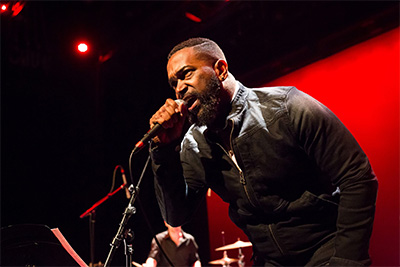 What struck me was how physical the words and sounds became, how ominous yet tender the darkness, how sharp the anger on the knife’s edge, how quivering and broken the words of pain, how feverish and chaotic the violence. The beat is always there, grounding the words even as they ebb and flow–lines break, phrases repeat, gain power, rhythms undulate, riding the waves.

The genius of the music is how all the elements–a simple, insistent ostinato, crystalline passages on the steelpan, complex rhythms layered together then set apart, dynamic punctuations on the cello, are internalized by each performer and becomes the churning engine that drives the poet’s message home emphatically. The poet’s voice, robust and resonant, rose above it all. Even on the brink of chaos, when the words gather heat and build to a fiery climax, the music never overwhelms. It is as clear as the poet’s voice.

And what does the poet say?

The poet is not afraid to address the most vital social issues of our time. In “Nina,” he is speaking to his daughter as they walk through Brooklyn. He begins, “The bike shop used to be a bodega. The liquor store used to be a pizza parlor. This café used to be an Italian restaurant. That kiosk used to be Joe, an old man on a little stool.” And it ends with “This used to be Brooklyn.” It’s a blistering manifesto against the ravages of gentrification. Just that morning, Houston had its own reckoning with this issue at Project Row Houses, where artists, residents, and community organizers are hosting a series of events that will lead to direct action in revitalizing the historic Third Ward neighborhood while preserving its rich African American culture.

The poet looks back into his past, his history, our history. The poem about Jit Samaroo of Arouca, the greatest arranger of pan, is thick with references to the violence of colonialism, the memory of and longing for home, racial injustice, the experience and wisdom of the generations before him. Here is a poet looking back at himself and where he came from, the immigrant, in search of his identity–“the poet knows the code, knows what it means to have six simultaneous melodies locked away forever. It is deep in the calypso, this burying of one’s best clothes.” He has claimed his identity. The music wraps itself around this loaded poem, continuously transforming repeating cells to echo the story’s arc and sweep.

Two interludes displayed the prodigious skills of Sean Dixon on drums and Jeffrey Zeigler on electric cello. Classically-trained musicians gone wild, Dixon pumped up the adrenaline with his sheer virtuosity on drums, while Zeigler explored the experimental sound palette of the electric cello in Three Shades, Foreshadows, an Akiho composition for tape and electric/prepared cello. The cellist is shadowed by a backing track comprising a sampling of percussive sounds made on a cello. The result is a hyper-looped, dervish-like frenzy of blurred perceptions that blows the mind.

Speaking truth to power on subjects ranging on colonialism and slavery, police brutality, gentrification, gun violence, and being black in America, MiBE challenged, protested, looked inward and outward, insisted on waking us up from apathy, to feel the power of words to the beat and heat of the music, to have imprinted in our memory the pain, the anger, the fight we have to fight. Bonair-Agard sent the audience into the night with one final refrain, and etched into our minds an anthem for a social movement–“BE ALIVE, BE BLACK, BURN, BUILD.”

Young people from Houston’s Meta-Four, the youth slam team led by Outspoken Bean, wowed the audience with an opening act of courage and empowerment. Adam Mac, Sebastian Katine, and Lyn Stewart stepped up to the mic, digged deep, and became warriors.

I applaud Aperio and its innovative leader Michael Zuraw for seeking out groups like (M)iyamoto is Black Enough. This is exactly what we need to hear right now.