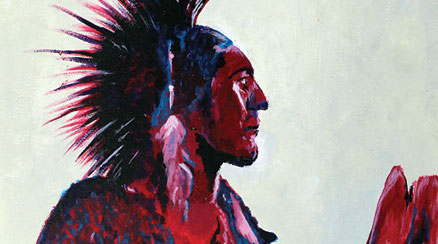 The bigger scale Aurora is expected to become a biennial event. dallasaurora.com.

The call for entries for the 33rd annual Hunting Art Prize in which participants vie for a $50,000 award is now open to artists throughout Texas. Hunting PLC, the international oil services company that sponsors the competition, announced that those interested in entering must be Texas residents and at least 18 years of age by August 1, 2012. Artists can participate by filling out the electronic sign-up form online and uploading one digital image of their artwork in a JPEG format. Single, two-dimensional paintings or drawings no larger than 72 inches by 72 inches will be considered for the prize. The recipient of the 2013 Hunting Art Prize will be announced at a gala on May 4 in Houston. All entries must be received by Hunting PLC no later than midnight, Friday, November 30, 2012.

Dr. Elizabeth Samet, Professor of English at the United States Military Academy at West Point, is the 2012 recipient of the $50,000 Hiett Prize in the Humanities from The Dallas Institute of Humanities and Culture. The award, which recognizes an emerging leader in the humanities, will be presented to Dr. Samet at the Dallas Institute on October 19, when she will make a public presentation in the evening. The Hiett Prize is among the nation’s most prestigious honors in the humanities. The $50,000 annual award was created by The Dallas Institute in 2005 in collaboration with philanthropist Kim Hiett Jordan to recognize a person who has not yet reached his or her full potential, but whose work in the humanities shows extraordinary promise and is already making a difference in the way we think about the world.

The Arts District Chorale has appointed Constantina Tsolainou as Acting Artistic Director and Principal Conductor, effective Fall 2012. Ms. Tsolainou succeeds ADC founder H. Michie Akin, who will remain active with the organization in an advisory and Guest Conductor capacity. Tsolainou has previously served as Principal Guest Conductor for ADC. Tsolainou will conduct the ADC in a December 2 Christmas concert – Welcome All Wonders! – at Saint Michael and All Angels Episcopal Church in Dallas. Founded in 1989, the Arts District Chorale is a signature ensemble of gifted amateur and professional singers from all walks of life, known for innovative presentations of choral masterworks in the extraordinary cultural venues of the Dallas Arts District and beyond.

The Children’s Chorus of Greater Dallas (CCGD), one of the most recognized children’s choruses in the nation, has announced that Executive Director Terry Harley will leave his position in December of this year. In 1999, Harley joined the organization as a member of the Board of Directors and became CCGD’s first executive director in 2002. During his fourteen years of service, he played a crucial role in supporting the growth of the organization from a 150 voice children’s chorus to a 500 voice children’s and youth chorus. The Children’s Chorus of Greater Dallas began its mission in 1996 to give Dallas-area children the experience of musical artistry and excellence through choral singing in a group that reflects the area’s diversity. The organization hopes to announce a successor in early 2013.

Uptown Players, a professional theater group located in the Uptown area of Dallas, has announced its 2013 season which will feature the regional premiere of Yellow, a bawdy but poignant drama from Del Shores, plus two summer musicals, Songs For A New World, and Kiss Of The Spider Woman, and its first holiday show, The Most Fabulous Story Ever Told, at the Kalita Humphreys Theater. Uptown Players will also present its annual fundraising performance, Broadway Our Way, which will be held in January 2013. In addition, Uptown Players will join forces with the Turtle Creek Chorale for a concert version of Ragtime at the new City Performance Hall in February 2013 and will present the world premiere of Re-Designing Women two months later.

Veletta Forsythe Lill has turned in her resignation as executive director of the Dallas Arts District. Her final day is November 1, 2012. She began in 2009, overseeing the opening of the Wyly Theatre and Winspear Opera House. She has also been involved in the development of the new Klyde Warren Park that was built over Woodall Rodgers Freeway, and in allowing food trucks to service the area. Lill served on the Dallas City Council from 1997 to 2005 and has been a longtime arts advocate.

Maxwell L. Anderson, The Eugene McDermott Director of the Dallas Museum of Art, recently announced the appointment of Anne Bergeron as the Museum’s Associate Director of External Affairs, effective November 5, 2012. The naming of Bergeron to this new role completes the reorganization of the DMA’s senior leadership team announced in March, which included the appointment of Robert Stein as Deputy Director and the promotions of Olivier Meslay to Associate Director of Curatorial Affairs and Tamara Wootton-Bonner to Associate Director of Collections and Exhibitions. Bergeron has over 25 years of experience as an arts administrator, fundraiser, and consultant, and has held senior management posts at cultural and educational organizations, including the Solomon R. Guggenheim Museum, the Missouri Arts Council, and the Rhode Island School of Design.

The Fort Worth City Council has slashed the city funding to the Fort Worth Arts Council by 25%, or $266,000, for the 2012-13 fiscal year. This is on top of the numerous funding reductions that the Arts Council has endured since 2009. Despite passionate pleas from arts patrons and community members, all but one council member approved the cuts. However, Mayor Betsy Price promised a mid-year review to see if some of the funding could be restored, and also stated her desire to investigate other revenue streams that would benefit arts funding in the future, such as a tourism tax.