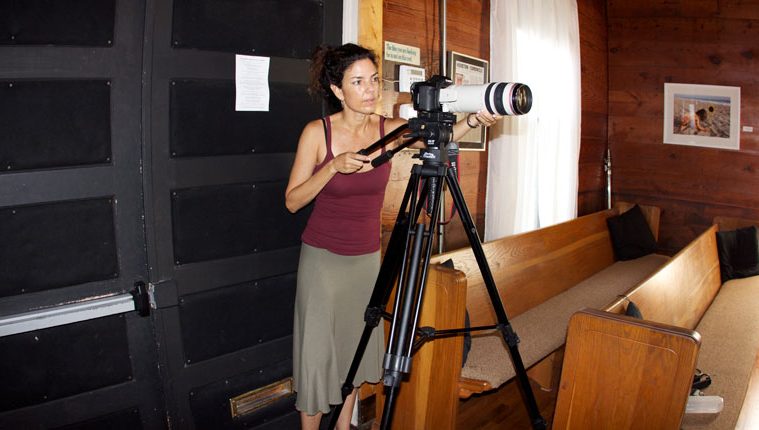 Living and Working in the Same Space

Do you love your work so much you’d move in with it? As numerous Houston artists search for a viable living arrangement for themselves and their artwork, they learn that boundaries are key and, of course, every relationship is different.

In July 2010, artist and film enthusiast Cressandra Thibodeaux fell in love with the church-turned-art house on Aurora Street (readers may remember the building as the first home of Aurora Picture Show). By August, she had moved in and soon after went public with the affair, calling her love by name – 14 Pews, a nonprofit organization dedicated to serving the diverse cultural needs of the Houston community by providing a forum to experience, discuss and celebrate film, art, and music.

Conceptually, the building serves as Thibodeaux’s creative environment. Architecturally, it has distinct living and work areas, with a wall separating the rectory where she resides (originally built as the living quarters for a priest or other church official) and the sanctuary space (originally used for public worship services, choir, etc.). On any given day, 14 Pews hosts up to sixty people (and Thibodeaux’s two dogs) for year-round, independent films and film festivals, music performances and other art-related activities including pop-up art shows, an artist-in-residence program, “Science on Screen” lectures, and free film workshops for HISD high schoolers.

To Thibodeaux’s pleasant surprise, her first house rule of remaining true to her vision – and not recreating someone else’s – has been positively received and supported by the Houston community. Early this month at 14 Pews, Houstonians can continue to support her vision by attending an exhibition of her latest mixed media C-print series, BUFFALO BAYOU.

If the thought of art monogamy doesn’t seem enticing, imagine a more open, communal arrangement: a group of people living together, cooking and eating dinner, smoking cigars, talking and playing music for entertainment. This romantic boarding house model and spirit of camaraderie was what Houston artist Sasha Dela had in mind when she co-founded SKYDIVE in 2008.

SKYDIVE is an artist-run exhibition venue with a mission to broaden the spectrum of the dialogue in Houston by bringing in artists from outside of Texas who push the limits of material forms, for example non-traditional methods of sculpture, installation, video, and more.

Initially, SKYDIVE activities took place in two adjoining rooms on an upper floor of a building at 3400 Montrose. When the building foreclosed and SKYDIVE was forced to move, Dela was working as a building manager to the owners of a house for rent in the Montrose neighborhood. She would often show the house to potential renters and, completely entranced by the idea of supporting artists and building a small community in the house, she began to imagine it as the next home for SKYDIVE. It soon became a reality.

The living situation of the SKYDIVE is, as Dela puts it, “ever shifting, somewhat temporary and always involving people.” Those who live in the house tend to be people from the arts, but residence is not dependent on participation in the art activities. Today, Dela lives in the house with two roommates (a writer and a CORE fellow) who are not formally associated with SKYDIVE.

SKYDIVE’s flexible collaborative model dedicates half the year to programming which provides time and space for the artist-organizers to focus on other responsibilities and projects. During exhibition openings and events, the two stories of the “mostly domestic but somewhat professional” house are open, though people tend to congregate in certain areas such as the main room which is larger with more wall space, or the outside patio area which is open and shady. Dela prefers these kinds of loose boundaries, however she says it is vital to have personal space with a door that shuts, and to provide clear communication when private time is necessary.

Another typical house-setting is Alabama Song, a project that provides Houston with a place where people can converse about not-so-typical cultural things and experience a presentation of non object-based ideas: artist talks, critique and reading groups, screenings, workshops and performances.

“ ‘Art space’ may be the shorthand for what we do but it’s not entirely accurate. In addition to art we feature sound/music, literature, architecture, the culinary: anything that strikes us as interesting. We want to experiment with the art exhibition,” says Alabama Song’s Gabriel Martinez, who lives in the house alone but is joined periodically by resident artists whose brief stays coincide with their projects at Alabama Song.

Other Houston organizations such as Houston Ballet and FrenetiCore have found ways to conjoin the domestic with the professional. The Ballet has a dormitory on the top floor of Center for Dance, providing seventeen students with important amenities for a comfortable live/work environment: a full kitchen, appliances, laundry room, study area, living space with sofas and a television, plus secure access to the building.

FreneticCore executive and co-artistic director Rebecca French lived on the second floor of the organization’s East End renovated warehouse. Though no theater or dance activities took place in her upstairs residence, she realized that, as in other intimate relationships, distance is good and decided to move out. The fact that the entire building shook whenever an 18-wheeler drove past helped inform her move, too.

“Being an entrepreneur/artist in your own space is a lot of fun, but it’s easy to get isolated,” says French. “Since you live where you work, you need to get out of the neighborhood to be in other environments often. You need support and friends to help you stay balanced.”

-NANCY ZASTUDIL
Nancy Zastudil is an itinerant curator who can’t seem to stay away from Houston.