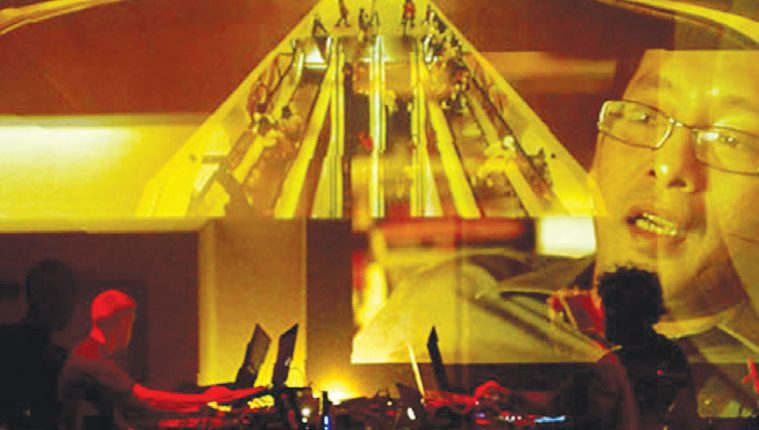 Art-Making in the Here-and-Now

The Light Surgeons SuperEverything*. COURTESY OF THE LIGHT SURGEONS.

The Mitchell Center Calls Great Artists and Attention to Houston

As many readers know, Forbes recently named Houston “America’s Coolest City” thanks in large part to our superb arts organizations. Defining itself amongst these, the University of Houston Cynthia Woods Mitchell Center for the Arts is dedicated to groundbreaking collaborations across the performing, visual, and literary arts.

“The Mitchell Center has always been about art-making in the here-and-now. There is an immediacy in the work of the artists we support,” says Farber. “We select them based on their ability to tell us something new – to open us up to new ways of seeing and understanding the world around us.”

When Farber arrived on the scene in 2003, it was uncertain exactly what the Mitchell Center program would look like. By experimenting with different things during the past few years – short festivals, long research residencies, curriculum, and all kinds of partnerships – she and her staff have grown the Mitchell Center into its current state.

She recalls, “We allowed the artists,  along with our community,  to inform the direction of our organization. I think that is a very rare thing and it’s something I am very proud of.”

Today, the center is committed to interdisciplinary collaborations, with Farber’s vision shaping the stellar (and often unusual) programming. Her recent decision to formalize the Mitchell Center’s commitment to artist residencies positions the organization as incubator for and presenter of the creative process. Interdisciplinary artists begin their residencies with research and experimentation, connecting with the industries, communities, and landscapes of Houston. From here, artists primarily deal with issues of a quintessential 21st century city including energy and power, borders and urban sprawl, and new forms of art and art practice. The residencies culminate in a public showing of the new work the artists have created.

Farber explains, “Mitchell Center artists-in-residence may come to Houston to do research, to use source material from the city, or to collaborate with someone here. In this sense, we are the opposite of a rural artist retreat. Rather than operating ‘off the grid’ we ask artists to develop work ‘on the grid’ – connected to the people, the institutions, and the structures all around us.”

As the Mitchell Center supports artists-in-residence, it seeks to flesh out its own resident relationship to Houston — in turn developing a new kind of contemporary art patronage that allows for an organization to experiment with its mission, attract new audiences, and confront expectations.

“The Mitchell Center relies on artists and colleagues to spread the word nationally and internationally,” says Farber. On the home front, we have the challenge of being a nomadic organization, since most people expect our center to be associated with a building, a theater, a gallery, or a space of some kind. But more and more, I think audiences are seeing the value of using the city as the landscape for exciting new artistic projects.”

This fall season, Mitchell Center artists create hybrid forms that defy traditional art world disciplines and terms. So exactly what forms do these groundbreaking, transformative collaborations take? For starters, there’s the intimate experience of a musician’s heartbeat, and the story of humanity as told through sound and image. If that’s not intriguing enough, there’s SuperEverything*.  And more.

The season’s kick-off performance is The Heart Chamber Orchestra, a joint creative effort from the electronic artist duo TERMINALBEACH, (made up of PURE (Vienna/Berlin), who works in the field of abstract music and sound for performances, and BERGER (Helsinki), who focuses on information processes and feedback structures.) Together, the two artists have created an audiovisual performance where the music literally “comes from the heart,” with musicians wearing electrocardiogram sensors to create an immersive visual environment and musical score generated in real time. The piece is performed by twelve members of the Houston-based Two Star Symphony and presented as part of Aurora Picture Show’s Media Archeology.

Poised to be an extraordinary and unforgettable experience, Farber points out that the event ties together Houston’s long time commitments to heart research and music.

“It will remind us what it is to be human.” she says.

In October, the Mitchell Center hosts Texas-based sculptural artist Dario Robleto in-residence as he investigates the connection between creativity and loss. Known for his meditations on love, death, spirituality and healing (as well as his mind-blowing musical taste and pop culture knowledge), Robleto adopts the modes of both lecture and performance while questioning the role of memory as a device to combat death and loss. For The Boundary of Life Is Quietly Crossed, he places storytelling alongside his vast collection of rarely seen sounds and images, including samples from The Golden Record.

(Short history lesson: The Golden Record is humanity’s story documented through sound and image and put on board the Voyager space probe, which launched in the 1970s and which has now passed the edge of the Solar System. Robleto considers it “the greatest DJ mix-tape ever recorded.”)

The Mitchell Center invited Robleto, in conjunction with The Art of Death and Dying, a three-day symposium that addresses everything from cemetery design to the media’s depictions of death to artistic interpretations of the afterlife, which is presented in partnership with UH Libraries, Blaffer Art Museum, the Department for Hispanic Studies, the Honors College and School of Art.

The Mitchell Center wraps up its season with the unconventional thespian Aaron Landsman, who brings to Houston his national project City Council Meeting, focused on “performed participatory democracy. City Council Meeting is co-presented with DiverseWorks, and marks the beginning of an ongoing partnership between the two organizations to develop and present new performances by groundbreaking interdisciplinary artists.

Experimental collaboration is the life current of the Mitchell Center, as evidenced by their ability to maintain an organizational focus (for example, residencies) while remaining flexible enough to respond to the immediacy that Farber recognizes. Communicating this to the public can be a constant challenge, especially as the organization tries new things. But then again, as Farber puts it, “The art itself is the best marketing we can hope for.”

-NANCY ZASTUDIL
Nancy Zastudil worked at Mitchell Center 2007-2010 and owns up to being slightly biased. She’s also co-founder of PLAND and works for Dia/Walter De Maria’s The Lightning Field and the Frederick Hammersley Foundation.