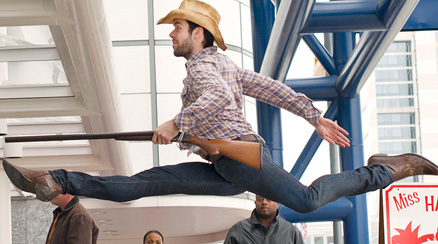 Houston Ballet’s Connor Walsh flying across the Gun Show as part of
Dancers Among Us. PHOTO BY JORDAN MATTERS.

The Houston Symphony will receive $35,000 from the National Endowment for the Arts (NEA) in support of its March 2013 production of a semi-staged version of Alban Berg’s opera Wozzeck.

The MFAH announced a historic agreement to bring objects from one of the greatest collections of Islamic art in the world to the MFAH on long-term loan. Beginning January 26, 2013, some 60 of these objects will go on public display in the new Arts of the Islamic World Gallery in the museum’s Caroline Weiss Law Building.

Young Texans Against Cancer and BlackFinn American Grille honored Houston Ballet Principal Melody Mennite as one of Houston’s Top 30 Under 30.  Director of production Tom Boyd will leave the company to pursue his career as a freelance scenic designer in January 2013. He will be working on a new production of Ben Stevenson’s Cinderella in the spring of 2013 for the Queensland Ballet in Australia, under the direction of former Houston Ballet Principal Dancer Li Cunxin.

Ashley Dennis is the new director of development at Dominic Walsh Dance Theater.

Josef Helfenstein, director of the Menil Collection, announced that independent curator Cuauhtémoc Medina has been chosen as the sixth recipient of the biennial Walter Hopps Award for Curatorial Achievement.

Stark Naked Theatre has changed their second play to Yasmina Reza’s God of Carnage, which will run from February 21st – March 9th, 2013. It will be the first time this play has been performed by Houston talent.