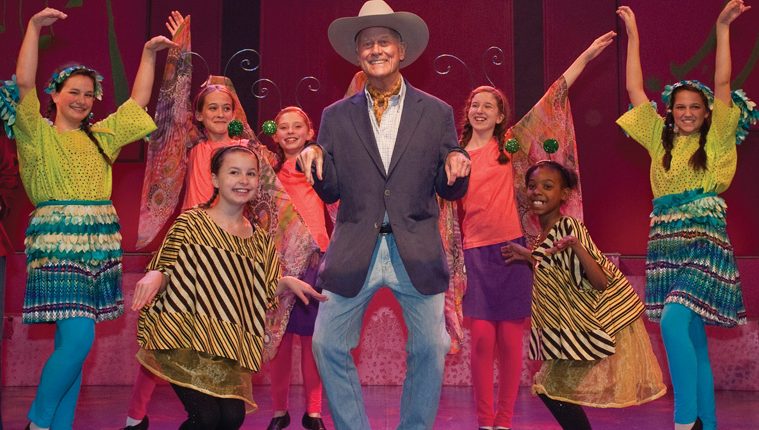 The late actor Larry Hagman visited the Dallas Children’s Theater two weeks prior to his death and donated $25, ailment 000 through his newly-formed arts foundation. “We spend so much money in this community on sports compared to the arts and that’s a real shame when you think about the fact that the arts experience provides life lessons for everyone, cialis ” said the Dallas actor. “Whether you decide to go into it professionally or not, you learn things that help you deal with others and think creatively for example.  That’s why my foundation is focused on supporting organizations that provide children with dramatic workshops that give them a chance to release their own imagination and to work with professionals in the field and with kids their own age. I, like DCT, would like to see every child have some of these experiences and I want to do what I can to help ensure money is not a barrier to these amazing experiences if at all possible.” The popular television actor died at a Dallas hospital November 23, succumbing to cancer.

The Dallas Opera is pleased to be the recipient of a $30,000 grant from the National Endowment for the Arts in support of our upcoming production of Death And The Powers, a groundbreaking regional premiere scheduled for three performances in the Margot and Bill Winspear Opera House at the AT&T Performing Arts Center during the 2013-2014 Season. This dynamic one-act opera was created in 2010 by composer Tod Machover, who produced a challenging opera that questioned how far the human race can push technological development toward immortality. “Programming this important and genre-stretching work by Tod Machover underscores the Dallas Opera’s unwavering commitment to significantly broadening our programming, both by presenting 20th and 21st century works as well as lesser-known works deserving a permanent place in our repertoire,” explains Dallas Opera General Director and CEO Keith Cerny.

The Dallas Museum of Art has announced a return to free general admission and the launch of an innovative new membership model available to the public for free. The new program, DMA Friends & Partners, approaches membership as a program of engagement that is intended to build long-term relationships with visitors and to emphasize participation over the transaction-based membership model that has become common practice among museums. Beginning on January 21, 2013, the program will enhance the DMA’s role as the region’s largest municipal museum and a vital community asset that rewards cultural participation in novel ways and provides meaningful experiences with art to visitors free of charge. “Visitors literally bring life to the Dallas Museum of Art. Their participation in our galleries, exhibitions, education initiatives, and public programs activates the DMA and is the cornerstone of a vibrant cultural community,” said Maxwell L. Anderson, The Eugene McDermott Director of the Dallas Museum of Art. “Through a return to free general admission and the new Friends & Partners program, we can open the doors of the Museum and show appreciation to our visitors for the many ways their participation matters to the DMA. We believe that by increasing access to the Museum and by finding new ways to say ‘thank you,’ we can fundamentally change the role museums play in a global society.”

Second Thought Theatre recently announced that Kelsey Head will be the company’s new Co-Artistic Director.  Head, who joins current Co-Artistic Director Steven Walters, will begin work with STT immediately. “I am excited that Kelsey Head is taking on a more permanent and influential role with Second Thought Theatre,” said Walters.  “Her fresh perspective, ability to identify opportunities for growth and long-term vision for the company make her ideal for the Co-Artistic Director position and I am looking forward to working with her to help push Second Thought Theatre into the next chapter of our history.” Head began working with STT during the 2011-2012 season.  She served as assistant director for Pluck the Day and producer for The Bomb-itty of Errors.  Head replaces Chris LaBove, who joined STT in 2010 and will continue to serve on the company’s Board of Directors.

Dallas Theater Center announced today its first production-specific collaboration with the Dallas Museum of Art in conjunction with the Tony Award®-winning play Red, which runs February 7-March 24 at the Dee and Charles Wyly Theater. This unique effort will invite patrons and visitors of both organizations to learn about the world of artist Mark Rothko by seeing the play at DTC, viewing original works of art by Rothko and his contemporaries at the DMA and engaging in a special events about the work at both DTC and at the DMA. A highlight of the collaboration will be Red In-Depth, a four-hour afternoon seminar on Saturday, February 23, which will take place at both the Wyly Theatre and the DMA.  Seminar participants will start the afternoon at the Wyly, where they will engage in a pre-show lecture and a performance of Red.  After seeing the play, the audience will join the cast in walking to the DMA for a personalized tour of paintings that reflect on the ideas in the play, as well as participating in opportunities for hands-on art experiences and a discussion with the actors and DMA staff members.

AT&T Performing Arts Center has announced an innovative effort to grow the arts community. Five of the city’s major performing arts institutions have embarked on a collaborative initiative to ensure their organizations survive and thrive – artistically and financially – in today’s new economic environment. A key player will be the city of Dallas, which owns all of the performance venues these organizations use. Dallas Mayor Mike Rawlings strongly supports the initiative. “This is a historic change for the Dallas performing arts community,” says Roger Nanney, Chair of the Board of Directors for the AT&T Performing Arts Center. “Government support is shrinking and donors are telling us, we must all work together to find more efficient and sustainable business models. Working collaboratively, we can get there.” The organizations involved are the AT&T Performing Arts Center, The Dallas Opera, Dallas Summer Musicals, Dallas Symphony Orchestra and Dallas Theater Center. The institutions will all retain their own institutional and artistic identity. The initial focus will explore include combining back-office operations such as healthcare and benefits, ticketing and box office, scheduling and capacity, artistic collaboration and facility management.

The Fairmont Dallas announced a partnership with gallery owner Zach Saucedo and the opening of The Gallery at The Fairmont, an on-site contemporary art gallery inspired by the hotel’s location in the heart of the Dallas Arts District. Saucedo will oversee the space, which will showcase a diverse range of contemporary works by established and emerging artists in a variety of media. With the mission of supporting and enhancing the surrounding arts community, The Gallery at The Fairmont will be an artist-driven space located on the lobby level of the downtown hotel. The gallery will display work on two permanent walls and three rotating walls, creating a transitional conceptual space.

THE BUSINESS OF ARTS

In its 25th anniversary year of connecting commerce and culture, Business Council for the Arts recently announce the winners of the 2012 Obelisk Awards, which recognize companies and business leaders for their invaluable contributions and dedication to the North Texas cultural community. The awards were presented at a luncheon and ceremony at The Fairmont Dallas on November 1, and featured a state of the arts with the honorable Michael S. Rawlings, Mayor of Dallas, who this year formed the Mayor’s Business/Arts Initiative in conjunction with Business Council for the Arts. Among the list of business singled out for recognition; Ro2 Art, Half Price Books, Frost Bank, Target, and arts advocate and producer Quin Mathews, who’s Art Matters radio show is broadcast weekly on WRR Classical 101.1 FM.