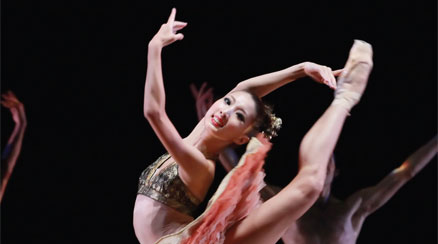 Houston Symphony President Robert A. Peiser and Executive Director and CEO Mark C. Hanson announced that the Orchestra has selected Colombian-born, Vienna-trained conductor Andrés Orozco-Estrada as its next Music Director. Orozco-Estrada, who will occupy the Roy and Lillie Cullen Chair, will serve as Music Director Designate during the 2013-14 season and will begin a five-year contract in the 2014-15 season.

The jurors for the 2013 Hunting Art Prize are Karlota Contreras-Koterbay, Curator at Slocumb Galleries in Johnson City, Tennessee; Jeanne Klein, Collector and Advisory Council Member of the Harry Ransom Center at The University of Texas; and Margaret Winslow, Assistant Curator of Contemporary Art at the Delaware Art Museum in Wilmington.

Jennifer McLafferty has joined River Oaks Chamber Orchestra (ROCO) as Director of Development. “We are delighted to have Jennifer join us as she brings a strong, proven fundraising background and enthusiasm for ROCO’s mission and vision for the future,” says ROCO founder/executive director and principal oboist, Alecia Lawyer.

The Galveston Artist Residency announced an open call for applications for the 2013-2014 Residency Year. Artists in residence will receive a studio, an apartment, a monthly stipend and the use of a bicycle. Deadline is March 8, 2013.

Catastrophic Theatre has moved in permanently to the old DiverseWorks theater space. The 2013 season will be announced shortly.

Musiqa has received the Chamber Music Association/American Society of Composers, Authors and Publishers (CMA/ASCAP) Award for Adventurous Programming of Contemporary Music for 2013. Musiqa has been invited to repeat its Sebastian Currier premiere piece, DEEP SKY OBJECTS, at Houston Space Center in February in the IMAX theatre.

Houston Ballet announced its 2013-2014 season, which is artistic director Stanton Welch’s tenth season. Highlights include new ballets by Christopher Bruce and James Kudula; Welch’s acclaimed versions of  The Merry Widow (with Amy Fote returning) and Swan Lake; and David Bintley’s Aladdin, along with masterworks by William Forsythe, George Balanchine and Jiří Kylián. Nozomi Iijima has been named 25 to watch by Dance Magazine, and Mireille Hassenboehler  has been named one of “Houston’s 50 Most Influential Women of 2012” by Houston Woman Magazine. Jean Joransen Ellis joins Houston Ballet as the new chief development officer. Promotions include Lauren Strongin to soloist and Jim Nowakowski to demi-soloist.

The Ensemble Theatre (TET) has met a $75,000 individual donor match challenge. By meeting the donor challenge, TET surpassed its inaugural 2012 Founder’s Circle Campaign goal of $250,000. “The donor challenge was achieved through the generosity of the greater Houston community, including honorary chairs, new and existing patrons, artists, friends, board members and staff, who invested in TET despite a tough economy,” said Janette Cosley, Executive Director.

Mitchell Center’s current artists in residence are Sehba Sarwar, (founder of Voices Breaking Boundaries) and Daniel Bernard Roumain, who is artist in residence with the UH Cougar Marching Band, and will be part of an event this April at Discovery Green.

Inprint will give out the first set of Inprint Marion Barthelme Literary Prizes this month, which honor of the memory of longtime Inprint Board Member and Houston arts philanthropist Marion Barthelme.