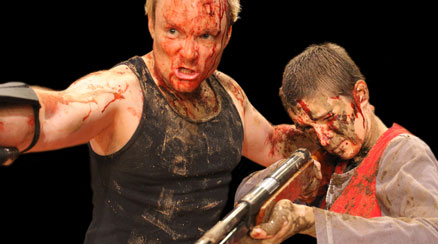 After a successful run in Houston, Henry V, a joint production of Main Street Theater and Prague Shakespeare Company, heads to Prague for an October  run. Main Street also launched the public phase of its capital campaign to purchase and renovate its Rice Village facility, where the theater has been creating nationally recognized productions for more than 30 years.  The Board of Directors made the decision to purchase the building and renovate it, bringing the physical theater up to the quality of the work onstage.

The Alley Theatre’s 2013-2014 season includes The Good Woman of Setzuan by Bertolt Brecht, Never the Sinner by John Logan, Other Desert Cities by Jon Robin Baitz, Venus in Fur by David Ives, Freud’s Last Session by Mark St. Germain, Good People by David Lindsay-Abaire, Communicating Doors by Alan Ayckbourn, and You Can’t Take It With You by Moss Hart and George S. Kaufman. The Alley Theatre also unveiled plans to enhance its artistic product and complete the first extensive renovation of its facilities since its opening in 1968 through a $73 million capital campaign.

Gulf Coast: A Journal of Literature and Fine Arts, the literary journal based at the University of Houston, merged with Art Lies, one of Texas’s most respected visual art magazines. The merger brings additional regional, national, and international exposure to the literary and visual arts culture of Houston.

The Bridge Club performance collective has been selected to perform in the Currents New Media Festival in Santa Fe, New Mexico.

Sixto Wagan has been appointed the inaugural Director of the Center for Arts Leadership at the University of Houston. Wagan steps down as artistic director of DiverseWorks since 2011, after 11 years with the organization.

Ana Calderon Lemes has joined Houston Ballet’s corps de ballet. A Grand Prize winner from the Princess Grace Foundation of Monaco, Lemes has   been a member of Zürich Ballet and Barcelona Ballet.